Intensifying competition could weigh on the biotech's growth.

Shares of Sorrento Therapeutics (SRNE -6.51%) declined on Monday after a new competing saliva-based COVID-19 test received emergency use authorization from the Food and Drug Administration. By the close of trading, Sorrento's stock was down 3% after falling as much as 18% earlier in the day.

Sorrento's stock price rose sharply in late July and early August after the biopharmaceutical company signed a licensing agreement with Columbia University for a saliva-based rapid diagnostic test that detects the novel coronavirus in as little as 30 minutes. Sorrento believed that, if approved by regulators, the test could be used in a wide variety of settings, such as airports and sporting events, as well as for at-home testing. 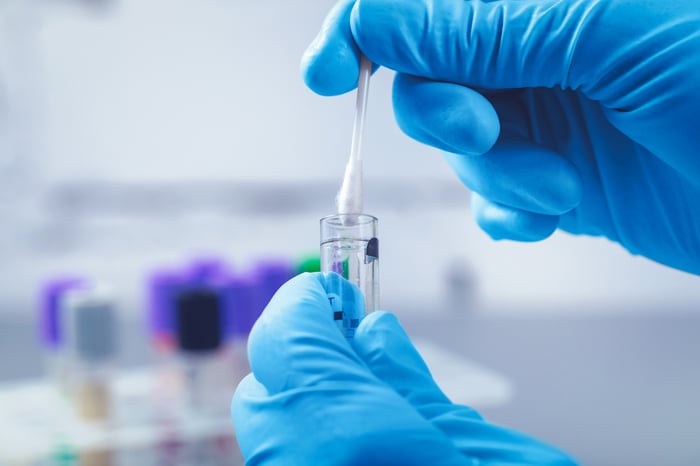 But on Saturday, the Yale School of Public Health said the FDA had granted its saliva-based diagnostic test (which had been funded in part by the NBA and National Basketball Players Association) an emergency use authorization. Yale says the test, called SalivaDirect, is "highly sensitive" and produces results similar to nasal-swab-based tests. It's also inexpensive, with an expected cost of roughly $10 per sample.

The emergence of Yale's COVID-19 test could reduce the potential market opportunity for Sorrento's test. But it's important to note that Sorrento's procedure does not need to be completed in a laboratory, which could make it more attractive than Yale's method in certain settings. Perhaps that's why Sorrento's stock recovered most of its losses by the market close.