Please ensure Javascript is enabled for purposes of website accessibility
Log In Help Join The Motley Fool
Free Article Join Over 1 Million Premium Members And Get More In-Depth Stock Guidance and Research
By Will Healy - Updated Aug 18, 2020 at 12:03PM

The future appears bright for these undervalued stocks.

Technology stocks have a reputation for pricey valuations. Many of the world's highest market caps are attached to tech companies that have built or revolutionized their industries. Thus, when start-up tech companies lead in an emerging industry, investors often bid up their share price, hoping for a big payday.

But not every tech stock is overpriced. Here are three that could see outsize gains as more investors discover their potential: Amkor Technology (AMKR 3.74%), Broadcom (AVGO 2.35%), and Verizon Communications (VZ 0.83%). 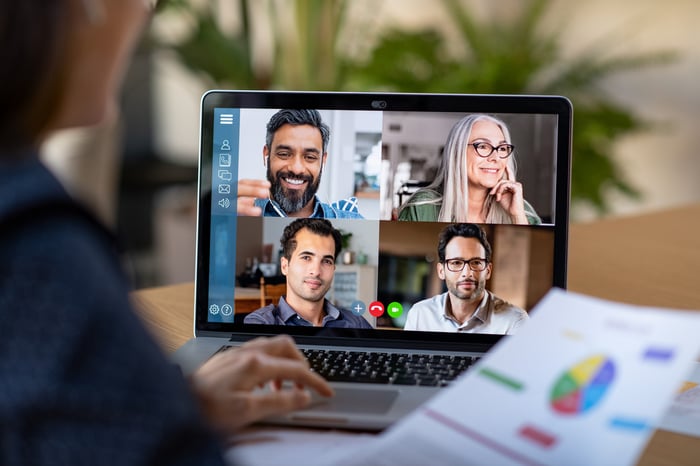 Amkor provides test and packaging services to semiconductor companies. While investors may not know its name, the company plays a critical behind-the-scenes role in the chip industry. Smartphones, televisions, and data centers all use its products.

In the most recent earnings report, on July 27, the company appeared largely immune to the effects of COVID-19 as smartphone and consumer products sales rose. These two segments now make up 65% of company revenue. The company forecasts continued growth, particularly in the smartphone sector as customers upgrade to 5G models. Analysts forecast that earnings will increase by 102% in the current fiscal year.

Investors need to remain conscious of the stock's cyclical nature. Earnings in the second quarter of 2018 were $0.14 per share. Both the chip industry and its segments deal with sales cycles that can cause earnings to ebb and flow. Moreover, Amkor trades near a multiyear high. Understandably, these factors might concern investors as to the near-term future of the stock. 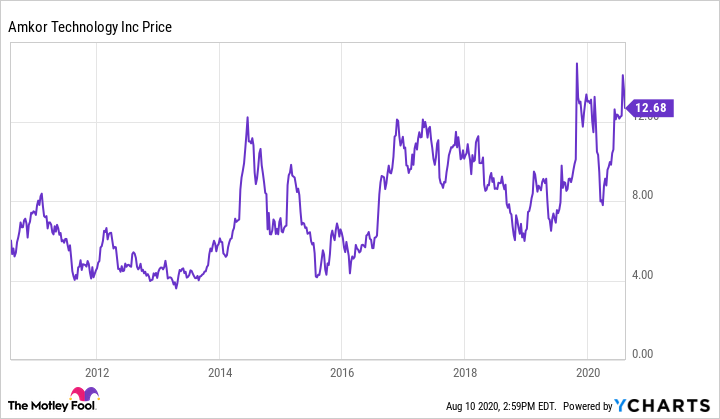 However, Amkor sells at a forward P/E ratio of 12.6, slightly over half its five-year average forward multiple of 22.1, indicating the stock trades at a significant discount.

Additionally, the rise of 5G will likely bring about new sales in segments of the chip industry such as smartphones. Amkor President and CEO Giel  Rutten was quoted in a company press release as saying that the company has a "strong footprint" in this area. Rutten also believes that existing growth drivers and new investments will help drive expansion.

Broadcom has become one of the world's largest chipmakers through acquisitions. What was then called Avago bought Broadcom in 2016, adopted that company name, and moved the company headquarters from Singapore to the U.S.

Broadcom manufactures chips for a wide variety of applications. It has also ventured into software with its purchase of CA Technologies and Symantec's enterprise software unit.

Enterprise software made up almost 30% of revenue in the most recent quarter. This segment's revenue growth of 21% came in well above the company's overall revenue growth rate of 4%.

This growth is helping Broadcom weather the COVID-19 crisis. Its stock bounced back from a steep decline in February and March, and it now trades near all-time highs. 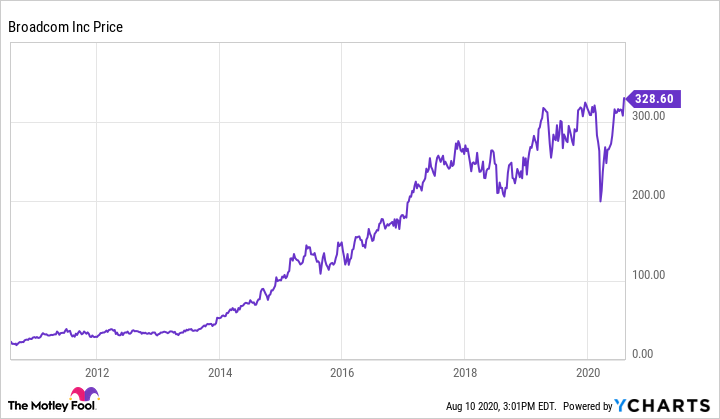 Even with its near-record stock price, Broadcom stock sells for around 13.5 times forward earnings estimates. That is well under the S&P 500's forward P/E of about 22, but not materially different from the company's forward multiples in recent years.

Moreover, while forecasting only 0.8% profit growth this year, analysts expect an 11.6% earnings increase in fiscal 2021. The company expects that the growth of networking, storage, deep learning inference chips, and software will remain strong during and after the COVID-19 crisis.

Furthermore, investors benefit from an annual dividend of $13 per share, offering a yield of just under 4% at the current stock price. That $13 per share is is 23% higher than last year's annual payout.

Given these conditions, investors can buy this growth stream at a reasonable price and earn income from the dividend while waiting for future increases.

Verizon is one of three nationwide companies that will offer 5G technology, along with AT&T and T-Mobile. Given the tens of billions of dollars in capital expenditures required for such an endeavor, the industry will probably not see any additional competitors. In 2019, Verizon spent almost $18 billion in capital expenditures, much of that invested in its 5G network.

Many expect 5G's much faster speeds to not only transform mobile communications but also fundamentally change non-tech industries ranging from textiles to farming. For this reason, nobody knows how much 5G will ultimately benefit the company and its peers. However, the more need society has for 5G, the better Verizon and its peers will probably perform.

For investors looking for a growth and income name, Verizon is a likely choice. The stock has roughly doubled in value over the past 10 years, well ahead of the stock price growth in AT&T. While T-Mobile saw more growth, Verizon offers something that T-Mobile does not: a dividend. This payout, $2.46 per share for this year, yields about 4.2% at the current stock price. Also, the dividend has increased every year since 2007. 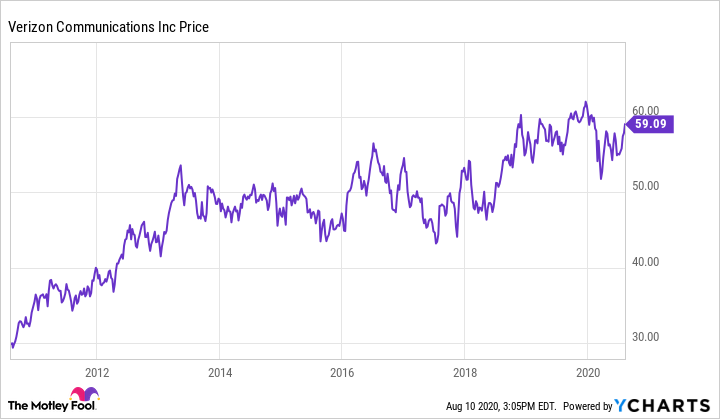 Additionally, the company sports a forward P/E ratio of approximately 12.2. likely because analysts forecast little profit growth in the near term.

However, the future of communications appears tied to 5G. Since Verizon is one of only three providers of what looks to be an essential service, the company will command oligopoly power in an essential industry.

As 5G enables innovation, both the multiple and the stock price could move significantly higher.