Please ensure Javascript is enabled for purposes of website accessibility
Log In Help Join The Motley Fool
Free Article Join Over 1 Million Premium Members And Get More In-Depth Stock Guidance and Research
By Nicholas Rossolillo – Jun 9, 2020 at 7:57AM

Shares are back at their all-time highs even in this period of economic uncertainty.

Networking hardware and software management giant Broadcom (AVGO -1.37%) reported Thursday on its fiscal 2020 second quarter, which included the worst of the global coronavirus crisis. In spite of extreme uncertainty, the report card was solid, as was the company's outlook for the upcoming summer months.

Not entirely unexpected was the news that demand from networking customers -- including cloud computing and network storage -- rose when the world was shoved further down the digital road because of work-from-home and shelter-in-place. What was unexpected was Broadcom's top brass reporting that demand for some products has grown so great that it's having difficulty keeping up, offset by a sharp drop in smartphone demand and a right-sizing of the company's network software portfolio (which was patched together via its acquisitions of Brocade, CA Technologies, and most recently Symantec). 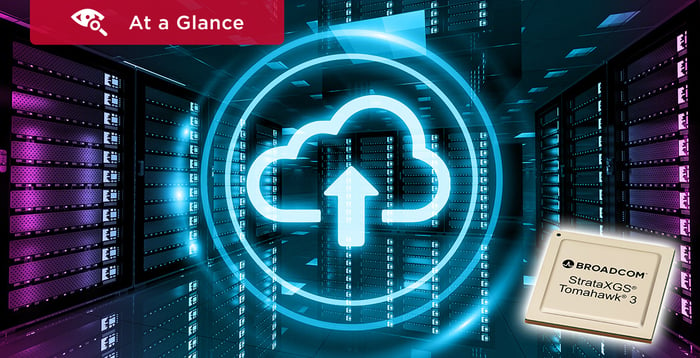 As a Broadcom shareholder, I'm more than pleased with the report for the period, which ended May 3. After a big dip in March, the stock is back to setting all-time highs, and the company remains committed to its dividend in spite of the unpredictable times. I'll take it, although for me, the stock and its current 4.2% yield act as an income component (instead of bonds) within my portfolio as this hardware giant is long past its days of high growth.

But because it's a chipmaking (and now also software) titan, its report contained plenty of interesting notes that have a bearing on those segments of the semiconductor industry that are still very much in high-growth mode.

Broadcom's fiscal Q2 results were in line with the guidance provided a few months ago when this crisis was just beginning to rock and roll. Revenue rose 4% year over year to $5.7 billion, with a 2% decline in the semiconductor segment ($4 billion) and a 21% increase in infrastructure software ($1.7 billion) where most of the gains came from the takeover of Symantec in November. On a sequential basis, semiconductor sales were down 4% and software sales up 3%. Free cash flow (revenue less cash operating and capital expenses) also set a company record, rising 21% to $3.1 billion.

All in all, it was a great report given the current state of world affairs. But as with all things business, the future is of far more importance than the past. And on that front, CEO Hock Tan said that fiscal Q3 will be full of "puts and takes." Demand for networking, storage, AI inference chips (mainly for the cloud), and broadband is expected to grow by double-digit percentages sequentially in Q3. However, that is going to get offset by the wireless segment, which dropped 14% sequentially in Q2 (normal seasonality) and is expected to fall again sequentially in Q3 (not normal seasonality). Blame the coronavirus, which has withered demand for new phones.

On the software side, Tan said that Symantec is now fully integrated with the rest of the infrastructure management business. Bookings in the company's large core accounts have been growing as the company cross-sells software services, more than offsetting the abandonment of Symantec's smaller commercial accounts that don't make sense for Broadcom to continue taking care of. As a result, year-over-year software growth will slow substantially in Q3.

While a mixed bag to be sure, Broadcom is clearly holding up just fine during this crisis. In fact, for some portions of its semiconductor business, Tan said, "Bottom line, in Q3, we really have much more demand than we can supply, and this may very well continue beyond Q3."

While I'm happy with Broadcom's results and outlook, and the resulting jump in share price, I think this could be even better news for other companies in the networking hardware and cloud arenas. Chief among them is NVIDIA (NVDA -2.30%), which recently completed the acquisition of small-but-rapidly-expanding Mellanox, a Broadcom competitor in the networking hardware space. There remain some doubters about how long NVIDIA can maintain the 40% year-over-year sales growth pace it has managed recently, but adding Mellanox to the mix will certainly help. And I believe adding high-speed networking gear to NVIDIA's graphics processing units (to avoid any bottlenecking of data computation, like for AI in the cloud) will make them even more of a force to be reckoned with.

And then there's CrowdStrike Holdings (CRWD -0.65%), which also recently reported another big surge in sales. One reason given for its latest stellar quarter was Symantec's choice to abandon its smaller accounts, which gave CrowdStrike an opportunity to swoop in with its cloud-based endpoint security. So it isn't new news, but Broadcom saying directly that it will continue to "rightsize" its Symantec enterprise security acquisition provides more reason to be optimistic about cloud security upstarts.

Long story short, Broadcom's report should ease any lingering worries that the pandemic could cause some tumbles in semiconductor and networking demand down the road. Indeed, it further demonstrated that the coronavirus is driving businesses' use of cloud and networking systems higher, and there's no sign of that growth letting up anytime soon.