Please ensure Javascript is enabled for purposes of website accessibility
Log In Help Join The Motley Fool
Free Article Join Over 1 Million Premium Members And Get More In-Depth Stock Guidance and Research
By Keith Speights – Updated Aug 18, 2020 at 9:08AM

The biotech could find itself in a spitting contest of sorts now that a new COVID-19 test is available.

Groundbreaking. Game-changer. Those are the kinds of words being used to describe SalivaDirect, a COVID-19 diagnostic test developed by the Yale School of Public Health. The U.S. Food and Drug Administration (FDA) granted Emergency Use Authorization to SalivaDirect on Aug. 15, 2020.

SalivaDirect appears to be deserving of the accolades that are being bestowed upon it. A saliva-based diagnostic test will enable convenient and quick testing that could be critical in the fight against COVID-19. But could this coronavirus game-changer be bad news for Sorrento Therapeutics (SRNE 3.55%)? 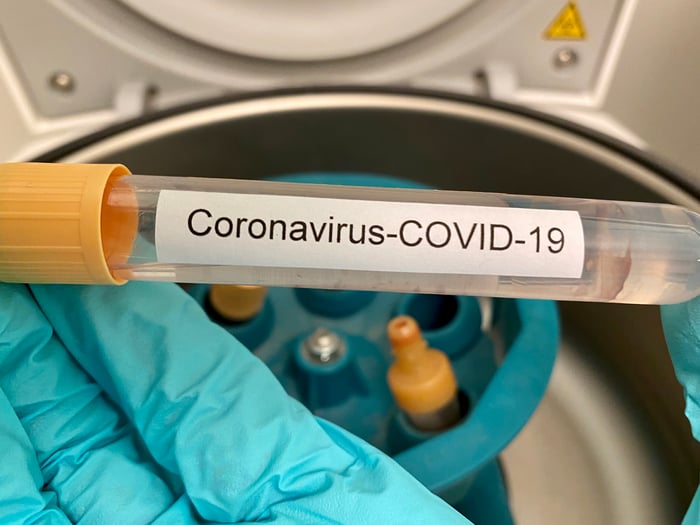 Yale isn't the only Ivy League university that developed a saliva-based COVID-19 diagnostic test. Columbia University researchers also created a test that can detect the presence of the SARS-CoV-2 virus in a saliva sample.

Sorrento announced on July 29, 2020, that it licensed the rights to Columbia's COVID-19 test using saliva samples. The company plans to market the test under the COVI-TRACE brand name.

COVI-TRACE isn't available yet. Sorrento CEO Henry Ji said that his company "intend[s] to move rapidly to submit an emergency use authorization request to the FDA and prepare for full-scale production." He stated that "COVI-TRACE will be a key asset in our diagnostic solutions," adding that the test "could become the 'economy opener' our country has been waiting for."

The market should be big enough to support multiple saliva-based COVID-19 tests just as several tests using nasal swabs are selling really well currently. In fact, the FDA has already granted Emergency Use Authorization to four other coronavirus diagnostics tests that use saliva samples. So why would Yale's SalivaDirect present a major threat to Sorrento's plans? The price tag.

Yale plans to open source the SalivaDirect protocol. Any lab that follows this protocol could perform the test using standard testing components.

Andy Slavitt, former Centers for Medicare and Medicaid Services acting administrator in the Obama administration, tweeted that the costs of the materials needed to perform the test are around $4. He predicted that the total cost of the test would likely be close to $10 -- a lot less than the $100 for current COVID-19 diagnostics tests.

Spitting into the wind?

Will SalivaDirect's low cost be a showstopper for Sorrento? No. For one thing, Sorrento should be able to compete on attributes other than price. COVI-TRACE can be used at the point of care without having to send the test off to a lab. A saliva sample is mixed with enzymes and reagents in a tube then heated for 30 minutes or less. The color of the mixture reveals whether or not the saliva sample contained SARS-CoV-2.

Sorrento also hopes to eventually crank up production of COVI-TRACE to high enough levels that it can price the test competitively with SalivaDirect. However, investors appeared to be at least a little concerned about the potential disruption from Yale's open-source testing protocol. The biotech stock fell more than 4% on Monday.

Editor's note: An earlier version of this article stated that Sorrento could price the COVI-TRACE test much higher than $10 and implied this could be problematic for the company. The company has stated that it would seek to scale up production enough to price the test near the $10 level. The Fool regrets the error.