Please ensure Javascript is enabled for purposes of website accessibility
Log In Help Join The Motley Fool
Free Article Join Over 1 Million Premium Members And Get More In-Depth Stock Guidance and Research
By Timothy Green – Aug 19, 2020 at 8:30AM

And it’s still a bargain.

Hanesbrands (HBI 2.90%), which manufacturers basic apparel and activewear under the Hanes and Champion brands, depends heavily on brick-and-mortar retailers. In 2019, around 82% of U.S. sales were to retailers and wholesalers. About 25% of total sales came from Walmart and Target, 7% came from mid-tier department stores, and 22% came from other U.S. customers, including Costco and DICK'S Sporting Goods .

Given this dependence on physical retail, it's not surprising that the pandemic has wreaked havoc on Hanesbrands' core business. Sales of activewear, for example, were down a whopping 62% in the second quarter. Hanesbrands stock was hit hard in March as investors anticipated a rough road ahead for the apparel company. Shares were cut in half between the end of February and early April, bottoming out at around $7.

Since early April, Hanesbrands stock has entirely recovered, more than doubling from its pandemic low. A rising stock market partly drove this rally. But in the past few weeks, the rally has been fueled by shockingly good results. 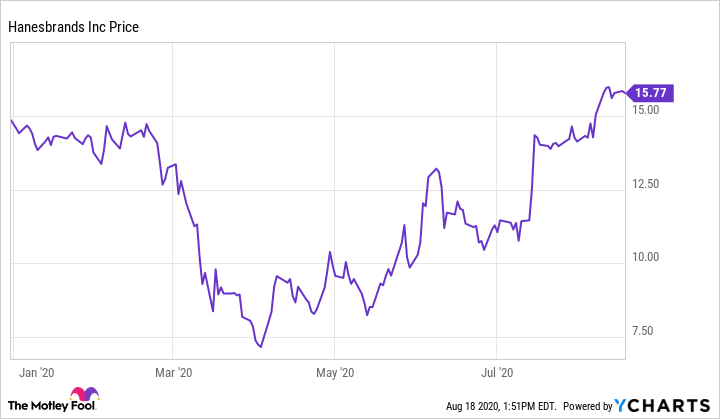 Hanesbrands reported its second-quarter results on July 30. Despite steep declines in its traditional lines of business due to store closures, the company managed to keep its revenue nearly flat compared to the prior-year period. Earnings per share jumped 12%, and adjusted earnings per share soared 60%.

Of all apparel companies, Hanesbrands was perhaps the best positioned to take advantage of booming demand for personal protective equipment (PPE). The company owns and operates many of its own manufacturing facilities, allowing it to quickly pivot toward in-demand masks and medical gowns. Hanesbrands delivered 450 million cloth masks and 20 million medical gowns to the U.S. government during the second quarter.

In total, the company generated $752 million in sales from PPE in the quarter, accounting for about 43% of revenue. PPE drove innerwear sales up 66.5% to $1.09 billion. Excluding PPE, innerwear sales would have sunk nearly 27%.

This PPE business won't generate so much revenue indefinitely, but Hanesbrands does expect it to be an ongoing opportunity. The company expects to generate around $150 million of PPE revenue from consumers in the second half of the year via retail sales, and it sees this business potentially generating between $200 million and $300 million on an annual basis. The company will also go after more government contracts. 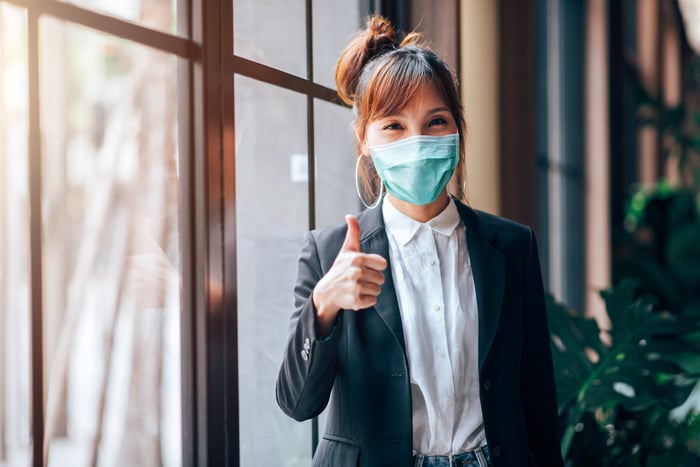 With stores largely reopened across the United States, Hanesbrands has seen sales trends improve. In the innerwear business, point-of-sale trends excluding PPE accelerated throughout the second quarter and turned "significantly positive" in May and June. For innerwear intimate apparel, point-of-sale trends reached pre-pandemic levels in July.

The activewear business is improving as well, with point-of-sale trends for the Champion brand improving throughout the quarter. Notably, sales through the revamped Champion.com website almost tripled in the second quarter.

Hanesbrands expects continued improvements in the second half, although it isn't providing any guidance due to uncertainty. Barring substantial new government contracts for PPE, the third quarter will likely be weaker than the second quarter as the core business recovers.

Based on pre-pandemic numbers, Hanesbrands trades for less than 10 times 2019 earnings, even after doubling from its April low. It will take time for the company to fully recover, and a long recession could extend that recovery as consumers delay purchases. But Hanesbrands is in a much better place than it would have been absent the new PPE business.

Choppy results over the next few quarters will test the rally in Hanesbrands stock, and another steep decline is possible if the stock market turns over. But for long-term investors, Hanesbrands is a solid value stock in a stock market that's looking increasingly frothy.