Please ensure Javascript is enabled for purposes of website accessibility
Log In Help Join The Motley Fool
Free Article Join Over 1 Million Premium Members And Get More In-Depth Stock Guidance and Research
By Chad Henage – Aug 20, 2020 at 6:42AM

Just when it seemed the athleticwear company might be getting back on its feet, management runs a play we've seen before.

By the middle of 2016, Under Armour (UAA -1.93%) (UA -2.06%) had achieved an impressive milestone of 25 consecutive quarters with at least 20% revenue growth. But investors fell in love with the stock right about the time it started to come apart at the seams. Four years later,  Under Armour is still acting like a growth company ... without the actual growth to back it up. Let's review the three reasons why the stock's still struggling, and see whether it looks likely to regain investors' overt ardor anytime soon.

Under Armour's lack of a clear brand image provides the first reason to beware its shares. After the company's most recent earnings, Susquehanna Financial Group analysts led by Sam Poser openly questioned whether Under Armour should be considered a "premium" brand. 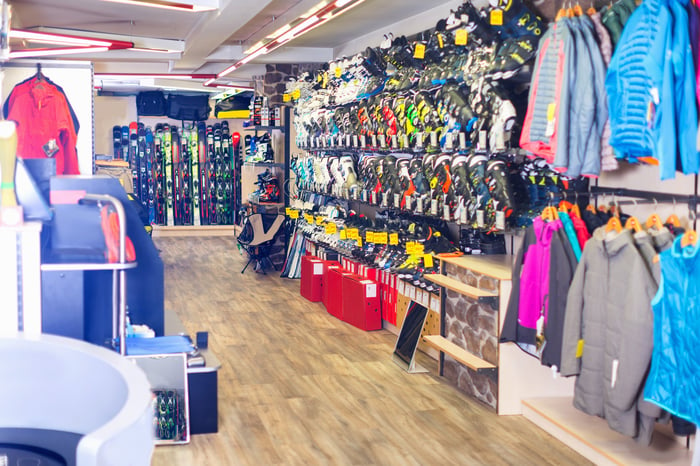 The pandemic has hurt  many apparel companies, including Under Armour and its peer Nike (NKE -1.55%). However, as Patrik Frisk, CEO of Under Armour, pointed out on the Q2 2020 conference call, China looks "two months ahead of the curve" compared to the rest of the world. Frisk said consumers there have started shopping again, but not yet at pre-pandemic levels.

This comment stands in stark comparison to what Nike's China business experienced during the same time frame. Nike CEO, John Donahoe, said that in China, monthly active users of Nike's Trending app had increased more than 350% since the beginning of 2020. The increase in users resulted in Nike's China business returning to growth in the fourth quarter. With Under Armour facing brand challenges domestically, it's not surprising that Under Armour's blurry branding is creating issues internationally as well. Given Under Armour's performance relative to Nike, it's difficult to see Under Armour's shares outperforming its rival's anytime soon.

In 2015, Under Armour was a growth stock, and investors were happy to be along for the ride. Investors are usually OK with fast-growing companies spending on expansion if revenue grows faster than their industry or the market overall. Where fast-growing companies run into trouble is when they continue to spend like they are in fast-growth mode, even when their revenue can no longer keep up.

This brings us to the second reason investors should avoid Under Armour: its out-of-control selling, general, and administrative (SG&A) expenses. The company's SG&A expenses came in at roughly 67% of revenue in the last quarter, compared to 50.5% for Nike.

If Under Armour were less efficient for one quarter, investors could possibly ignore the issue, but this isn't a short-term challenge. 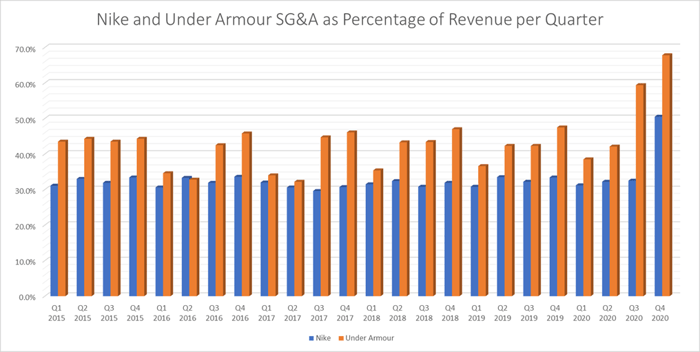 With Under Armour consistently spending a higher percentage on SG&A than Nike, it seems management could do a better job of controlling expenses. In fact, SG&A isn't the only item that Under Armour management needs to get a better handle on.

The third reason to avoid Under Armour stock is the company's 800-pound inventory gorilla. Last August, on a Motley Fool podcast, MFAM Funds CIO Bryan Hinmon said, "Under Armour had suffered for years from basically poorly managing its own inventory and flooding the market, which hurts the brand and causes them to have to cut prices." He also noted that CEO Frisk was focused on improving inventory management. If this were the end of the story, Under Armour would still be at a disadvantage, but getting better relative to its peer. However, Nike and Under Armour's current quarterly results suggest the latter may be moving in the wrong direction again. In its most recent quarter, Under Armour carried inventory equal to 169% of sales, compared to 117% for Nike.

The problem lies in how each company plans to solve its abundance of inventory. On its most recent conference call, Nike CFO Matthew Friend said, "we are confident that Nike inventory will be rightsized and in a normal position in Q2," while CEO Donahoe said, "our discounting is less than what we're seeing across the broader marketplace." The company also said its strong brand is allowing Nike to move through inventory faster than the rest of the marketplace.

In contrast, Under Armour's CEO Frisk said he expects the rest of the year will be, "undoubtedly punitive to our top line given an expectation of higher discounting and promotions across our space in the second half of the year." Each company seems to have a plan to get inventory under control over the next six months, yet the devil is in the details.

Under Armour faces brand challenges, spends relatively more on SG&A than its peer, and carries more inventory. This once fast-growing stock has stagnated recently, and its problems aren't quickly solvable. Unless Under Armour can solidify its brand and improve its financials, investors are likely best off avoiding its shares.