One interesting item concerning JPMorgan Chase (JPM 4.68%) has gone unnoticed amid the flood of recent news about the U.S. Postal Service (USPS). An article published Wednesday in The Capitol Forum and disseminated in other media quoted an internal document from the USPS as saying that, "The Postal Service is in discussions with JPMorgan Chase concerning a potential limited pilot test of ATM and other banking services located on Postal Service premises in several states."

JPMorgan Chase confirmed this. A CNBC article quoted company spokeswoman Trish Wexler as saying that, "We had very preliminary conversations with the U.S. Postal Service several months ago about what it might look like to lease a small number of spaces to place ATMs to better serve some historically underserved communities." 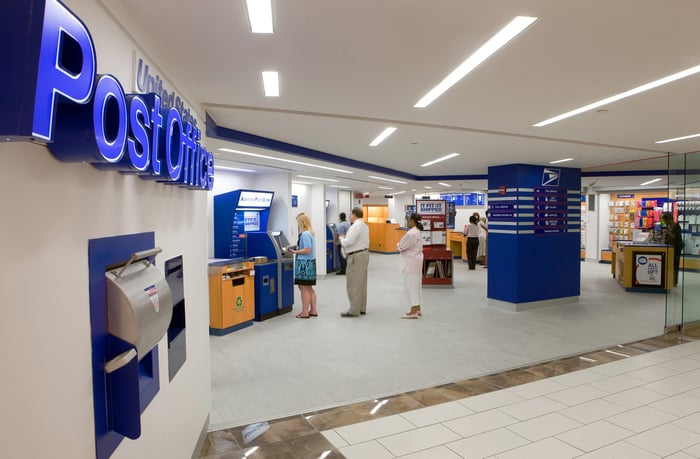 She stressed that the two sides have not made any agreements. Additionally, there are "no imminent plans to move forward."

The USPS has not yet officially commented on the discussions.

Over the years, there have been calls from consumer advocates for the USPS to establish and operate a proprietary banking service. Forms of this exist in numerous countries around the world. Proponents say that such an offering could provide basic banking services at reasonable prices in a consumer-friendly manner. Presidential candidate Joe Biden has formed a task force to study this possibility.

In addition to delivering the nation's mail, the USPS operates and manages a vast network of roughly 31,000 post offices around the country. At that size, if a shareholder-owned bank were to provide services at even a slight profit margin, it would stand to make a significant amount of revenue from the activity.

JPMorgan Chase's shares slumped to close 1.2% lower on Thursday, in contrast to the gains recorded by the broader stock market.