The computing powerhouse is ready to address a much bigger market than it's targeted in the past.

Computer technology company NVIDIA (NVDA 7.20%) did something last quarter that it had never done before. It collected more data center hardware revenue than gaming-related sales.

Granted, the acquisition of Mellanox that closed in late April helped, but it wasn't a massive boon. CFO Colette Kress noted that Mellanox only made up about 30% of the data center division's top line, which was up a massive 167% year over year and higher by 54% compared to the fiscal first quarter's tally. Its new Ampere GPU architecture appears to be doing most of the heavy lifting; institutions that need heavy-duty computing power know they can get it with that tech. 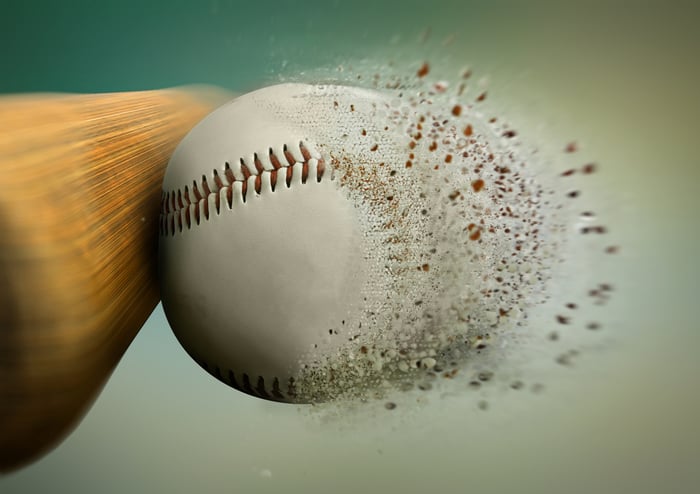 For the three-month stretch ending in July, NVIDIA turned $3.87 billion worth of revenue into per-share earnings of $2.18 per share. The top line was up 50% year over year, and earnings improved to the tune of 76%. COVID-19 doesn't appear to be taking much of a toll, if any. The bulk of that growth came from the company's aforementioned data center arm, which racked up sales of $1.75 billion, surpassing gaming's total business of $1.65 billion. Game-related revenue, however, was only up a more modest 24% year over year.

The disparity extends a trend that's been building for several quarters now.

While NVIDIA's been a perennial competitor with gaming GPU name Advanced Micro Devices (AMD 12.63%), the company's full-scale attack on the dominance Intel (INTC 2.87%) has enjoyed within the data center arena is relatively new. It began in earnest in 2017 when NVIDIA debuted its open source HGX-1 system powered by eight Tesla P100 GPUs, capable of accelerating artificial intelligence calculations. By 2018 that effort had evolved into the Tesla T4 GPU and its corresponding TensorRT software, meant to usher in the use of artificial intelligence for video and image recommendations services. Most recently, the technology company's Ampere architecture is third-generation artificial intelligence hardware in a couple of different ways. Customers have increasingly loved each evolution, as evidenced by the continued growth of the company's data center unit. 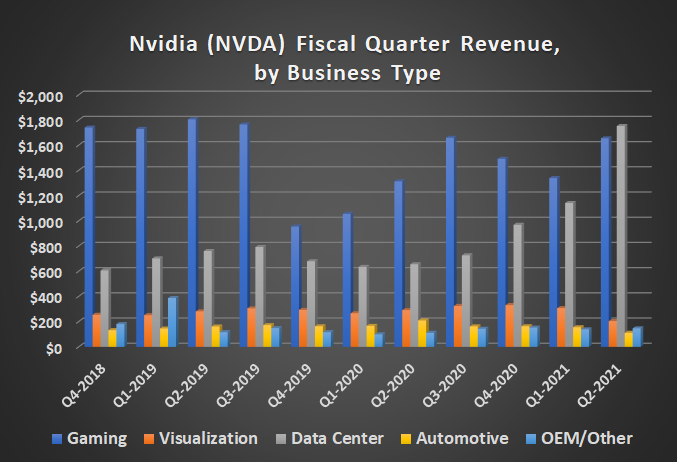 Data source: NVIDIA. Chart by author. All figures are in billions of dollars.

The right place to be

It's exactly where NVIDIA wants to be too, given the scope of the opportunity.

Estimates of just how big the data center market is vary from one source to the next. They're all huge, though. Many peg the current market somewhere around $150 million, while IT market research outfit Gartner puts the figure closer to $200 billion. Gartner also cautions it will shrink by about 10% this year as the world adjusts to the COVID-19 headwind, but even so, the research company anticipates a data spending rebound to take shape beginning in 2021.

That's a lot of money, and with Intel's persistent foundry/production woes, a huge chunk of it is up for grabs that otherwise wouldn't have been.

The more compelling aspect of the data center story for investors is its potential. A handful of estimates suggest that the market could expand by another 50% by 2025, led by the advent of artificial intelligence solutions NVIDIA is already providing. As the company noted in its fiscal second-quarter report, NVIDIA hardware powers eight of the world's 10 fastest supercomputers. It also announced that over 50 Ampere-powered server systems were planned during the quarter in question, just within a month of the tech's availability.

NVIDIA is clearly doing something right.

That's not to suggest the gaming GPU market is one the company should ignore. But it's not where the big opportunity lies.