Please ensure Javascript is enabled for purposes of website accessibility
Log In Help Join The Motley Fool
Free Article Join Over 1 Million Premium Members And Get More In-Depth Stock Guidance and Research
By Will Healy – Aug 21, 2020 at 8:15AM

Microsoft (MSFT -0.04%) and Alphabet (GOOGL -1.02%) (GOOG -1.24%) are two tech giants that frequently find themselves in competition with one another. Microsoft founder Bill Gates said that beating Android in the mobile computing market was a "$400 billion mistake" he regrets making while in charge of the company. Meanwhile, Alphabet has not managed to catch up to the software giant when it comes to its cloud computing efforts.

Clearly, both companies have had their share of huge hits (Office 365 and YouTube) and puzzling misses (Zune and Google Glass) over the years, and both are considered successful operations these days.

The astounding success of these "trillion-dollar" tech stocks may lead investors to wonder which company offers the highest potential returns going forward. Let's compare the two to find out.

When measured by market cap, Microsoft has become the second-largest company listed in the U.S., lagging only behind Apple, with a market cap of nearly $1.6 trillion. It is also one of only two U.S. companies to maintain a AAA credit rating with Moody's (the other is Johnson & Johnson).

For several years, Microsoft struggled to find growth as a trending slump in PC sales effectively flattened the stock price. However, a change in leadership and corporate focus by current CEO Satya Nadella has helped partially reinvent Microsoft as a cloud company and given it new revenue streams to explore. In doing so, Microsoft has become the primary competitor to market leader Amazon (AMZN -0.77%) in the lucrative cloud computing space.

Microsoft stock now sells for a forward P/E ratio of around 32. This is well above the company's five-year average forward multiple of just over 23. Also, despite the coronavirus pandemic, profit growth has remained steady. Analysts forecast earnings increases of just over 12% for this year and almost 14% in the next fiscal year.

Moreover, the company now holds $136.5 billion in liquidity. This made it easily able to cover dividend costs last quarter, which were just shy of $3.9 billion. The dividend, currently at $2.04 per share, yields just under 1%. This payout began in 2004 and has risen annually in all but two of those years. Further, its dividend payout ratio, or percentage of net income paid in dividends, is just over 35%.

In contrast, Alphabet does not offer a dividend. However, with a market cap of just over $1 trillion, Alphabet is still a tech giant and it grew to this position by dominating internet search, an area where Microsoft has tried and failed to best Google. Alphabet's search engine made it the largest player in the internet ad space, an area where it remains by far the market leader.

Alphabet is working to catch both Microsoft and Amazon in cloud computing, where it is in third place by market share. Moreover, it spawns a tremendous amount of innovation in numerous tech sectors. Autonomous car pioneer Waymo and Verily Life Sciences are two of several ventures that Alphabet is pursuing in an effort to diversify its operations.

Alphabet stock trades at a forward multiple of just above 35. This is significantly above its five-year forward valuation of around 24. However, profits have suffered in 2020 as yearly ad revenue fell because of the coronavirus pandemic. Analysts predict a decline in earnings of over 10% for this year before moving higher by 28% in fiscal 2021.

Nonetheless, with more than $121 billion in liquidity, Alphabet also remains in a strong position financially. While ads still make up a majority of its revenue, it holds enough investment cash to open new business lines to reduce dependence on advertising.

Both companies should remain long-term winners for the foreseeable future. However, I have to give the edge to Microsoft. The fact that it offers the slightly lower forward multiple and the steadier earnings growth does not hurt. Moreover, its success in the cloud has helped keep it steady amid the pandemic. Consequently, it has seen almost double the percentage growth as Alphabet over the last 12 months. 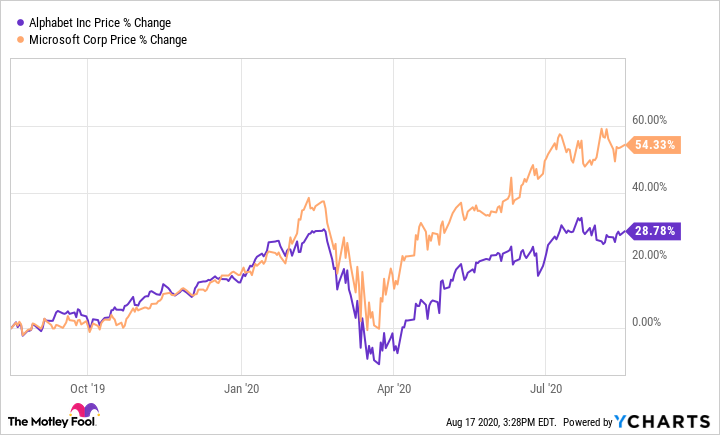 Alphabet continues to get in its own way. This goes well beyond the heavy dependence on ad revenue. The fundamental problem is that it locks up too much of its value. Part of that is the refusal to offer dividends, which dissuades income-oriented investors.

Even more significantly, Google properties make up more than 99% of Alphabet's overall revenue. However, one estimate places Waymo's value at $30 billion, more than 10% of the stockholders' equity of about $278.5 billion. Such disparities could leave investors wondering how much the sum of the parts exceeds the value of the whole.

If Alphabet begins to pay dividends, log significant growth outside of Google, or spin off divisions, I would recommend Alphabet stock. However, with its successful cloud business, Microsoft looks like the better buy in the current environment.