Please ensure Javascript is enabled for purposes of website accessibility
Log In Help Join The Motley Fool
Free Article Join Over 1 Million Premium Members And Get More In-Depth Stock Guidance and Research
By Royston Yang – Aug 26, 2020 at 6:08AM

There is a lot of uncertainty about how the economy will fare post-pandemic. But here are two businesses you can likely hold for the rest of your life.

The COVID-19 pandemic has unleashed an economic malaise the likes of which we have not witnessed since the Great Recession in 2008 and 2009. Entire industries such as airlines and hotels are feeling the heat as demand plunges amid a slew of lockdowns and border closures enacted by governments around the world to contain the spread of the coronavirus. These trying times are enough to stress out any investor as job losses pile up and companies report plunging sales and profits.

It is precisely times like these that make us question what we think we know, as the world around us undergoes irreversible change. Many aspects of human behavior have been altered as the pandemic forces people to change their daily routines, habits, and practices. Working from home has become more widespread, and more people are ordering takeout or deliveries from restaurants rather than dining in.

Amid all this change, here are two stocks whose business models I believe will not be adversely affected. In fact, this pandemic can provide them with opportunities to grow stronger over the long term. 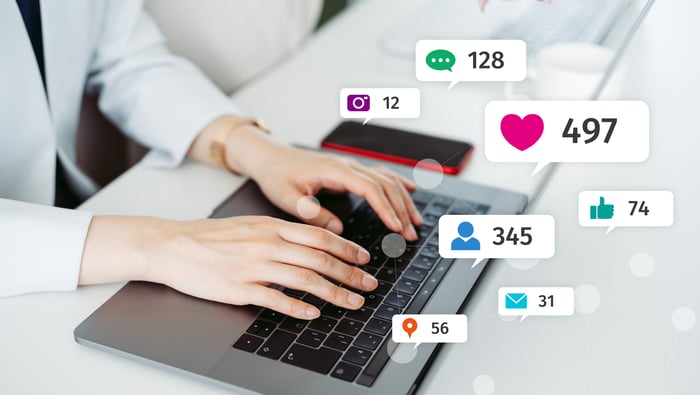 Facebook (META -3.99%) has grown into the largest and most prominent social media outlet over the last decade. Since Facebook was launched by then Harvard sophomore and now CEO Mark Zuckerberg back in 2004, its user base has grown exponentially, from just a thousand users back then to around 1.8 billion daily active users in the second quarter of 2020.

The company has been continually tweaking and upgrading its user interface and functionality, and advertisers love it for the specific consumer segments their ads can target. Facebook is undoubtedly the market leader in the social media space and also owns other brands such as Messenger, WhatsApp, and Instagram. As more users jump onto its platform, this also attracts greater numbers of advertisers in a virtuous network effect.

Growth in advertising revenue is still evident from the 10% year-over-year increase presented in Facebook's latest earnings report. With expenses and costs rising at just 4% year over year, this translated into a jump of 29% in operating profit for the social media giant. The pandemic has pushed even more people onto social media, accelerating growth in Facebook's user base like never before. If we account for this trend, as well as the fact that much of the world has yet to embrace social media as their countries modernize, Facebook's growth runway seems able to carry on for many more years, if not decades.

The company is not getting complacent, though. It recently launched Instagram Reels, hoping to garner an even larger audience and serve up some competition for TikTok, a popular short-form video app. With Instagram's existing large user base, it can offer more personalized content on Reels that will lead to a higher user retention rate.

Mastercard (MA -1.75%) is a leader in digital payments and has a total of almost 2.6 billion credit and debit cards in circulation worldwide. Although the pandemic had depressed the number of switched transactions and volume in the U.S. and worldwide during April and May, the numbers shown for the first three weeks of June have been encouraging. Switched volume is just 5% down year over year during the week ended June 21 and is up 5% year over year in the U.S.

The improvement in operating statistics points to a clear trend: the increased shift toward digital and contactless payments by many countries resulting from the pandemic. The world may be on the cusp of a multi-year growth trend in online payments as governments and businesses are forced to revamp antiquated ways of conducting transactions. The pandemic has had a short-term negative impact on Mastercard, but has also planted the seeds for its long-term prosperity.

The payments specialist has continued to forge partnerships and collaborations even as the pandemic endures. Last month, the company accelerated its crypto card partner program, allowing Wirex to become the first native cryptocurrency platform to be granted a Mastercard principal membership. This move allows it to directly issue payment cards, making it easier for consumers to hold and activate cryptocurrencies.

Before this, Mastercard had acquired Finicity for $825 million to strengthen its open banking capabilities by leveraging Finicity's real-time access to financial data. And in a more recent move, Mastercard and TransferWise announced an expanded partnership to enable the issuance of cards in any market around the world where Mastercard is accepted and TransferWise is licensed.

These moves should bear fruit for the company in due course and continue to power its growth for many more years.