Please ensure Javascript is enabled for purposes of website accessibility
Log In Help Join The Motley Fool
Free Article Join Over 1 Million Premium Members And Get More In-Depth Stock Guidance and Research
By Catherine Brock – Aug 26, 2020 at 8:16AM

Stock splits may mean more, or less, than you think.

You've seen the headlines: Both Apple (AAPL -5.70%) and Tesla (TSLA -6.88%) are splitting their stocks at the end of August. If you've taken a peek into how Apple and Tesla's share prices have risen since their respective stock split announcements, you might get the feeling that stock splits are a big deal. But that's not entirely accurate.

A stock split is the conversion of one stock share into multiple stock shares according to a set ratio. That ratio, called the split ratio, is commonly 2-for-1 or 3-for-1. In a 2-for-1 split, the company doubles the total number of shares outstanding, and shareholders end up with two shares for every one owned prior to the split. In turn, each individual share should be worth 50% less after the split. 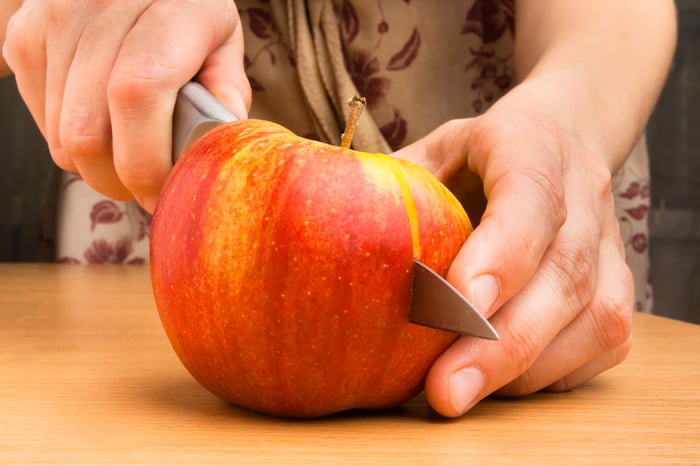 Apple will split its stock on a 4-for-1 basis. That means Apple's existing shareholders will receive three additional shares for every one they currently own. As well, the value of each share should drop by 75% -- because post-split, the total value of four shares should be roughly the same as the value of one share prior to the split. Since Apple is trading near $500 per share, the share price should drop to about $125 after the split. You'll see that change on Aug. 31, which is the date the stock will start trading on a split-adjusted basis.

Tesla will split its stock 5-for-1. The electric carmaker's stock trades above $2,000 per share currently. After the split, that hefty share price should drop to about $400. Tesla stock will also start trading with its revised share count on Aug. 31, 2020.

What stock splits mean for investors

Stock splits change the number of shares outstanding and the price per share, but they do not change a company's market capitalization or signal a change in the company's underlying fundamentals. Existing shareholders will see that they own more shares, but each share is worth proportionally less. The total value of an investor's position in that company doesn't change due to the split.

One thing that does change for existing shareholders is their per-share cost basis. If you decide to sell shares sometime after the split, you would have to adjust that cost basis proportionally to calculate your capital gains properly. Say you purchased 20 shares of Apple prior to the split for $8,000, which equates to a per-share cost of $400. The split then converts your 20 shares into 80 shares, and that reduces your per-share cost to $100.

Why companies split their stocks

If you're thinking all of that sounds like a paper transaction, you'd be right. And that leads into the next logical question: Why do companies split their stock at all?

Leadership teams implement stock splits to lower the company's share price. The thinking is that a lower share price makes the stock available to a wider range of investors. You may not have $2,000 to drop on a single share of Tesla, for example, but you might be swayed to invest if that share were priced at $400 instead. That more accessible price point should prop up demand for those shares, which in turn improves their liquidity.

That improved liquidity can make a stock more valuable in the eyes of investors, even when the company's ability to produce profits hasn't changed. That certainly appears to be the case with Apple and Tesla. Apple's stock has risen more than 25% since its split announcement, and Tesla's share price is up more than 45%. And that growth isn't just a function of general investor optimism; in the same time period, the S&P 500 has only risen about 4%.

The argument against stock splits

The dark side of higher demand and liquidity is volatility. Lower-priced shares tend to show more price volatility than their higher-priced counterparts. Back in the 1990s, legendary investor Warren Buffett cited increased volatility as one reason why he wouldn't split Class A shares of his holding company Berkshire Hathaway (BRK.A -1.25%). Buffett argued that volatility wasn't great for shareholders. He's stuck with that stance and, today, the stock trades in excess of $300,000 per share.

Stock splits increase the number of outstanding shares and reduce a stock's trading price. The lower share price can fuel demand and improve liquidity. But -- and this is what prevents a split from being a truly big deal -- the split does not distribute more wealth to shareholders or represent a change in the company's ability to create value.