Please ensure Javascript is enabled for purposes of website accessibility
Log In Help Join The Motley Fool
Free Article Join Over 1 Million Premium Members And Get More In-Depth Stock Guidance and Research
By Jim Halley - Aug 26, 2020 at 7:26AM

The biotech is clearly having a better year. Does that make it a better buy?

That said, while Regeneron's share price has risen, both companies still have good long-term fundamentals, and both have found ways to excel amid the coronavirus pandemic. 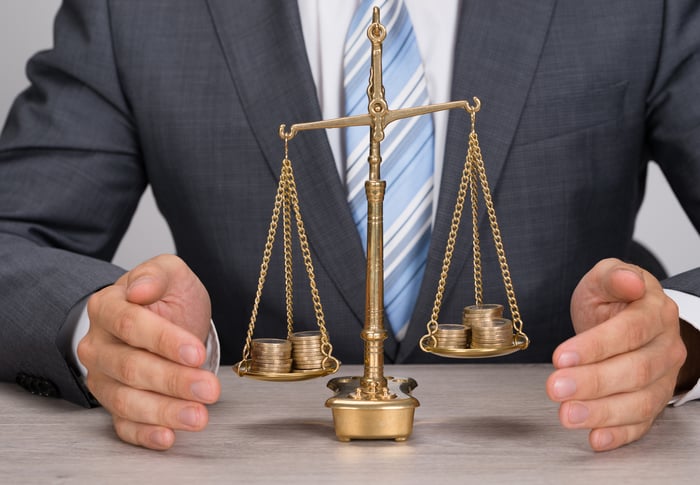 The question is: At $594 a share, is Regeneron still a better buy than CVS (which was just under $64 on Monday) and the better long-term purchase?

Starting with the basic numbers

Though they're both in the healthcare space, these are vastly different companies.

Regeneron, a biotech founded in 1988, practically screams growth, with seven drugs approved by the U.S. Food and Drug Administration (FDA) and a strong pipeline, including nine drugs currently in phase 3 trials. In the 10 years from 2009 to 2019, the biotech company's compound annual growth rate (CAGR) was 34.2%. That trend was evident in the most recent quarter, as reported Q2 revenue was $1.95 billion, up 24% year over year, and net income reached $897 million, a massive rise of 365% year over year.

CVS, founded in 1963, is seen as more solid, diversified, and stable, but it's definitely slower-growing, with a CAGR of 9.9% between 2009 and 2019. In the second quarter, the company reported $65.3 billion in revenue, up 3% year over year. Its net income was $2.9 billion, a rise of 54.6% year over year. CVS splits its business model among its retail, pharmaceutical, and healthcare benefits segments. Of the three, the pharmaceutical segment accounts for more than half of revenue, but healthcare benefits is easily the fastest-growing.

Annual revenue has increased for nine consecutive years and CVS is on track for a tenth, but its track record of net income growth is only three consecutive quarters. Regeneron has eight consecutive years of revenue growth, but it saw net income fall 13% last year before heating up again this year. Year to date, CVS's share price is down nearly 14%, while Regeneron's is up more than 58%. For comparison, the S&P 500 is up about 6.2%. 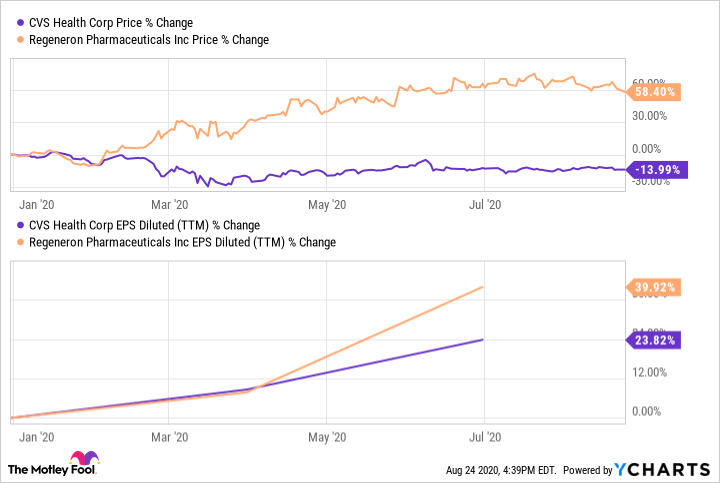 What's driving the interest in Regeneron?

One big factor in the rise in Regeneron's stock is REGN-COV2, a drug the company calls an "antibody cocktail" that it is developing along with Roche (RHHBY -2.50%) for the treatment and prevention of COVID-19.

On July 6, Regeneron began a Phase 3 study in preventing COVID-19 infection among subjects who have had close contact with someone who has the virus (such as a household member). The study is being done with help from the National Institute of Allergy and Infectious Diseases (NIAID). REGN-COV2 is also in two phase 2/3 clinical trials testing its ability to treat COVID-19 patients. If the drug is approved, it would be distributed in the U.S. by Regeneron and elsewhere by Roche.

A day after Regeneron announced that it was beginning its phase 3 study on REGN-COV2, the U.S. government's Biomedical Advanced Research and Development Authority (BARDA) awarded the company a $450 million contract to produce the drug, meaning that if it is approved, the company could begin producing it immediately -- as early as this fall.

It's not all about the pipeline here, either. Regeneron's current biggest seller is eye drug Eylea, which primarily treats wet age-related macular degeneration and pulled in $1.8 billion in the second quarter, down more than 6% year over year. It also has a strong performer in eczema drug Dupixent, which had $945 million in sales last year, an increase of 69.5%.

Regeneron may also be able to cash in on REGN-EB3, a potential Ebola treatment that is being reviewed by the FDA. If the drug is approved, Regeneron says it already has an order from BARDA for $10 million worth in 2021 and an average of $67 million per year for each of the next five years.

What are the advantages of CVS?

While it has been a rough year for CVS stock, that also presents an opportunity for investors -- the stock is cheap with a price-to-earnings (P/E) ratio of 10.1, versus 23 for Regeneron. (While P/E differs across sectors and industries, CVS and similar pharmacy and drug stocks average about 20, while biotechs like Regeneron often go higher, into the 30s.) And patient investors who are willing to buy and wait for CVS stock to rise get a decent quarterly dividend of $0.50 per share in the meantime, which works out to a yield of 3.14%, higher than the S&P 500's average of about 2%. Regeneron does not have a dividend.

CVS is a bigger company with a lot more diversity and liquidity. It had $257 billion in revenue last year versus $7.9 billion for Regeneron. As a mature company, it's unlikely to have the type of growth Regeneron is showing, but it is a safer investment.

One concern with Regeneron is that its stock has been driven up considerably by the potential of REGN-COV2, and it's true that if any problems develop with that drug, the stock price would certainly be affected in the short term. However, Regeneron has a lot more going on than REGN-COV2, and its stronger earnings per share, to me, make it a bet worth taking.