Please ensure Javascript is enabled for purposes of website accessibility
Log In Help Join The Motley Fool
Free Article Join Over 1 Million Premium Members And Get More In-Depth Stock Guidance and Research
By Bradley Freeman – Aug 26, 2020 at 11:16AM

Here's how to gauge the impact of a stock split on a company's value.

Over the past few weeks, high-profile companies such as Tesla (TSLA 0.03%) and Apple (AAPL -2.63%) have announced stock splits. A stock split is when a company decides to multiply its existing share count by a certain number. Each existing shareholder then receives additional shares for each share they currently hold. In a 3-for-1 split, you get three shares for every one share you previously held and so on. The price per share for these new shares is determined by dividing the price of the shares just before the split by the factor by which share counts were increased.

It seems that stock splits been trending lately, so it might be useful for investors to better understand the process and avoid some common misconceptions associated with the maneuver. Here are the three most important misperceptions to avoid. 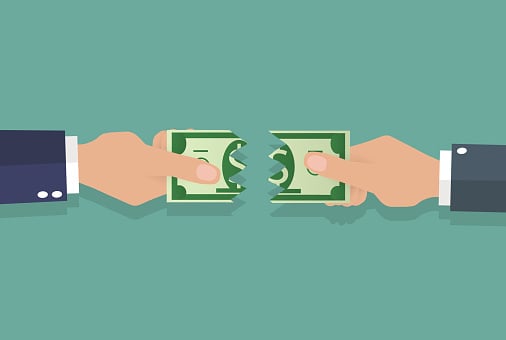 Let's take Tesla's recently announced 5-for-1 stock split as an example. If the company moves forward with its 5-for-1 stock split on Aug. 28 and you previously owned 10 shares, your share count would quintuple (increase by 5 times) to 50 shares post-split. Does this mean the value of your investment increased by a factor of 5 as well? No, the value did not change.

The split does not impact the asset or earnings value of the company. Instead, it merely impacts the number of shares outstanding. The result is your equity stake remaining unchanged due to the value of each share being diluted to perfectly offset the increase in shares outstanding. Regardless of this, stock message boards and social media accounts are inexplicably loud (and wrong) about the promising impacts of a stock split. You'd be wise to ignore this noise entirely, because stock splits have zero impact on a company's prospects.

Continuing with our Tesla case study, the split will certainly have a direct effect on price per share. If the stock traded hands at $2,100 per share at the time of the split, that price per share would be divided by 5 to $420. Understandably to some, this looks as though the company instantly became 5 times cheaper, but this is not the case.

One share of Tesla post-split controls just 20% of the earnings, assets, and voting rights that 1 share controlled before the split. This means you would need to purchase 5 shares of the company for a total of $2,100 to realize the exact same exposure the $2,100 share represented before the split.

When considering this, it becomes more and more clear how little impact a stock split actually has on a business. Why are companies doing it, then?

3. The potential reason for splits

Apple argued the decision to split its stock 4-for-1 was fostered by a desire to make its shares more affordable to retail investors. While that might have been historically true, with most brokerages now allowing users to buy fractional shares based on specific dollar amounts rather than shares in whole integers, there is now little merit to that argument.

I believe it has much more to do with new investors' desire to own 10 or 100 shares rather than a piece of one share. In reality, this has no bearing on the potential upside of an investment; it simply feels better to a typical investor, and understandably so. It seems stock splits are more psychological than anything else.

Furthermore, Apple's announced share split was met with incredibly bullish price action, regardless of the move being entirely irrelevant to the company's overall value and future prospects. Perhaps companies like Tesla noticed the boost this effortless move gave to Apple and decided to follow suit.

Apple and Tesla's stock splits thrust the topic back into mainstream discussions. In this light, It's important to understand the complete lack of effect these moves have on the actual value of an equity. Investors would be wise to avoid basing their investment decisions on a stock split. Simply put: Splits do not matter.