Please ensure Javascript is enabled for purposes of website accessibility
Log In Help Join The Motley Fool
Free Article Join Over 1 Million Premium Members And Get More In-Depth Stock Guidance and Research
By Daniel Foelber – Aug 26, 2020 at 11:17AM

One of the best industrial stocks on the market just got even better.

The over-120-year-old Dow Jones Industrial Average (DJIA) is getting a serious makeover that could mean profits for your portfolio.

Technology giant Salesforce.com is replacing ExxonMobil, Honeywell International (HON -2.07%) will replace Raytheon Technologies, and Amgen is replacing Pfizer in an effort to modernize the index after Apple's four-to-one stock split.

Shares of Honeywell jumped over 3% the day the news broke,  but there are several reasons why today's rise could be just the beginning. 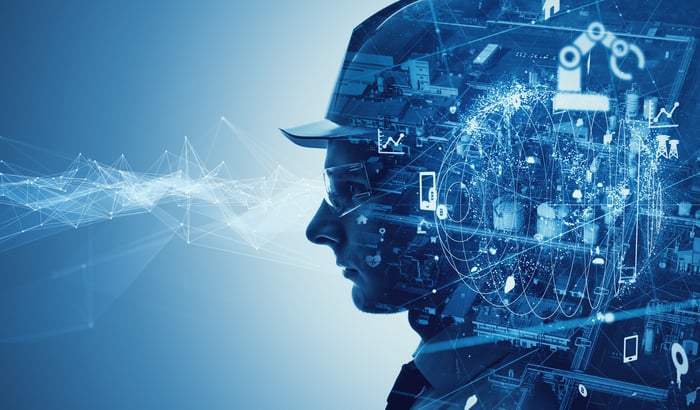 Apple's surge above $500 a share made it the largest component of the price-weighted Dow Jones index. But Apple has announced a four-to-one stock split, which will lower the price of its shares and quadruple the total number of shares outstanding. This doesn't change the actual value of Apple, but it does lower its effect on the DJIA. This is because the DJIA weights stocks on their somewhat arbitrary stock prices, unlike the capitalization-weighted S&P 500 index, which weights stocks based on their market capitalization. Since the market continues to value technology more and energy less, Salesforce's replacement of Exxon was meant to offset Apple's reduced influence.

A reflection of the American economy

According to a press release by S&P Global, the shakeup was meant to "help diversify the index by removing overlap between companies of similar scope and adding new types of businesses that better reflect the American economy," indicating that Honeywell is a better representation of the American economy than a defense and commercial aerospace company like Raytheon Technologies.

As the third-largestU.S. industrial by market capitalization, Honeywell's influence is staggering. In fact, there's a chance you use a Honeywell product every day in the form of a thermostat, fan, generator, alarm system, and more.

Honeywell components, products, and operational technology (OT) are instrumental in commercial and military aircraft, commercial buildings, the oil and gas industry, industrial manufacturing, and the healthcare industry. But there's reason to suggest Honeywell is embracing information technology (IT) as well.

There are many reasons why the Honeywell of today is looking like a technology/industrial hybrid. Honeywell's Fast Track Automation is a recent development that is a direct response to the COVID-19 pandemic. The technology can reduce the time between drug approval and commercial-scale manufacturing by automating the production process.

More generally, Honeywell Forge is the company's effort to leverage data across its swath of industries to better automate maintenance, make buildings smarter, increase airline efficiency, and implement industrial cybersecurity at scale. Honeywell Forge has the potential to act as the software coupling to all of Honeywell's physical products. Simply put, it's a data collection and management system that has the potential to make Honeywell's products across all of its industries even more efficient.

Aside from its industry-leading position in OT -- and its budding growth in the Industrial Internet of Things (IIoT) -- Honeywell's balance sheet is yet another reason why the company is now the best industrial stock in the Dow Jones Industrial Average.

Despite being the largest industrial by market cap in the DJIA, Honeywell has the least amount of net long-term debt, the lowest financial debt to equity, and the lowest debt to capital of all the industrials in the index. 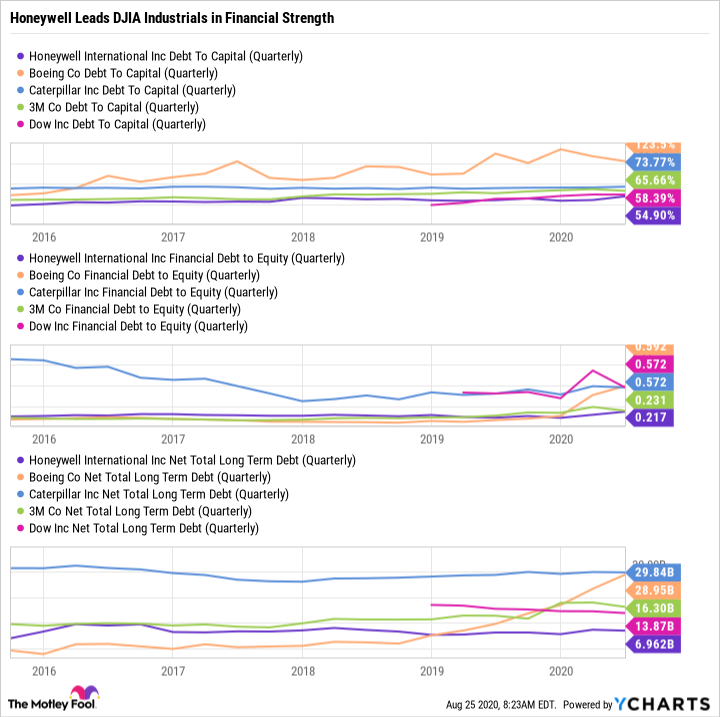 Given the strain of the COVID-19 pandemic on the industrial sector, Honeywell's financial strength is now more important than ever.

In addition to its strong balance sheet, Honeywell's management has implemented effective cost reductions. And despite a challenging second quarter, Honeywell's free cash flow (FCF) remains healthy enough to cover the company's dividend obligation on its own, meaning that Honeywell won't have to rely on debt to cover its dividend. Meanwhile, Boeing has suspended its dividend entirely and Caterpillar's second quarter FCF fell 50% year over year but was still enough to cover dividends. Even in the challenging environment, 3M and Dow Inc. are doing an impressive job growing FCF to levels that far exceed their dividend obligations.

Honeywell's dividend has tripled over the past 10 years and yields 2.3% at the time of this writing.

A great fit for the DJIA and your portfolio

Honeywell's addition to the DJIA is a testament to its increasing relevance in the modern economy. With shares still down 10% this year and an attractive dividend you can count on, Honeywell would make a great addition to any portfolio right now.