Coca-Cola (NYSE:KO) has long served investors well on the dividend front. The consumer staples stock has hiked its payout for 58 consecutive years and has paid 395 dividends since 1920.

One of the most famous Coca-Cola investors is Warren Buffett. The 400 million shares that Berkshire Hathaway purchased for about $1.3 billion generated $640 million in dividend income last year alone.

Few investors will profit from Coca-Cola in either percentage or absolute terms as much as Buffett. But should new investors buy Coca-Cola stock for the dividends?

Coca-Cola and its dividend

The company's dividend history is impressive by any measure. It easily exceeds the 25-year threshold of consecutive payout hikes needed to become a Dividend Aristocrat. Even better, few companies have built a streak of annual increases that exceeds Coca-Cola's track record.

Plus, it pays new investors quite well. The current annual dividend amounts to $1.64 per share. At current prices, this takes the dividend yield to just under 3.5%, nearly double the average dividend yield for the S&P 500 of just over 1.75%. Given this, it is easy to see why the payout continues to appeal to investors. 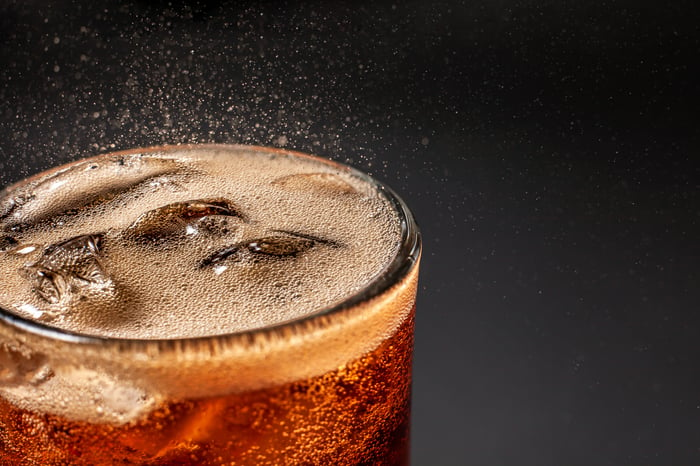 However, the company's dividend payout ratio, or the percentage of its net income paid out in dividends, has risen to more than 90%. Admittedly, profits have fallen amid the pandemic as consumers forgo restaurant meals and events where they would likely drink a Coke. Still, next year's earnings forecast of $2.06 per share would only reduce the payout ratio to the 80% range. This leaves little room for the company to invest profits in future growth.

Also, since the company sells its flagship Coca-Cola beverage in almost all of the world's countries, it must depend on other products and creative marketing to drive growth.

This may explain why Coca-Cola stock has risen by only about 70% over the last 10 years. This is less than impressive, considering that many S&P 500 stocks have exceeded that growth rate since the bear market lows of five months ago. 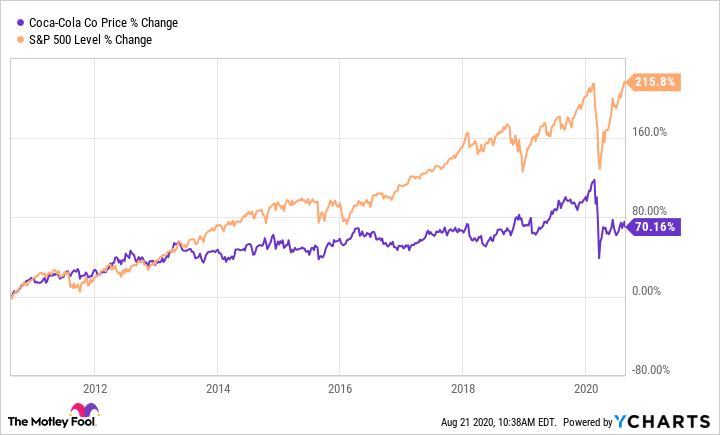 Is Coca-Cola a buy for the dividend?

Additionally, this dividend brings with it significant risk. Investors have no reason to expect the payout ratio will fall below 80% for the foreseeable future. For one, the company offered few specifics on earnings for the upcoming quarters. Additionally, analysts forecast a 13.7% decline in profit this year, followed by an increase of 13.2% in fiscal 2021. If this holds, profit levels in 2021 will come in below 2019 levels.

Even worse, the stock sells at a forward P/E ratio of almost 26. Since the five-year average forward multiple is just over 22, it has not moved far above its historic averages. However, that higher multiple, along with a lack of profit growth, decreases the likelihood of significant near-term upside.

The good news for dividend investors is that the streak will likely continue. Coca-Cola holds almost $17.6 billion in liquidity, and the company remains profitable. This should allow it to cover the annual dividend expense of just over $7 billion. Walking away from a 58-year dividend streak would also likely damage the stock for years. Since the company's board will probably choose to avoid that turmoil if possible, shareholders can expect a modest payout hike at the beginning of 2021.

But investors can find higher dividend yields in other stocks with long histories of increases. In many cases, other dividend stocks offer more modest earnings multiples and significantly lower dividend payout ratios.

And while someone like Buffett certainly has an incentive to hold due to the dividend income, even he has not bought additional shares of Coca-Cola stock since 1994. Coca-Cola remains a hold for long-term investors, prospective stockholders should probably look elsewhere for new sources of dividend income.