Please ensure Javascript is enabled for purposes of website accessibility
Log In Help Join The Motley Fool
Free Article Join Over 1 Million Premium Members And Get More In-Depth Stock Guidance and Research
By Zhiyuan Sun – Aug 26, 2020 at 6:09AM

If you won't need that $1,200 to pay your immediate bills, why not use it to bolster your long-term financial plan?

There is currently bipartisan support in the U.S. within both the House and Senate for some form of coronavirus relief package, including a second round of stimulus checks expected to be worth $1,200 for most adults. But the Republican and Democratic legislators are far, far apart when it comes to what else should be in that potential economic stimulus package, and the White House adds a third position that differs from them both. The Senate went into recess Aug. 13 and left Washington, D.C., with no sign of a pending agreement.

Still, a deal to send that cash out to Americans may be closer than you think -- the congressional recess ends in early September.

For tens of millions of Americans, a second stimulus check -- assuming a deal happens -- would allow them to catch up on back rent, get current on car payments, and generally mitigate some of the pandemic's impacts on their lives.

But there are still many households that have not taken a direct financial hit from COVID-19, and for those who were on track and remain so, a stimulus check will more or less amount to spare cash -- extra discretionary income. And even with the stock market now setting fresh record highs, it's not a bad idea to invest your spare money for the long term now, and wait to harvest the fruits of compound growth later. Here are three terrific stocks that investors should consider adding to their portfolios. 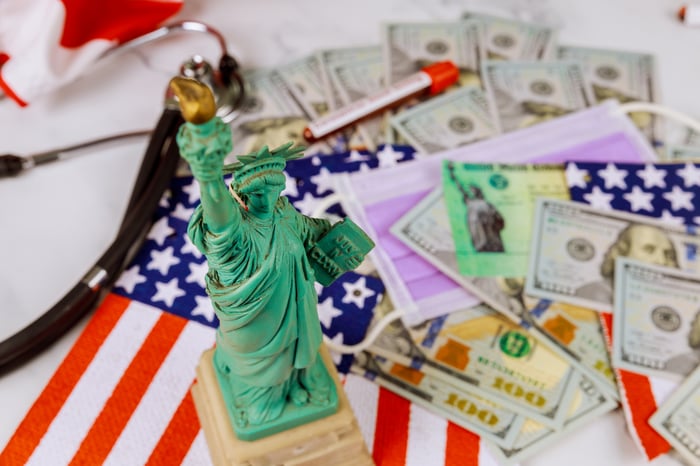 Sea Limited (SE -3.98%) is a tech holding company whose businesses consist of online gaming platform Garena, e-commerce giant Shopee, and digital payment solution SeaMoney. The COVID-19 pandemic has acted as a catalyst to speed up the world's shift toward a more digital economy, and that has considerably improved the company's financials.

In the second quarter, Sea Limited's revenue grew by a stunning 93% year over year to $1.3 billion. Meanwhile, its gross profits more than doubled to $200.8 million.

Driving much of this growth was Garena: More than 500 million users around the world played at least one of its games during the quarter, up 61% year over year. Shopee continues to play a leading role in Southeast Asia's e-commerce market, with gross orders up by 150% to $615.9 million in Q2. And the adoption of SeaMoney in financial services continues to increase. The digital payment provider now has 15 million users and processed $1.6 billion in total payments during the quarter.

In short, Sea Limited is firing on all cylinders and shows no sign of decelerating. Since the beginning of the year, its stock has gained nearly 300%. The company also has $3 billion in cash and investments that it can deploy for further expansion.

Guardant Health (GH -2.64%) is rapidly gaining traction in the cancer diagnosis business. The healthcare company's edge lies in its liquid biopsy tests, which can detect cancers by registering the presence of broken-off cancer cells in patients' blood samples. In contrast, a solid biopsy requires doctors to take a sample of the patient's tumor tissue, which can be a complicated procedure for certain types of malignant growths in the brain or lungs, among other organs.

After state and local governments began relaxing their lockdown and shelter-in-place measures, more patients regained confidence about the safety of visiting their physicians, and demand for Guardant's testing largely returned to pre-pandemic levels. Going forward, investors should expect the company's sales growth to return to normal levels, such as during the first quarter of 2020, during which the company's annual revenue growth was more than 80%.

What's more, in mid-June, the company rolled out its GuardantINFORM genome platform, which harnesses genetic data along with clinical information from patients. Using this, it can deduce multiple important things about a patient's tumor, such as its mutation profile and possible resistance to certain drugs.

With $1.1 billion in cash and investments on the books and no debt whatsoever, the company is in an ideal position to expand its market share even further. Year to date, Guardant Health stock is up by nearly 20%.

Its profits went up as well, as gross margin increased by 3 percentage points to 44% as of June 30. Moreover, Advanced Micro Devices' net income nearly tripled year over year to $173 million during the quarter. For fiscal 2020, the company expects its revenue to increase by 32% over last year's $6.73 billion.

The company is also in a superb financial position, with cash and cash equivalents amounting to $1.78 billion, compared with long-term debt of just $690 million. Since January, shares of AMD have rallied by more than 80%, and should maintain their momentum as high demand for processors continues.