Please ensure Javascript is enabled for purposes of website accessibility
Log In Help Join The Motley Fool
Free Article Join Over 1 Million Premium Members And Get More In-Depth Stock Guidance and Research
By Robert Izquierdo – Aug 27, 2020 at 9:32AM

The telecom giant has lost billions this year. Learn why it's still a worthwhile investment.

AT&T (T -2.12%) has historically served as a stable investment, but those days are now at risk. Once the coronavirus pandemic struck, AT&T's revenue plunged.

Combine a pandemic with some concerning company performance metrics, and AT&T starts to look like a questionable investment. But that's not all. AT&T faces an increased threat from rival T-Mobile, which strengthened its position in the competitive U.S. market through a merger with Sprint this year.

Even after AT&T weathers the pandemic's impact, the company's challenges mean it has an uphill battle ahead. Does it make sense to invest in this telecom icon? 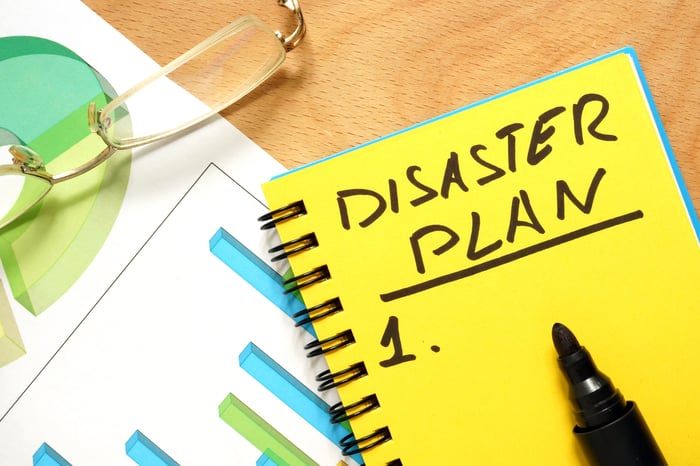 Let's unpack AT&T's challenges today. Even before the pandemic, critics were concerned with the company's massive debt load, totaling $152 billion at the end of the second quarter. AT&T took on this debt to acquire DIRECTV and Time Warner in an effort to build a media empire. Paying this debt down has been more difficult because of the pandemic and the ensuing revenue decline.

AT&T's media division, WarnerMedia, was particularly hard hit by the pandemic, causing the company's earnings to suffer. WarnerMedia witnessed its revenue drop a whopping $2 billion year-over-year in the second quarter. The division's business model depends on television advertising and box office receipts, which both dried up when the pandemic caused the shutdown of sporting events and theaters.

These metrics are grim, but more concerning were the results for the company's telecom business, its one dependable revenue source. Second-quarter results revealed AT&T is steadily losing wireless customers over time.

AT&T's troubling Q2 results combined with its debt load form a murky future. But many factors point to opportunities for the storied telecom titan.

The company completed a nationwide rollout of its faster 5G network in July. The 5G benefits extend beyond improved internet speeds and include the ability for more devices to connect online while reducing lag time. AT&T can capture greater revenue through 5G-enabled device sales and premium pricing for 5G subscriptions.

AT&T also launched its new streaming service, HBO Max, at the end of May. The service provides AT&T with several advantages:

HBO Max is tracking toward company targets for subscribers, activations, and revenue. It had over 36 million subscribers at the end of the second quarter.

AT&T's bundling of HBO Max and higher-priced wireless plans is working. According to Stankey, "We're giving customers a reason to go up in the more robust unlimited plans, and we're already seeing that penetration increase."

The company has the pieces to retain its fair share of the competitive U.S. telecom market. Investors can enjoy income from the company's high-yield (currently at 6.94%) dividend as they wait to see AT&T's plans return the company to its pre-pandemic trajectory, such as 2019's record cash from operations and free cash flow of $48.7 billion and $29 billion, respectively. These factors create the silver lining in AT&T's challenging year, bolstering the case that the stock is a buy.