Two giants of the technology hardware world, Micron Technology (NASDAQ:MU) and Intel (NASDAQ:INTC), find themselves out of favor with investors today, with each tech stalwart currently trading at a bargain-basement valuation.

This may seem counterintuitive, as the technology sector is booming right now. And with the advent of artificial intelligence, cloud computing, 5G, and the Internet of Things, it seems unlikely that these large semiconductor companies, both of which play into these big trends, could be such bargains today.

For contrarian value investors looking for cheap stocks in an otherwise frothy market, both companies should be at the top of your watchlist. But to discern which is the better buy, investors need to understand the reasons for their recent declines, and whether a turnaround may be in fact be in the cards. 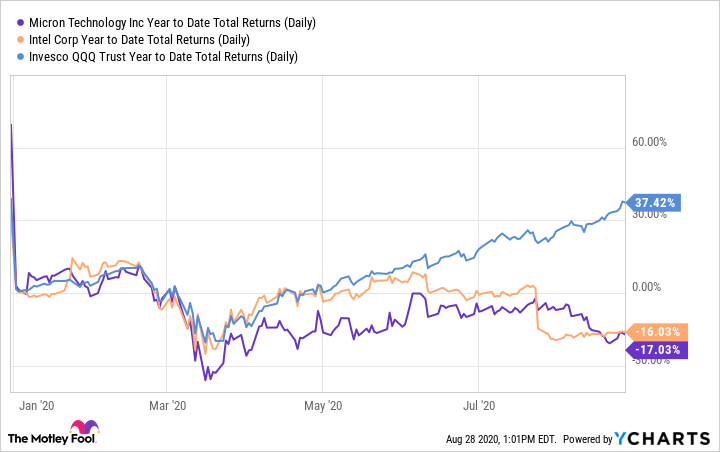 Intel and Micron have each traded lower for different reasons this year. For Micron, it is by and large a "price-taker" for its DRAM memory and NAND flash storage products, which are commodity-like components found in all electronic devices. Thus, no matter how much demand there is, if the major memory producers all over-produce, prices can crash and Micron's earnings can be hurt.

Micron has actually been in a downturn ever since the U.S.-China trade war broke out in mid-2018. That oversupply looked like it was turning around to a more balanced market earlier in 2019, when COVID-19 hit. While Micron then experienced a demand surge in the first half of the year, management has recently noted that its November quarter could come in a bit lighter than expected, as customers digest their big first-half purchases.

Thus, Micron's up-cycle looks to have been delayed for a couple of quarters as investors grapple with the prospect of another fall in memory prices. 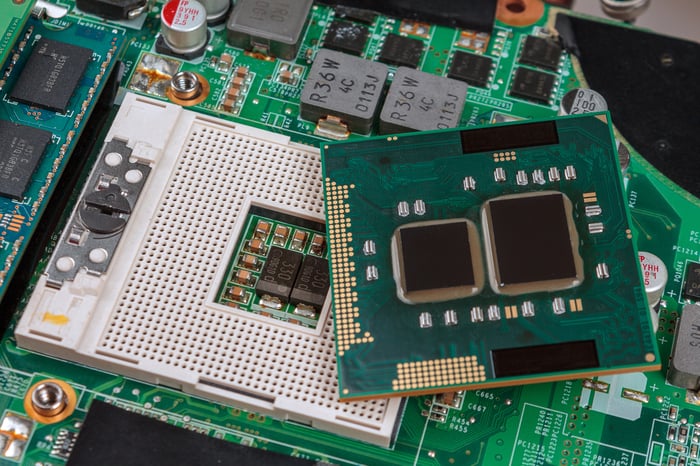 Though Intel's processor sales are somewhat sensitive to the same elements as Micron's memory chips, Intel's processors contain more proprietary chip design, and thus are not as vulnerable to severe average selling price swings. That has traditionally made Intel's earnings much more stable, enabling Intel to pay out a dividend that now yields 2.7%.

Like Micron, Intel had a strong first half of the year, but it also guided to some incremental weakness in the second half as buyers digest big first-half chip purchases.

However, the reason for Intel's 20%-plus drop during July wasn't merely the weaker second-half guidance but rather the announcement that its upcoming 7nm chip would be delayed by about 12 months relative to the company's initial target. Intel now envisions its first 7nm chip production shipments by late 2022 or early 2023.

Intel had already surrendered the leading-edge in CPUs to Advanced Micro Devices (NASDAQ:AMD) in late 2018, when it and manufacturing partner Taiwan Semiconductor Manufacturing (NYSE:TSM) were able to get ahead of Intel, which has its own internal manufacturing fabs, in the race to its 7nm chip (equivalent to Intel's 10nm). Now, it looks as if AMD/TSM's lead over Intel will be widening in the next couple of years. Taiwan Semi already expects to be producing 5nm chips (equivalent to Intel's 7nm) before the end of this year, two years ahead of Intel's new schedule.

Both are trading at bargain-basement valuations

As both Intel and Micron have lagged the overall market and tech sector this year, it isn't because they were expensive heading in. In fact, both companies are trading at extremely low valuations. 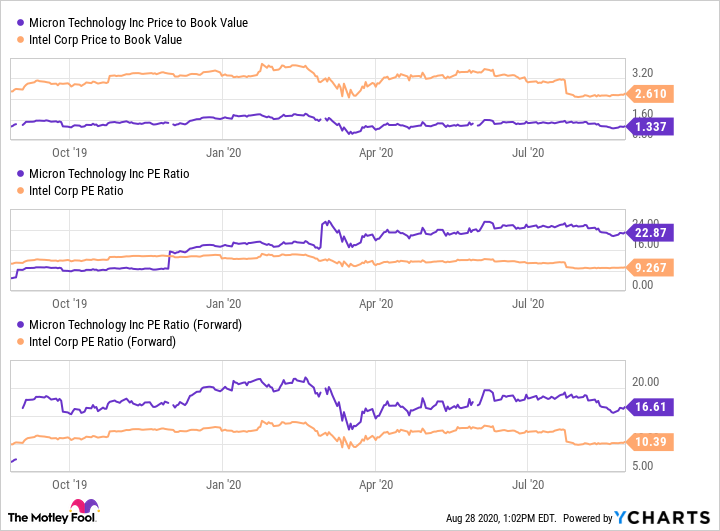 The trick between picking value stock opportunities and avoiding value traps is to figure out if a business is in a cyclical (short-term) or secular (long-term) decline. For Intel, I'm just not sure if it can pivot quickly enough to catch up to AMD over the next few years. If not, Intel could lose a lot of market share not only in PCs but also in the all-important data center, where Intel currently has a massive 90%-plus market share. Thus, if AMD can maintain its lead, Intel could see that share of the data center processor market plunge, and its revenue and profits along with it.

On the other hand, I expect Micron's current minimal earnings to improve over the next few years. In reaction to the second-half air-pocket in demand, it was recently reported that the large DRAM manufacturers are all pulling back on capital expenditures in 2020 -- the second year in a row that's happened.

As suppliers pull back on new production and demand rebounds due to DRAM-heavy 5G phones, AI servers, and increased industrial and automotive chip content, I expect 2021 to be a better year for Micron than it will be for Intel, as the latter struggles to regain its footing against AMD. Since Micron is dealing with a cyclical problem and Intel could be dealing with a secular one, Micron seems like the better bounce-back candidate to me right now.