Is the tech giant a buy now that its shares have split 4-to-1 and its share price is just 25% of what it was before?

The tech titan's shares began trading at their new split-adjusted price Monday. Following its 4-for-1 stock split, Apple's shares are now trading for roughly 75% less than they were before.

But does that mean the stock is a buy? 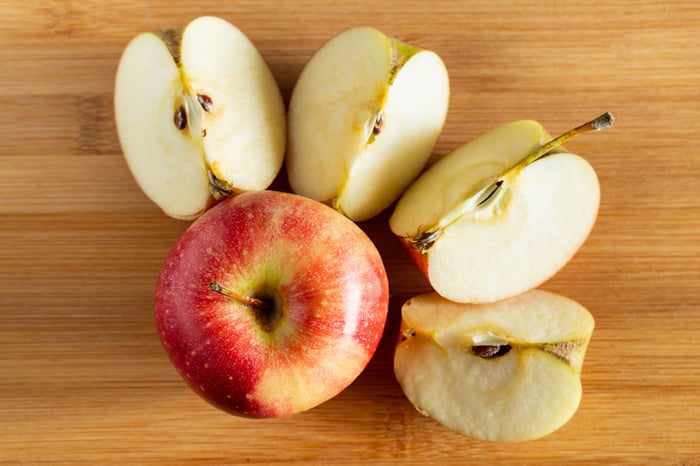 Apple split each of its shares into four. Image source: Getty Images.

First of all, investors need to understand that a stock split does not change the fundamental value of a business. Stock splits simply divide up a company into more pieces, with the value of each piece reduced in kind. In Apple's case, investors received three new shares for each share they owned. Those four shares are now worth one-quarter of the original share's price. So, if you owned one share of Apple worth roughly $500 on Friday, today you own four shares worth approximately $125.

Here's another way to think about it: A 4-for-1 stock split is like exchanging a $1 bill for four quarters. You still have the same amount of money, it's just divided into more portions.

But if a stock split doesn't change the value of a company, why has Apple's stock price run up so much ahead of its split and continues to rise after the split?

It's a fair question, and one with multiple answers. One reason is that less-experienced investors might not understand exactly how stock splits work and are simply excited about the chance to own more shares of Apple. Another reason is that investors who could not afford to buy a share at $500 may now be able to buy one at $125. (Though this is less of a factor today, now that many brokers allow their customers to buy fractional shares.)

Perhaps the best explanation is that professional traders know that many people do get excited about splits, and so they buy the stock ahead of what they expect will be a herd of individual investors rushing in to buy shares after the split is announced.

However, none of this alters Apple's long-term value, and so the effects can be fleeting. Said differently, it's possible that Apple's stock could surrender some of its recent gains now that the split has occurred.

So, is Apple's stock a buy today?

To answer this question, investors should shift their focus from the stock split to the true drivers of Apple's long-term value. And nothing is more important for Apple in this regard than the iPhone.

Fortunately, the company appears to be gearing up for a 5G-driven sales bonanza for the newest version of its prized product. The fifth-generation wireless technology could help to spur hundreds of millions of device sales in the coming year, driving Apple's sales and profits sharply higher.

Profits are what ultimately determines a company's -- and, by extension, a stock's -- true value. And in this regard, Apple's future is bright. Its stock, in turn, remains a buy post-split.