Please ensure Javascript is enabled for purposes of website accessibility
Log In Help Join The Motley Fool
Free Article Join Over 1 Million Premium Members And Get More In-Depth Stock Guidance and Research
By David Butler – Sep 1, 2020 at 8:04AM

In a frosty year for restaurant chains, one fast-food burger joint has fared better.

I may or may not have a personal bias for Wendy's (WEN -0.37%) Baconator, but that holds no sway here. The reason I like Wendy's over McDonald's (MCD -1.56%) is for the momentum the former was gaining prior to the COVID-19 pandemic. Both companies have struggled to find consistent top-line growth over the last five years, but Wendy's was on to something last year. And, with a new push into breakfast, it has more potential for growth.

Through the first six months of the year, Wendy's has maintained a far more stable revenue stream. Total revenue was down 4.3% to $807.3 million, compared with McDonald's decrease of 19% to $8.48 billion in that same time frame.

Operating income during that time also favored Wendy's, which saw operating profits fall 25.5% to $109.4 million, compared with McDonald's decline of 39% to $2.65 billion. 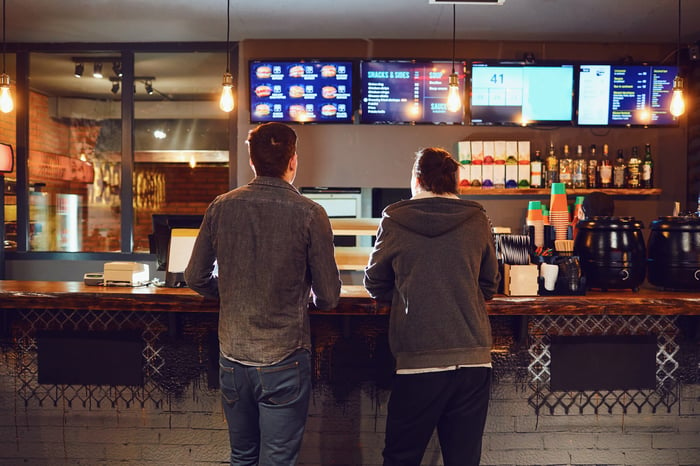 Gotta go with the underdog

It can be pretty contrarian to favor a different fast-food company over McDonald's, but right now I like Wendy's more. The main reason is that Wendy's has a new growth avenue through the introduction of breakfast. This new area became one of the prime strengths for the company this year. Launched back in March, the breakfast menu took off, generating 8% of Wendy's' sales by August.

McDonald's has struggled to find a new gambit. It has everything on its menu. In fact, it streamlined its menu a few years back, because it was overextended. Rising competition in the crucial breakfast business is going to increasingly pressure McDonald's. Breakfast hasn't been as strong for the fast-food giant of late, and the company has already faced weaker revenue potential thanks to its reversion back to a higher-franchised store model.

McDonald's began re-franchising years ago as an attempt to unlock more earnings value for shareholders. However, in doing so, it cannibalized its share of potential sales. Revenue has stagnated for the last five years. Despite a strong comp sales story of 5.9% growth to finish off 2019, McDonald's total revenue remained basically unchanged, demonstrating the impact that fewer company-operated stores can have on top-line growth.

While Wendy's sales have been tumultuous during those same five years, the restaurant chain seems to have found momentum since 2017, with revenue growing nearly 30% in 2018, and 7.5% in 2019. Having done a demonstrably better job handling the effects of COVID-19, Wendy's seems like the more appealing candidate to own. It doesn't have the longer-term track record of McDonald's, but it does have a more interesting setup right now. Its burgeoning breakfast segment, steadier sales, and smaller size make it a more appealing play for growth.