Please ensure Javascript is enabled for purposes of website accessibility
Log In Help Join The Motley Fool
Free Article Join Over 1 Million Premium Members And Get More In-Depth Stock Guidance and Research
By Pearl Wang – Sep 2, 2020 at 9:42AM

The specialty retailer's fiscal second-quarter earnings recovery was encouraging, but how will the company keep up the momentum?

Urban Outfitters, Inc. (URBN 2.75%) beat consensus projections on both the top and bottom lines during its fiscal second-quarter earnings report. While net sales decreased 16.5% year over year, and comparable retail segment sales fell 13%, its digital business was strong and "all brands were profitable," helped by smart inventory management.

Here are three takeaways from the quarter. 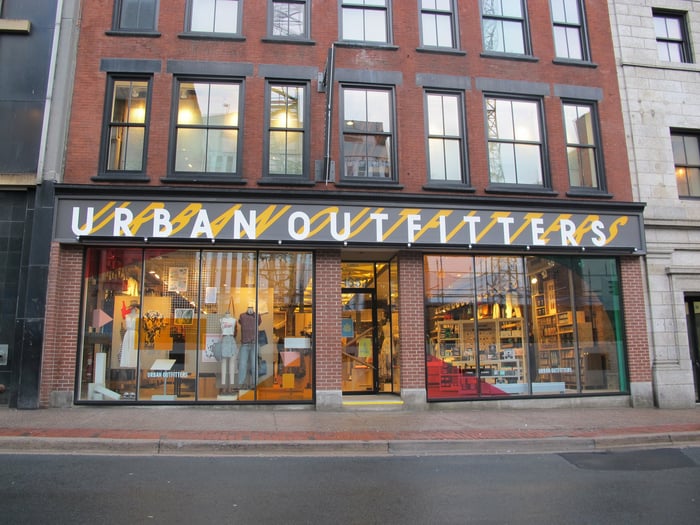 Free People was a bright spot

The Free People segment saw impressive 11% comparable-sales growth during the quarter. Store closures and weaker foot traffic did hurt retail sales at the brand, but digital strength led to positive retail comps. Impressively, the digital business saw "triple-digit gains of new customers to the brand," and Free People had record low markdowns in the quarter.

Sheila Harrington, President of the Free People division, spoke of the brand's strength on the latest earnings call: "The brand's positive results reflect the strength of the product offering, merchandising and creative marketing, coupled with disciplined inventory and expense control."

Free People's activewear line FP Movement was especially successful, growing faster than the overall brand in the second quarter. The line's revenue expanded in both performance and non-performance as people favored athleisure and comfortable clothing for spending more time at home.

The consumer discretionary company will continue to invest in FP Movement. Harrington noted, "In the second quarter, our marketing teams continued to increase our investment in Movement with strategic digital and creative brand prospecting tactics, including the FP Movement ambassador program." Urban Outfitters also plans to open two stand-alone FP Movement stores in Colorado and California later in 2020 with several more planned for next year.

Digital sales were strong across brands

While in-store revenue was lower due to COVID-related store closures, the improved demand from digital helped offset much of this headwind. Urban Outfitters' total digital business had double-digit comparable sales growth during each month of the second quarter. This strength has continued into the first three weeks of August.

Management is confident that the digital channel will continue to be strong going into the second half of the year, citing an increase in new digital customers (across all brands) of 76% year over year.

CEO Richard Hayne commented that Urban Outfitters is preparing its digital business to handle projected higher holiday demand: "These include adding staff in our existing fulfillment centers earlier, installing additional equipment in those centers to boost efficiency, using the Nuuly distribution facility to shop faster on items, and staffing stores to allow for more pack and ship processing."

Financials are stable despite the volatility

Even during a period that tested most retailers, Urban Outfitters has maintained a strong balance sheet thanks to its inventory management and "disciplined expense control."

Operating margin actually expanded half a percentage point to 8.6% during the fiscal second quarter, and the company ended the period with over $670 million in cash and equivalents, even after repaying $100 million of debt. The company's remaining debt balance is just $120 million, meaning the retailer was able to emerge from the pandemic's worst months without having stretched itself too thin.

While Urban Outfitters sees the uncertainty from COVID-19 abating, there will continue to be risks for in-store traffic and sales. Even in regions where stores have reopened, many locations must follow strict capacity guidelines, limiting the number of shoppers in stores.

There will also be macroeconomic headwinds as consumer spending and unemployment levels have yet to recover to pre-pandemic levels. Those challenges can take a toll on the entire retail sector if they do not begin to show signs of recovery during the holiday shopping season.

However, Urban Outfitters is factoring in this uncertainty, keeping inventories lean and adjusting products to cater to updated consumer preferences, such as more casual clothing for working from home. It's also continuing to invest in infrastructure to support growth in its digital sales, including the construction of several fulfillment facilities.

Overall, Urban Outfitters navigated volatility in its fiscal second quarter quite well, and the company is positioned to outperform many of its apparel-based peers in this environment.