Please ensure Javascript is enabled for purposes of website accessibility
Log In Help Join The Motley Fool
Free Article Join Over 1 Million Premium Members And Get More In-Depth Stock Guidance and Research
By Zhiyuan Sun – Sep 2, 2020 at 5:30AM

Buying cannabis companies on the cheap can be rewarding, but it's not for the faint of heart.

Since the beginning of the year, a prevalent illicit market, oversupply, and poor inventory management have ravaged Canadian cannabis companies. The benchmark Horizons Marijuana Life Sciences ETF (TSX: HMMJ) reflects these woes, down by nearly 25% from Jan. 2 to Aug. 31.  As stocks in the sector continue to slide, many investors are wondering if now is the time to buy the dip.

But buying stocks as they bottom out is not always a profitable tactic. Investors may be catching a falling knife that never rebounds. Let's dig deeper into one slipping stock, Canadian cannabis company Organigram Holdings (OGI -1.85%), and ask whether investors should act now and buy its shares for cheap. 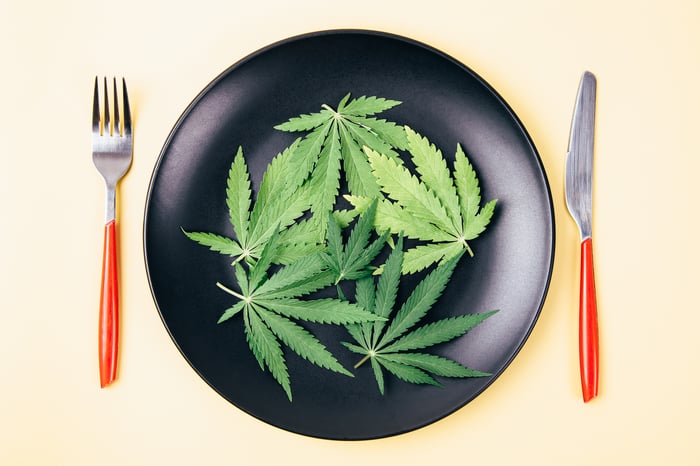 In the third quarter of 2020, Organigram's revenue decreased by 27% year over year to $18 million Canadian dollars due to severe oversupply issues. The company had to write down much of its inventory because it could not get its products in front of buyers, resulting in a cost of goods sold over twice as high as net revenues.

That's not all -- the market price of the company's cannabis dropped dramatically during the quarter. The fair value of Organigram's inventory took a CA$23.86 million hit. After all adjustments, the company's gross margin came in at a loss of CA$50.2 million, miles above CA$179,000 of gross losses in Q3 2019. This all translates to a stinging loss of $3 for every $1 it earned in revenue.

Another area of poor performance was Organigram's sales, marketing, general, and administrative expenses, increasing by 13% from last year to $10.2 million. Total net losses amounted to nearly CA$90 million, up from CA$10.18 million in net losses in Q3 2019, meaning that net losses increased by over 750% in a single year.

Like many cannabis companies, when Organigram runs out of cash, it turns to investors to make up for operational pitfalls. From May 2019 to July 2020, Organigram's shares outstanding went from 158.4 million to 204.6 million, an increase of 29%. The company's long-term debt simultaneously increased 71% from CA$46.1 million to CA$78.9 million.

In the Foolish investment world, we don't solely rely on past financials to predict a company's future. However, Organigram has had significant issues in its underlying business that warrant attention and will affect its ability to generate cash down the road.

In first quarter of 2020, Organigram expected its Moncton facility in the province of New Brunswick to achieve an annual production capacity of 113,000 kg of dried cannabis. At the company's average selling price of CA$4.59 per gram of cannabis, that would have meant CA$518.7 million in extra revenue.

Unfortunately, the Moncton facility experienced several delays towards the end of 2019, before halting development in November. A few months later, Organigram decided to suspend the final stages of construction indefinitely, citing a lack of product demand that rendered further construction in 2020 unnecessary. Since parts of the facility were completed with no foreseeable use, Organigram recognized a whopping asset impairment charge of CA$37.3 million in the third quarter of 2020.

As a result, the company expects to harvest only 42,000 kg per year from the Moncton facility. The plan to construct the facility was a colossal miscalculation of market dynamics. Additionally, lockdowns and quarantine measures in Canada that forced many retail cannabis stores to close in Q2 2020 have not helped the company's projections.

It's unlikely that the fix to Organigram's problem is to produce more cannabis products. Organigram still has up to $100.6 million worth of biological assets and inventory on its balance sheet. Given current trends, investors should expect writedowns going forward. The company is also attempting to trim costs elsewhere, cutting 25% of the company's workforce in June as part of restructuring efforts. 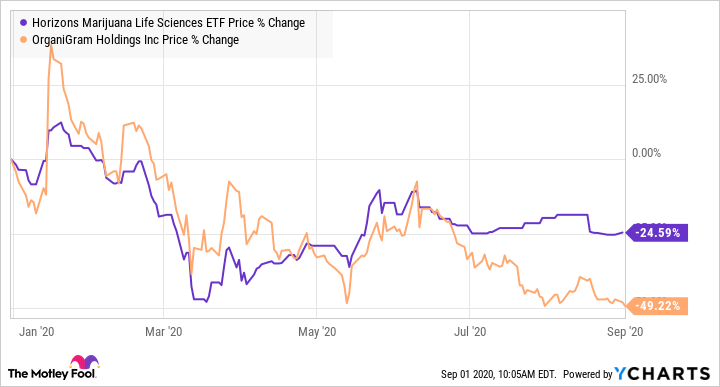 One advantage Organigram has over larger competitors is its valuation. Currently, the company's market cap stands at CA$328.7 million, giving it a price-to-sales multiple of four and price-to-book ratio of one.

It would be unfair to assume the company's valuation would only get cheaper from here on out. The company recently secured a deal with Israeli medical cannabis company Canndoc to supply the organization with up to 6,000 kg of dried cannabis by the end of 2021. The deal will provide some revenue for Organigram in the short term.

Investors have realized that Organigram is in deep trouble due to oversupply, lackluster performance, and cost-heavy financials. However, the stock is cheap enough that I believe most of these concerns are priced in. For those with a high-risk, high-reward mindset, now is not a bad time to go bargain hunting in Organigram stock. For everyone else looking to buy and hold for the long term, I think it's best to stay away from this marijuana stock for good.