Get 'em while they're cheap!

Stocks that are trading below $5 can be much more liquid than those that are higher-priced. That's just one reason why Apple and Tesla recently chose to initiate stock splits among a long list of perks, including that lowering share price increases investor demand for shares. In the cannabis industry, however, a soaring share price isn't a problem for most companies. The Horizons Marijuana Life Sciences ETF's (OTC:HMLSF) crash of more than 20% this year suggests there are some dirt-cheap buys to be found.

Low-priced stocks with modest valuations can quickly rise in value upon good news or a strong earnings report, and that's what makes a few struggling stocks tempting buys right now. Valens (VLNS) and Charlotte's Web (CWBHF 3.82%) are trading below $5 a share and could be due for some strong performances later this year. Let's take a look at why their share prices could take off before the end of 2020.

Valens is currently trading under $2 per share, but don't be fooled. This is a stock with plenty of potential. The British Columbia-based business is one of the largest extraction companies in Canada. Its edibles and derivative products only hit shelves upon their legalization under "Cannabis 2.0" in October, so their market segment is still in the early growth stages. Early edibles market estimates showed that the segment could be worth 2.7 billion Canadian dollars post-legalization. That's more than half the CA$5 billion that some analysts estimated the entire cannabis industry in Canada would be worth by 2021. 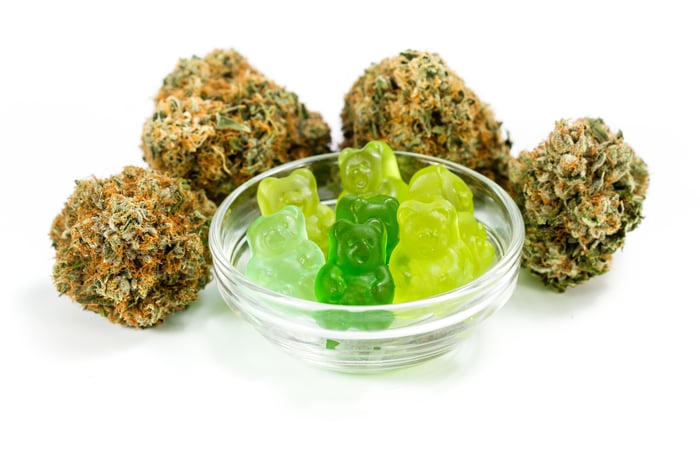 On July 15, the extraction company released its second-quarter results for the period ending May 31. Revenue of CA$17.6 million was double what the company generated in the prior-year period. However, that was a sharp drop from the CA$32 million that Valens reported in the first quarter. The company blamed the dip on a reduction of biomass shipments from extraction partners due to COVID-19. But Canadian marijuana sales are rising amid the pandemic. Between February and June, there was a 33% net increase in cannabis spending across the country. The trend suggests there could soon be a surge in shipments as the company works to meet demand with adequate supply.

Another great reason to invest in the Valens is that it's not knee-deep in losses. The company's adjusted earnings before income, taxes, depreciation, and amortization (EBITDA) this past quarter was a positive CA$2.7 million. And year-to-date, that figure climbs to CA$17 million.

Valens is a cheap buy right now, trading at just three times sales. A strong quarter later this year could double it in a hurry.

Charlotte's Web stock is currently trading a bit higher than Valens, at about $3.4. The Colorado-based company is a safer cannabis investment than other pot stocks because of its focus in the hemp market. Although hemp is federally legal in the U.S. and Charlotte's Web products can cross most state borders -- hemp still isn't legal in every state. Hemp products can contain no more than 0.3% of tetrahydrocannabinol (THC), a psychoactive agent. The federal government considers any substance containing greater than that percentage of THC, marijuana, and thus, federally illegal.

The legality of its hemp products is a great advantage for Charlotte's Web, which does a lot of business through its direct-to-consumer (DTC) segment. The company last reported its results on May 14, when it released its first-quarter performance for the period ending March 31. Charlotte's Web's online DTC sales made up 65.6% of its sales during the period -- up from 50.2% in the same quarter last year. Unfortunately, that wasn't enough to deliver any top-line growth, as sales of $21.5 million were slightly down from a year ago when the company reported $21.7 million in revenue.

However, with consumers staying home during the COVID-19 pandemic, Charlotte's Web could be due for a stronger quarter. The company doesn't release its second-quarter results, which would cover the period of April through to June, until next month. It'll be the first glimpse investors get as to how the company has performed during shutdowns, when demand for online shopping and delivery would have been at their highest yet.

If strong e-commerce demand continues, that could also help improve the company's bottom line. Charlotte's Web could experience economies of scale -- cost advantages gained from an uptick in operations. In Q1, Charlotte's Web incurred $16 million in general and administrative costs, which totaled more than its gross profit of $15.1 million. Getting those costs down will be critical to improving its bottom line.

Charlotte's Web's posted a loss for three straight quarters. The last time it was in the black was in Q2 2019, when it reported a profit of $2.2 million on sales of $25 million. A repeat profitability performance this year could get investors to turn to this stock again.

Both of these pot stocks could double in value this year, given how cheap they are today: 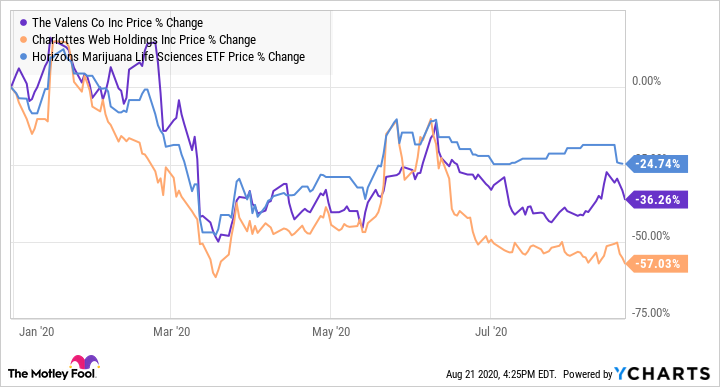 But Charlotte's Web is the stock I'd wager is more likely to double or more. That's mostly because the U.S. cannabis market is red-hot this year. There have been record sales in several states including Colorado and California and many consumers are looking for ways to buy products that don't involve an in-store visit. This spells a great sales scenario for Charlotte's Web's DTC business. If Charlotte's Web can come back with a profitable Q2, the stock could easily get back to its 2020 starting price of $8.