Coeur is largely a gold company, but not exclusively. That likely had an impact on investor sentiment today.

Coeur, like most precious-metals miners, doesn't produce just one commodity. The revenue mix for the company in 2019 was 69% gold, 27% silver, and 4% split equally between zinc and lead. That's a huge difference from the mix a decade ago -- 69% silver and 31% gold. The company decided to make the shift after gold had been performing better than silver for a number of years. However, many still associate Coeur with its silver-focused history. That's not unreasonable given the still-significant level of silver in the revenue mix. 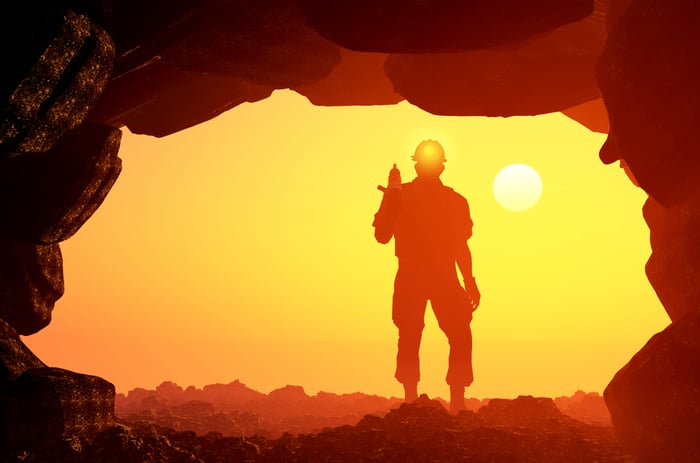 This year, Coeur shut down some of its assets amid the COVID-19 pandemic. As a result, gold accounted for 83% of revenue, with silver at 17%, in the second quarter. Zinc and lead basically fell off the list. The company is bringing key mines back online, so silver's piece of the pie should increase in the quarters ahead. So far, that's had a positive effect, given that silver has generally been in rally mode since hitting a low in March. Only today the price of silver is falling. Investors appear to be taking a dour view on the stock because Coeur should start seeing silver production return at a time when silver isn't doing as well as it had been just a short while ago. Although one day doesn't make a trend, silver has been much more volatile than gold over the past month, so concern about the metal's ability to remain in an uptrend isn't unreasonable.

Gold and silver are commodities prone to volatile price moves. Although investors are down on Coeur's shares today, perhaps due to the drop in silver prices, tomorrow could see a complete reversal of that viewpoint -- particularly if silver prices go up again. Long-term investors looking at precious metals should probably focus on the diversification benefits that mining stocks can provide to a portfolio and ignore the day-to-day price swings. That said, Coeur's stock is up around 200% since the lows reached during the early-2020 bear market, a very large move in a very short period of time. Investors looking for a "safe haven" investment might want to consider cash as an alternative to Coeur stock right now.