Please ensure Javascript is enabled for purposes of website accessibility
Log In Help Join The Motley Fool
Free Article Join Over 1 Million Premium Members And Get More In-Depth Stock Guidance and Research
By Rick Munarriz - Updated Sep 3, 2020 at 10:26AM

The movie of the summer premieres tonight, and IMAX has more at stake than the company putting out the film and the country's largest multiplex operator.

It's the multiplex event of the season. Tenet, Christopher Nolan's action thriller that is bankrolled by AT&T's (T 0.17%) Warner Bros. studio, has its official stateside theatrical premiere on Thursday night. The film comes at an ideal time, with leading exhibitor AMC Entertainment Holdings (AMC 7.56%) having 70% of its U.S. movie houses open by this weekend and hungry for its first hit since February. And AT&T can help justify its risky Time Warner acquisition with a blockbuster.

AT&T and AMC Entertainment have a lot riding on how the theatrical run plays out, but they may not be the biggest beneficiaries if Tenet is a smashing success. IMAX (IMAX -1.19%) could be the publicly traded company with the most on the line here. Tenet director Nolan has been behind some of the biggest hits on IMAX's supersized platform. Larger-than-life films including Inception and The Dark Knight have been huge for IMAX, and Tenet is already shaping up to be the latest Nolan flick that's meant to be seen on IMAX. It was even shot on IMAX film. 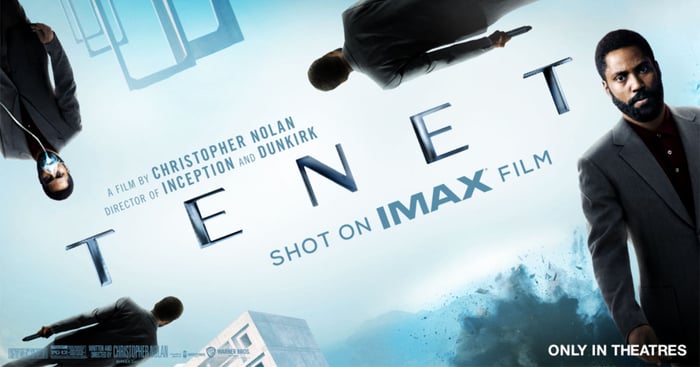 We already know that audiences internationally -- where Tenet has already debuted -- haven't had a problem paying a premium to see the film on IMAX instead of traditional screenings. The film generated roughly $53 million in worldwide ticket sales across all theaters in the 40 markets where it was playing last weekend, and IMAX accounted for 9.4% of the revenue mix.

Drumming up nearly $5 million in ticket sales may not seem very exciting for IMAX, but it represents just 1% of its screens that were showing the film last week. The 248 screens worldwide showing Tenet averaged $20,000 in ticket sales over the weekend, 7.5 times the overall per-screen average. Distribution will take a big step up this weekend with an additional 900 IMAX screens showing Tenet in the U.S., Russia, and China.

It makes sense. If you're going to go out in this pandemic, risking COVID-19 in a movie theater, you're not going to flinch at paying a few bucks more to see it with superior visuals and sound on IMAX. Even in a recession, folks will pay up for entertainment. A strong showing by Tenet for theaters in general will validate the multiplex industry, but it's going to be a bigger statement for the importance of IMAX in maximizing the monetization of any major theatrical release.

The per-screen averages will suffer as a result of social distancing, but that will give Tenet a bigger chance to stick around longer. IMAX screenings will sell out for more than just the first weekend or two, and it should continue to be the industry's top draw into at least October given the weak pipeline of upcoming releases. If the film industry is worth saving, it's going to happen this weekend, and IMAX will have a starring role.