Please ensure Javascript is enabled for purposes of website accessibility
Log In Help Join The Motley Fool
Free Article Join Over 1 Million Premium Members And Get More In-Depth Stock Guidance and Research
By Rachel Warren - Updated Sep 4, 2020 at 11:42AM

These three stocks are among the few winners to emerge from the coronavirus stock market.

Despite widespread surmising, no one knows if or when the next coronavirus market crash will come. Investors (and the world) are on tenterhooks waiting to find out whether an effective vaccine will make it to market so that presumably, we can all gain back a sense of normalcy in daily life. The S&P 500, the Dow Jones Industrial Average, and the Nasdaq Composite have been breaking records in recent days, and the soaring stock market can be attributed in large part to growing optimism about finding a cure for COVID-19.

If you have $1,000 to invest in the stock market right now, you may be hesitant to use it to scoop up shares of any stock, given uncertainty about further pandemic-induced volatility. But there are still plenty of attractive choices to recession-proof your portfolio. Here are three stocks that can provide some insulation in the event of another coronavirus market crash. 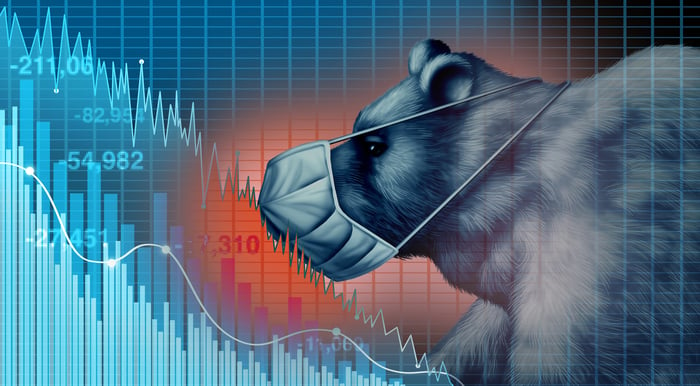 Tandem Diabetes Care (TNDM -3.43%) creates and manufactures medical devices including insulin pumps, infusion sets, and pump accessories. Shares of the company fell about 41% in March, but are now up by more than 87% year to date.

The company has reported stellar sales growth throughout all stages of the pandemic. When you consider that approximately 8.3 million diabetics require insulin in the U.S. alone, this continuing demand for Tandem's products isn't surprising. During the first quarter of 2020 (which ended March 31), the company reported a 48% year-over-year increase in global sales, with global pump shipments rising by 18% and domestic pump shipments up 36%.

During the second quarter, which ran through June, Tandem's worldwide sales saw a 17% increase year over year to $109.2 million. Domestic pump shipments were up 15%. The company finished out the first six months of the year with $426.3 million in cash.

Management reinstated their previously withdrawn sales guidance in the Q2 earnings report, citing record demand for the company's t:slim X2 insulin pump. The company expects to achieve up to 28% sales growth for all of 2020, projecting figures in the ballpark of $450 million to $465 million.

Vertex Pharmaceuticals (VRTX -1.22%) continues to impress investors this year. The stock is trading about $100 higher than it was a year ago and has rebounded by more than 35% from its March lows. The company currently has four approved medicines on the market -- Trikafta, Symdeko, Orkambi, and Kalydeco -- all for the treatment of the genetic disease cystic fibrosis. Trikafta is Vertex's best-selling medicine, even though it hasn't yet been a full year since it received the U.S. Food and Drug Administration's (FDA) stamp of approval.

Vertex Pharmaceuticals also raised its guidance for 2020 in its Q2 earnings report. Whereas the company had projected earnings in the $5.3 billion to $5.6 billion range, it now expects to see between $5.7 billion and $5.9 billion. 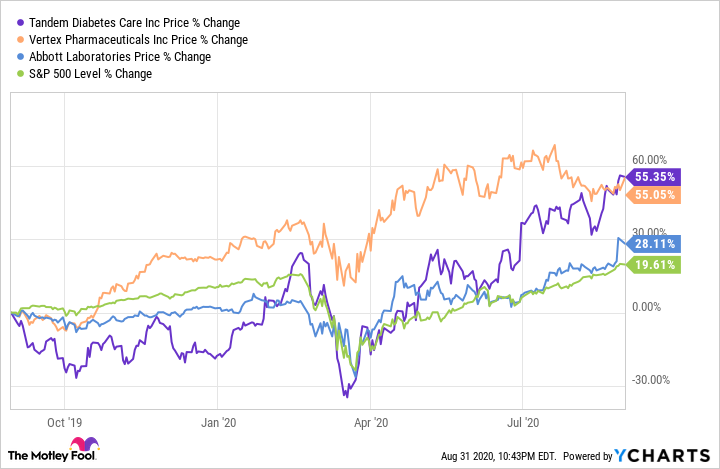 In business since 1888, Abbott Laboratories (ABT 0.20%) boasts an extremely diverse portfolio including cardiovascular solutions, medicines, and nutritional products.

In particular, it's been in the news lately thanks to its coronavirus diagnostic tests. On Aug. 26, the company announced that its 15-minute coronavirus antigen test (which detects active infection) had been given an Emergency Use Authorization (EUA) by the FDA. The best part? The test will be sold for just $5. The company aims to be able to ship 50 million tests a month by early October. Abbott has also developed several other COVID-19 tests, including point-of-care molecular tests (also for current infections) and an antibody blood test (which detects previous infection).

The stock has gained about 26% since the beginning of the year. The company does pay a dividend, and while its yield of 1.32% is relatively modest compared with the S&P 500 average of 2%, it has increased its payouts for 48 years in a row. This makes the stock a Dividend Aristocrat (which requires 25 years of increases), and almost a Dividend King (50 years).

Abbott Labs achieved global sales totaling $7.3 billion in Q2 2020, $615 million of which were attributable to its coronavirus tests. Global sales in its nutrition segment were up 0.4% in the quarter, while worldwide diagnostic sales rose by 4.7%. A decline in certain routine procedures being performed due to the pandemic led the company to report a 21.2% decrease in its medical device segment in Q2 2020. Finally, Abbott's TriClip heart valve repair system received the European Union's CE certification mark in April, significantly expanding the TriClip's footprint outside the U.S. The product is marketed as "the world's first minimally invasive, clip-based tricuspid heart valve repair device."

Abbott expects to achieve diluted earnings per share for the full year totaling $2 or higher. This is a slight decrease from the projections management made in the fourth quarter and full-year 2019 financial report, when they anticipated diluted EPS growth according to generally accepted accounting principles (GAAP) in the ballpark of $2.35 to $2.45 in 2020. However, Abbott withdrew its full-year guidance in the Q1 report, citing unpredictabilities concerning the length of the pandemic and its effect on its business. The fact that Abbott has now reissued annual guidance is a sign of management's confidence in the company's profitability this year and its ability to stave off overtly adverse effects from the pandemic.