Shares of Adobe (ADBE 1.18%) rose 15.5% during the month of August, according to data from S&P Global Market Intelligence. The creative cloud software giant, home to Adobe Photoshop, Illustrator, Acrobat, and other digital marketing tools, rose along with the rest of the technology sector during a very strong August for the markets in general and tech in particular.

Adobe itself didn't report earnings, but seemed to move higher when other cloud software stocks showed strong results during the month. 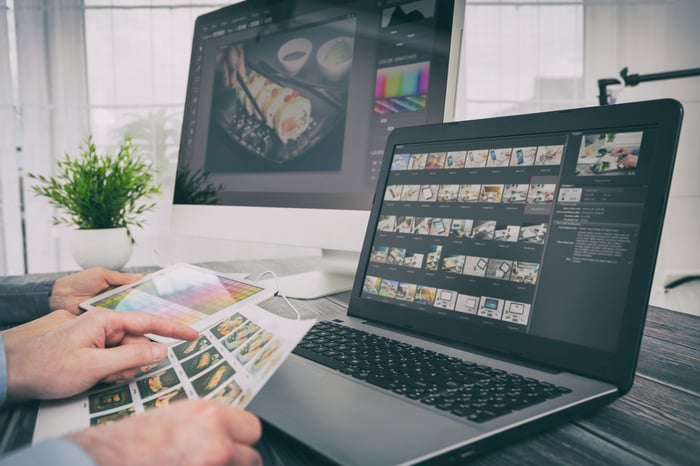 Adobe's stock rose along with other leading technology software stocks, as relatively strong results from the sector have made investors bullish on these names to weather the COVID-19 pandemic -- or even thrive because of it. Adobe's stock had pulled back a bit in July after its third quarter guidance came in a tad soft, but regained momentum in August. Strong results from fellow cloud software peer Salesforce (CRM 1.91%) toward the end of the month seemed to propel Adobe higher by association after the period of consolidation.

Just as Adobe has drifted up with the technology sector at the end of August, it was hit hard last week in the rapid technology sell-off.

Even after the sell-off, Adobe trades at a sky-high 67 times trailing earnings and about 46 times forward earnings, which still makes it very expensive. However, the company's recurring revenue model, operating leverage (in which income increases more than revenue), and the current low interest rate environment have continued to push Adobe's stock higher.

I'm not going to say that Adobe is too expensive to buy, as it's a high-quality large cap tech stock with a substantial moat in its core graphics software business. However, I also wouldn't be surprised if it had a bigger pullback. If it does, Adobe still appears to be a safe stock to buy and hold for the long-term, so risk-off investors may wish to keep it on their watch lists in case a pre-election pullback does in fact happen.