The ongoing reshaping of the business should attract the income-minded.

Before the onset of the COVID-19 pandemic, Coca-Cola (KO -1.37%) was fixated on supplementing revenue growth with the improvement of its business operations. As it responds to challenges during the coronavirus era, the company is embarking on what seems an acceleration of the previous strategy, and dividend investors should take notice.

Coca-Cola revealed on Aug. 28 that it's planning to scale down its 17 business units to nine; the company's Global Ventures and bottling investment operations will continue to operate outside this structure. The streamlined units will be assisted by an internal organization called Platform Services, which will provide operational support, including "data management, consumer analytics, digital commerce, and social/digital hubs."

This emphasis on data will be helpful in achieving the current goal of trimming down the company's mammoth brand portfolio. In its most recent quarter, Coca-Cola shared an illuminating statistic: Less than 50% of its 400 master brands, which primarily have a global, regional, or local focus, make up 98% of annual company revenue. Conversely, over half of master brands -- ones that are mostly country-specific -- contribute just 2% to the top line. In last week's announcement, the organization stated that it will now favor brands within the global/regional/local framework across the following five categories: Coca-Cola beverages, sparkling flavors; hydration, sports, coffee, and tea; nutrition, juice, milk, and plant; and "emerging categories."

The beverage leader is also planning to cut workforce positions as it realigns units and leans into productivity. Starting this month, it will offer a voluntary separation package to 4,000 employees in the U.S. and expects to offer similar packages in the near future to global employees. Coca-Cola further revealed that it intends to initiate "involuntary" position cuts, i.e. layoffs, after the voluntary separations. The global severance programs are expected to result in expenses of between $350 million and $550 million. Shareholders are likely to hear from management in the next earnings report on the projected annualized savings from voluntary and involuntary position reductions. 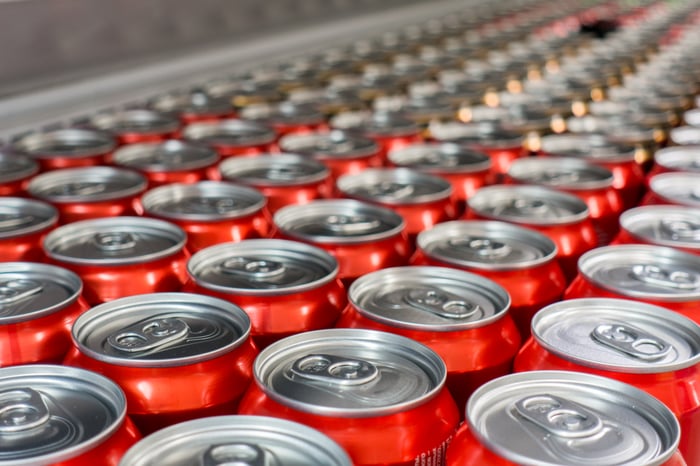 A boon for income portfolios

For the dividend investor, these changes are important because they provide support for another, less publicized decision that management has made over the past few quarters -- to peg dividend growth to the amount of free cash flow the company generates, and maintain a dividend payout ratio of 75%.

While this payout ratio tilts to the high side, it's acceptable for a company with as stable as cash flows as Coca-Cola, especially since dividend expansion will follow the growth in free cash flow, or cash left over after the funding of operations and investments in fixed assets.

Except for a spike in 2017 and 2018 as the company divested its North American bottling operations to partners and saw a temporary dip in net income, Coca-Cola's payout ratio has fluctuated between 50% and 100% for most of the 2000s. A steadier target at 75% is meant to reinforce the stock's attractiveness to income-seeking investors. This new mindset is already apparent in dividends paid over the past four quarters: 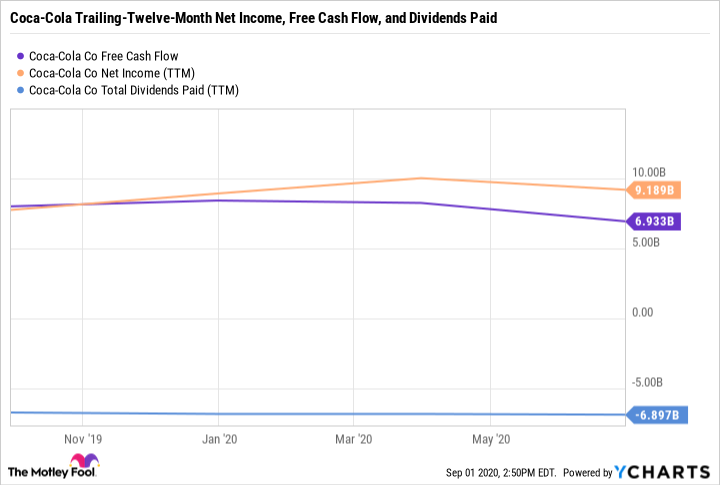 Over the past four quarters, the consumer staples giant has shelled out dividends of just under $6.9 billion, or exactly 75% of net income. This payout is also almost equal to the free cash flow of $6.93 billion generated during the period.

Notice the inflection point in the chart in late March 2020 as both net income and free cash flow dipped in the first quarter -- a consequence of COVID-19. In Coca-Cola's second-quarter earnings conference call, management relayed that a trend of volume recovery is under way. From year-over-year declines of 25% recorded in April, volumes have steadily improved and were just down by single digits versus the prior year in the first few weeks of July.

In the coming quarters, I believe Coca-Cola's investments in revenue growth, along with the streamlining of operations and a continued winnowing of non-essential brands, will burnish its value proposition as COVID-19 fades from view. Better yet, income investors purchasing Coca-Cola shares today can enjoy a dividend yield of 3.2%. Looking ahead, this generous yield may dip as new investors rediscover the merits of a stable, growing, high-margin business and bid shares up over time.