The coffee giant continues to add more variety to its menu and has revamped its rewards program to make it more attractive.

Shares of Starbucks (SBUX 1.62%) gained 10.4% in August, according to data provided by S&P Global Market Intelligence.

Despite the pandemic, the coffee giant's shares have almost recovered all their losses since the beginning of the year and are up 50% from their lowest point in late March. 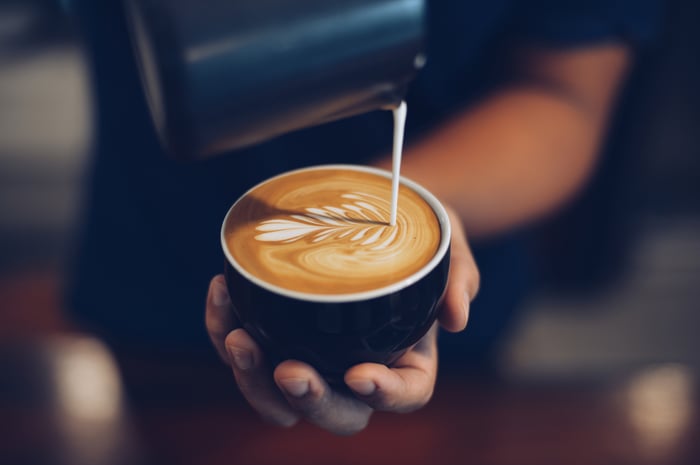 Although the COVID-19 pandemic had forced the temporary closure of a majority of Starbucks' outlets around the world from February to May, the vast majority of stores had reopened by the end of the company's fiscal third quarter, which ended in June. When Starbucks reported its third-quarter earnings at the end of July, it announced that approximately 97% of its global company-operated stores were open, while 87% of its global licensed-store portfolio has reopened.

The company has also announced plans to roll out new convenience-led formats with curbside delivery and smaller pickup-only stores. Curbside delivery will be launched in several hundred existing locations soon, while over 50 Starbucks Pickup locations will be added in the next 12 to 18 months. These new formats will help to boost growth for the company as it recovers from the pandemic-led closures.

The Starbucks loyalty program has undergone a revamp, too, giving customers an easier way to earn points. When paying with a pre-loaded Starbucks Card, you will earn two Starbucks Stars per $1 spent. But beginning Sept. 15, you can also earn one Starbucks Star per $1 spent if you pay in cash, or with a debit or credit card or mobile wallet. These changes give customers more bang for their buck.