Please ensure Javascript is enabled for purposes of website accessibility
Log In Help Join The Motley Fool
Free Article Join Over 1 Million Premium Members And Get More In-Depth Stock Guidance and Research
By Keith Noonan – Updated Sep 7, 2020 at 9:51AM

News that one of the home security company's biggest competitors is teaming up with a technology giant sent shares tumbling. 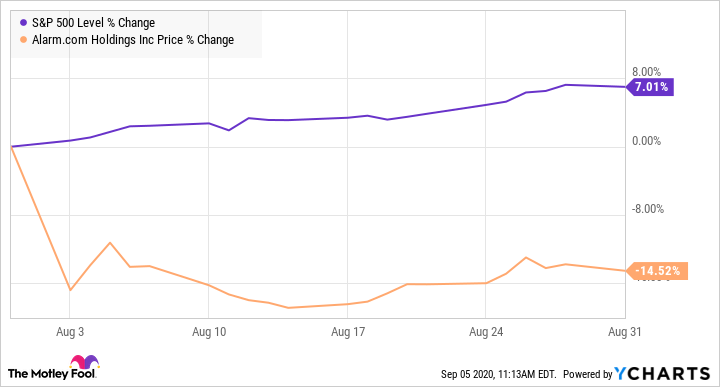 Google announced on Aug. 3 that it would be integrating its Nest smart-home platform with ADT. The tech giant also revealed that it had purchased a 6.6% stake in ADT for $450 million.

Comments from Google suggest that the ADT partnership will continue to evolve and that Nest devices will eventually become the cornerstone of ADT's smart-home business. Alarm.com stock saw a bit of recovery after the company published better-than-expected second-quarter results on Aug. 5, but the gains were short-lived, and shares moved lower as the month progressed.

The business' Q2 sales growth and earnings beat was aided by a 16.2% year-over-year increase for software-as-a-service (SaaS) and license revenue, which reached $95.7 million in the period. Free cash flow rose 49% year over year in the period, to $31.8 million.

Alarm.com stock has continued to move lower in September's trading. The company's share price is down roughly 6% in the month so far. 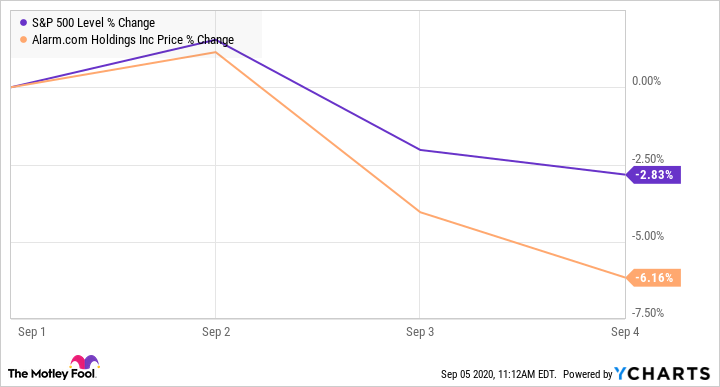 Alarm.com has a market capitalization of roughly $2.9 billion and is valued at about 40 times this year's expected earnings and 5.1 times expected sales.