Please ensure Javascript is enabled for purposes of website accessibility
Log In Help Join The Motley Fool
Free Article Join Over 1 Million Premium Members And Get More In-Depth Stock Guidance and Research
By Jennifer Saibil – Sep 8, 2020 at 8:13AM

The activewear company's falling sales and stock price don't bode well for the future, but there are some positives.

Under Armour (UA 3.76%) (UAA 4.79%) remains the underdog in athletic apparel and footwear sales. And while Americans love an underdog, hoping for a change is a risky strategy for stock market investors. The company, which was once a rising star in performance athletic wear, has been plagued with underperforming sales, the loss of its premium reputation, and an accounting fraud investigation. And that was before COVID-19.

Since Under Armour came into the pandemic already struggling, it was no surprise that its sales dropped 41% in the second quarter ended June 30, which covered most of the global lockdown. Most of that came from wholesale channels, which decreased 58%, while direct-to-consumer revenue fell a milder 13%. Net loss was $183 million. On a positive note, sales were better than the 50% to 60% decline management expected, and gross margin increased 280 basis points year over year to 49.3%. 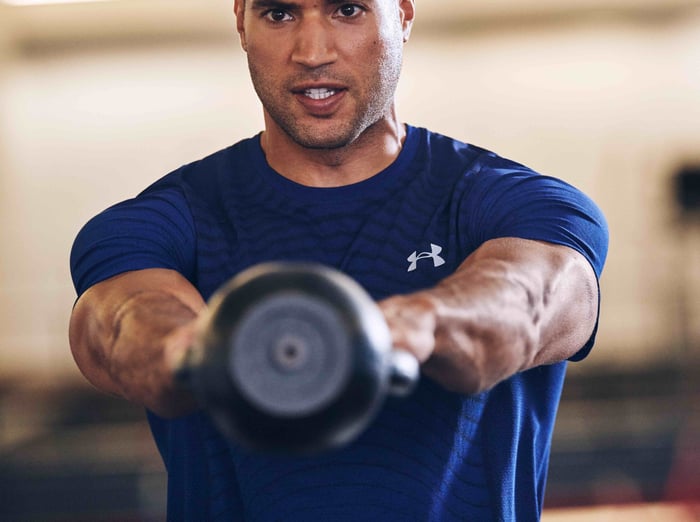 Under Armour has also seen improvement in digital brand engagement and a "meaningful" increase in new users. And an important development for the company is its inventory reduction, which positions it better for rebuilding its name as a premium brand. Even with the sales drop, Under Armour is still a more than $700 million business, and its cash position is a strong $1.1 billion in cash and cash equivalents.

Under Armour shares are down more than 50% year to date as of Tuesday morning and have a 40% three-year return. They're selling for less than $10, which makes them cheap if investors foresee a comeback. But given where the company's holding right now, investors might want to take a pass.