Here's why you should trust the wisdom of the crowd when it comes to these three stocks.

Buying shares of popular companies with strong growth prospects has always been a favorite tactic of market participants. Now investors can do so with next to zero commission while utilizing a smart user interface such as the Robinhood App.

Even with the stock market on a roller coaster this year, the platform saw as many as two million new users added in the first quarter of 2020 alone, and it has curated a list of the hottest on-demand stocks its users are buying right now. There are many candidates on Robinhood's top 100 most popular stocks leaderboard that can make investors rich. Today, let's look at just three examples. 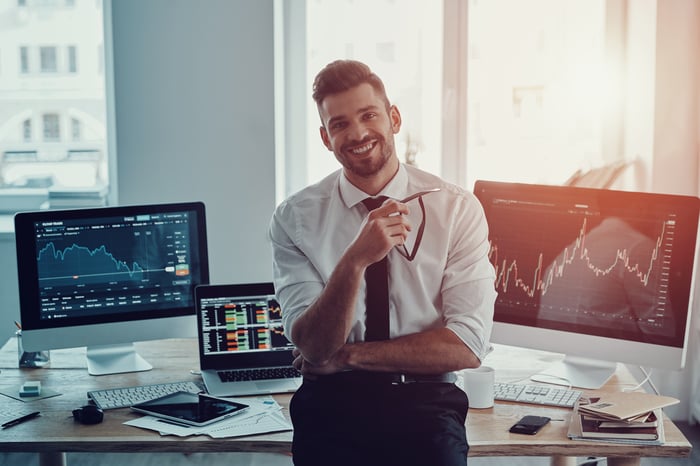 The second quarter of 2020 was another quarter of record earnings for tech giant Apple (AAPL 1.37%). For starters, the company's sales grew by 11% year over year to $59.7 billion. Out of its portfolio mix, software and service revenue grew by 15% to $13.2 billion, led by strong performance in Apple News, Apple TV+, and App Store sales.

The company now has 550 million paid subscribers to its services, an increase of 35 million since Q1 2020. Last year, the company's App Store contributed an estimated $500 billion to global e-commerce.

Strong consumer demand also uplifted Apple's hardware segment, with Mac sales up 22% and MacBook products up over 30% compared to last year. The company's hardware segment accounts for $46.5 billion worth of sales.

Overall, investors should expect Apple to maintain this level of growth in its business thanks to many of its incentives. For example, the company recently rolled out the Apple Card, which would allow costumers to buy Apple devices at 0% interest.

Furthermore, Apple is also solidly profitable with a 38% gross margin and $11.3 billion in quarterly earnings, an 18% improvement from last year. If that wasn't enough, the company also has more than $193 billion in cash on its balance sheet, which is more than enough to offset its $113 billion in long-term debt.

Next up on our list is one of the nation's biggest airlines. In June 2020, American Airlines (AAL -1.26%) saw a significant rebound to its business as more and more travelers regained confidence in air travel. The partial removal of lockdown measures designed to contain the coronavirus also helped the company's recovery.

During the quarter, the company flew almost twice as much as competing airlines in terms of flight schedules. While the airline burned as much as $100 million in cash per day in April, management has been aggressively cutting costs by eliminating unprofitable routes and reducing its fleet size. In June, American Airlines' cash burn per day went down to $30 million.

By next year, management expects the company will break even in terms of daily cash use. What's more, the company's revenue will likely see a significant rebound as a coronavirus vaccine may be available as early as October, decisively restoring consumer confidence in air travel. Keep in mind that this company generated $10 billion in revenue in the past six months but still has a market cap of just $7 billion. Speaking of a coronavirus vaccine, Inovio Pharmaceuticals (INO 1.21%) has just the right candidate, named INO-4800, in its pipeline. INO-4800 is a DNA vaccine that encodes for a key protein in SARS-CoV-2 that facilitates the virus' entry into host cells. In phase 1 clinical trials, the overwhelming majority of participants who received INO-4800 developed neutralizing antibodies and T-cell responses against the coronavirus.

Neutralizing antibodies are small proteins that recognize a pathogen's specific components and prevent it from invading healthy cells. T-cells recognize virus-infected cells and tell those cells to self-destruct, preventing the virus from spreading throughout the body. Unlike antibodies, which may disappear just weeks after dosage, T-cells can form memories of pathogens for months or years.

The experimental vaccine will start to advance into phase 2 by the end of the year. Although its data looks decent, it is crucial to note Inovio is in a legal battle with its contract manufacturer, with the latter alleging Inovio stole its technology. As a result, the company may not be able to supply 100 million doses of INO-4800 by 2021, as it projected in its Q2 2020 earnings release.

Nonetheless, if the vaccine is successful in clinical studies and the manufacturing dispute resolves, INO-4800 could generate ample revenue. Even at $20 per dose, that equates to $200 million in sales for every 10 million doses (enough for 5 million people). Currently, Inovio only has a market capitalization of $1.65 billion. Investors looking for biotech stocks with a high-risk, high-reward profile may wish to add Inovio to their watch list.