The pharma giant controls a massive addressable market and has proven its ability to increase drug sales.

It's no secret that investing in the stock market can make you rich. Then again, not all stocks fall into the category of millionaire-makers. In fact, many don't.

The good news is, you don't have to be rich to start your investing journey. By investing actively and often, while focusing on diversifying your portfolio by buying a versatile basket of stocks -- always with a forward-thinking, long-term mindset -- you can build a sizable portfolio in 10, 20, or 30 years.

Every once in a while, though, a stock with millionaire-maker potential does come along. Investors have been abuzz about cystic fibrosis drugmaker Vertex Pharmaceuticals (VRTX 2.50%) this year, as the stock has consistently outperformed the S&P 500 since the start of 2020. While the wider market sunk to the depths in March, Vertex shares only dipped slightly; they're currently trading 48% higher than they were one year ago.

But could Vertex Pharmaceuticals make you a millionaire? Let's take a closer look. 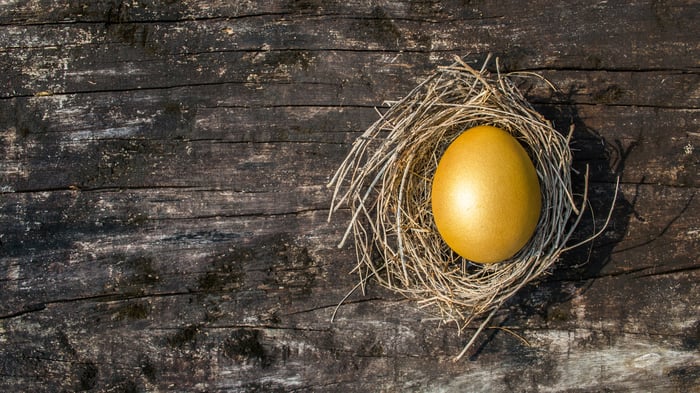 A large-cap stock with a stalwart balance sheet

Vertex's approved medicines are all for the treatment of cystic fibrosis, and its star product is Trikafta. The prescription medicine, which some have deemed a "miracle drug," helps to remedy cystic fibrosis transmembrane conductance regulator (CFTR) proteins that aren't functioning properly. Cystic fibrosis is a hereditary disorder that occurs when the CFTR gene becomes mutated. Trikafta was approved last fall for individuals aged 12 and older who have one or more F508del mutations (a kind of CFTR mutation), which means that approximately 9/10 of cystic fibrosis patients qualify for the blockbuster drug.

The drug's approval has had a major impact on Vertex's balance sheet in the past two quarters. The company reported a 77% year-over-year increase in its revenue for the first quarter of 2020, and for the second quarter, that number was 62%.  Vertex's three other approved cystic fibrosis drugs -- Orkambi, Symdeko/Symkevi, and Kalydeco -- may not be on par with Trikafta's money-making abilities, but they have also been key sources of revenue growth for the company over the past few years, with revenue of of $1.2 billion, $1.4 billion, and $991 million, respectively, in 2019. The year before, total product sales for these drugs were $1.3 billion, $769 million, and $1 billion, respectively.

All of these drugs look poised for future ongoing profitability. On Sept. 1, management announced the submission of three supplemental New Drug Applications (sNDAs) to the U.S. Food and Drug Administration (FDA) for Trikafta, Symdeko, and Kalydeco. If the FDA approves the new indications, patients with certain rare mutations of the CFTR gene who do not currently qualify for these drugs would be afforded access. Of course, label expansion would also translate to higher profits for Vertex.

Other companies may be flailing during the pandemic, but not Vertex. It closed the most recent quarter with $5.5 billion in cash, cash equivalents, and securities, compared with outstanding liabilities of $2.7 billion. The company expects to report nearly $6 billion in revenue this year. Vertex Pharmaceuticals holds a current market capitalization of just over $69 billion. It has also consistently increased its revenue by meaningful percentages every year for the past few years -- 37% in 2019, 40% in 2018, and 29% in 2017.

When evaluating a company to see whether it might have millionaire-maker potential, assessing how its stock has grown over the years is a good place to start. Vertex went public in 1991, just shy of three decades ago.

If you had invested in the company shortly after its initial public offering (IPO) date, you could have purchased one share for just $5. Now, let's imagine that you invested $10,000 in Vertex Pharmaceuticals nearly 30 years ago, right after its IPO, for about $5 per share. You would have been able to purchase 2,000 shares of the company. Today, that investment would be worth approximately $533,000.

The short of it

Yes, Vertex Pharmaceuticals could absolutely be a millionaire-maker for investors who have more cash to spend on the stock. Even though an investment in Vertex won't have a seven-figure upside for everyone, there's no doubt that this company has more room to grow.

The cystic fibrosis market is set to reach a nearly $32 billion valuation by 2027, according to a report from Fortune Business Insights. While Vertex certainly isn't the only company that boasts cystic fibrosis therapeutics -- one prominent example is Gilead Sciences' (GILD 2.51%) inhalation solution, Cayston -- the company is the unquestionable leader of this market. An August 2019 study published by research firm Reports and Data found that Vertex held a 46% share of the entire cystic fibrosis market worldwide.

Bear in mind, this was a few months before the FDA's approval of Vertex's blockbuster Trikafta, which the agency hailed as a "breakthrough therapy,"  noting that it is "the first triple combination therapy available to treat patients with the most common cystic fibrosis mutation." It should also be noted that Vertex' four approved products (Orkambi, Symdeko/Symkevi, Kalydeco, and Trikafta), which work to restore defective CFTR proteins, are the only CFTR modulators currently on the market.

One thing's for sure. As Vertex Pharmaceuticals continues to boost profits with its foothold in the multibillion-dollar cystic fibrosis market, investors who are in it for the long-haul most certainly stand to reap the benefits.