The race to make faster-than-sound missiles is heating up.

After years of prep work a new generation of high-speed weapons is about to take to the skies.

For the Pentagon, these missiles are a key part of a new arms race developing between the U.S., China, and Russia. For the contractors involved, they could be the key to thriving to an inevitable slowdown in defense spending.

Time to take the training wheels off hypersonics

The Pentagon's research arm has cleared rival prototype hypersonic missile designs made by Raytheon Technologies (RTX -0.63%) and Lockheed Martin (LMT -0.01%) for free-flight testing later this year, a key milestone in the military's effort to acquire weapons capable of traveling more than five times the speed of sound.

The Defense Advanced Research Projects Agency (DARPA) on Sept. 1 said that two variants involved in its Hypersonic Air-breathing Weapon Concept (HAWC) have successfully completed "captive carry" tests. Captive carry is when a larger aircraft carries a smaller craft, in this case a missile, without releasing it in flight, and it is used to test how well a new design holds up under the stress of flight. 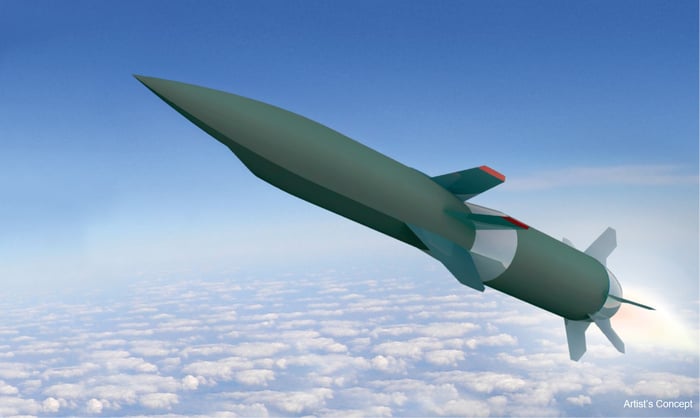 The development is a big deal for the military, which has made hypersonics a priority, and bodes well for the two contractors involved.

"Completing the captive carry series of tests demonstrates both HAWC designs are ready for free flight," Andrew Knoedler, DARPA's HAWC program manager, said in a statement. "These tests provide us a large measure of confidence ... that gives us faith the unique design path we embarked on will provide unmatched capability to U.S. forces."

A new generation of weapons

The HAWC, as the name implies, is a super-fast missile concept powered in part by the atmosphere, using a mixture of traditional fuels and air.

This program is part of a broader effort to create a new generation of more versatile weapons for the Air Force. Much of the development up until now has been focused on boost-glide hypersonics, which fly just at the edge of space. An air-breathing missile is better able to fly through the atmosphere, opening up a wide range of potential applications and targets.

Much of the work is top secret, though we do know that both designs use some sort of a "scramjet" air-breathing engine. Scramjets usually do not work well at low speeds and often are combined with a rocket engine to get them going. Raytheon has also said its entry is a "waverider," meaning it is designed to glide along shockwaves it generates as it flies at top speeds to help keep it airborne.

The stakes are huge. Military officials have identified hypersonics as an area where the U.S. could be trailing Russia and China. The Pentagon in a report to Congress on Chinese military development released Sept. 1 said, "China has placed a heavy emphasis on developing and testing hypersonic glide vehicles," noting the government debuted a new missile during its anniversary parade last October.

It's no surprise seeing Lockheed Martin's name on the list of contractors here. The government in 2018 identified the company as the clear leader in hypersonics research, and Lockheed Martin has taken in billions in development awards in the quarters since.

Given the importance of hypersonics, the Pentagon will want several viable challengers working on competing designs. The HAWC program suggests that Raytheon, which is working with Northrop Grumman (NOC -1.18%) on this project, is up to the task. Raytheon is the government's supplier of several major missile systems, and its merger with United Technologies earlier this year gives it access to aircraft engine maker Pratt & Whitney's research and technologies.

Hypersonics are of particular importance to contractors right now because after five years of expanding Pentagon budgets, military spending growth is expected to wane in the coming years, meaning military leaders will have to make tough choices about what programs to fund. Hypersonics figure to hold up well under close budget scrutiny.

Defense contractors are adept at following the money, and there are a large number of top and second-tier companies working on hypersonic development. I'd expect the Pentagon to try to disperse initial funding as broadly as possible, but as the numbers get bigger and weapons move from concept to production, there is only going to be a handful of winners.

Investors in Lockheed Martin have ample reason to believe hypersonics will be a big boost to the company's backlog and help fuel growth, even in a stagnant budget environment. The new Raytheon Technologies is facing an uphill climb due to its large exposure to commercial aerospace. Areas like hypersonics are going to have to come through for the stock to outperform in the years to come.