The tech giant's corporate-communications software will be used for much different purposes during pro football games.

For several years, Microsoft (MSFT -1.48%) has had a notable presence on the fields of National Football League games through a sponsorship with its Surface tablet brand. Now it'll be in the stands, too, thanks to an expanded partnership deal with its Teams software.

Through Microsoft Teams, a Fan Mosaic of viewers on monitors will be in place as a virtual crowd at the stadiums hosting games.

The more-dedicated fans will be invited by the home team to take part in a "virtual VIP" experience, in which they will watch the game collectively via a Microsoft Teams meeting. These video feeds of individual fans will be mixed into the Fan Mosaic, and audio from them will be used to augment the virtual crowd noise. 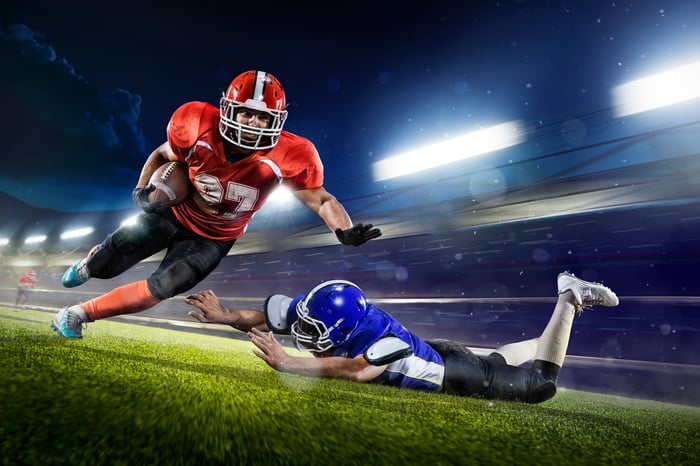 For those favoring a stronger connection with their heroes on the field, the new system will (apparently randomly) put fans from the Mosaic on dedicated screens at each end zone after a touchdown, "allowing them to connect and celebrate the moment," in Microsoft's words.

The tie-up between Microsoft Teams and the NFL began in March, with an expansion of the two organizations' sponsorship deal to cover the software brand. According to the company, numerous squads, including last year's Super Bowl champion Kansas City Chiefs, use Teams for a variety of purposes.

In its press release heralding the new virtual-fan aspect of the Teams sponsorship, Microsoft said, "In a season of countless challenges, we are honored to deploy Microsoft's powerful combination of hardware and software to help the NFL bring football to people everywhere."

Neither Microsoft nor the NFL has provided any financial details about their partnership. On Thursday (opening day of the NFL season), Microsoft's shares fell by 2.8%.