After growing to become the largest and most powerful social networking conglomerate on the planet, Facebook (NASDAQ:FB) is now looking to return to its humble beginnings. When CEO Mark Zuckerberg created the site in 2004, the platform quickly evolved into a social network exclusively for college students before opening its virtual doors to the broader public in 2006.

It's time to go back to school. 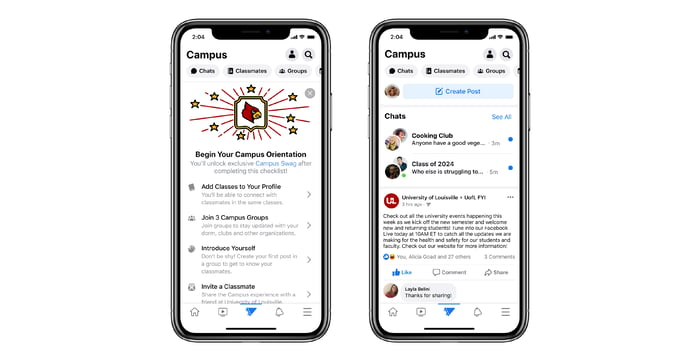 This week, Facebook unveiled Facebook Campus, a new dedicated college-only section designed to connect classmates. With many students now heading back to their universities under extraordinary circumstances due to the COVID-19 pandemic, Facebook says it wants to help students build and maintain connections, a process that is fundamentally more challenging due to social-distancing guidelines.

Facebook Campus will reside within the main Facebook app for students and users will have a specific Campus profile that will include optional information such as their major and graduation year. Campus will be somewhat segregated from the main platform, with any shared posts only being visible to other Campus users.

Mobile app researcher Jane Manchun Wong, who digs through code to find clues about what major tech companies are working on, had spotted Campus earlier this year.

Facebook is working on "Campus", a new space exclusive for college students

There will be Groups, Events, etc for "Campus" spaces pic.twitter.com/cfEwubLxTt

Campus will feature a dedicated News Feed that only displays information that is relevant to the specific college and there will be tools that allow students to organize events like study groups. Students can search their college directories to find peers that might have shared interests, and there will be a new messaging service called Campus Chats, as if Facebook didn't already have its hands full in trying to stitch all of its existing messaging platforms together as part of Zuckerberg's grand unified messaging plan.

The company is already starting to roll out Facebook Campus to select colleges and universities around the country.

Keeping you in the ecosystem

It's unclear if Facebook plans to monetize Campus directly, with ads or otherwise, but the company is proactively highlighting the privacy controls available within the new section. Facebook acknowledges that a user's activity on Campus can and will be used for ad-targeting purposes. The company suggests that ads might be displayed within Campus, noting that "your activity on Facebook may influence what you see in Campus, and your activity in Campus may influence what you see elsewhere on Facebook."

Even if there are no ads shown directly in Campus, the new service is a clear engagement play aimed at keeping users on Facebook's family of apps, where it has no shortage of monetization opportunities.