Please ensure Javascript is enabled for purposes of website accessibility
Log In Help Join The Motley Fool
Free Article Join Over 1 Million Premium Members And Get More In-Depth Stock Guidance and Research
By Leo Sun – Sep 11, 2020 at 11:56AM

The Chinese tech giant is seeking investors for a $2 billion investment in a new AI-powered biotech venture.

Chinese tech giant Baidu (BIDU 0.61%) is in talks with interested parties to invest up to $2 billion in a biotech start-up over the next three years, according to Reuters. The company has been incubating the idea over the past six months, and CEO Robin Li is personally overseeing its development.

The start-up, which has yet to be named, will reportedly use Baidu's artificial intelligence (AI) tools to develop new drugs, diagnose tumors, and produce other "biological innovations." Baidu isn't expected to be the controlling shareholder in the new venture.

This wouldn't be Baidu's first step into the AI-powered healthcare market --earlier this year, it open-sourced its RNA prediction algorithm LinearFold to analyze viruses and develop vaccines. But will these new healthcare ventures move the needle for its core business, which still relies heavily on digital ads and its video streaming unit iQiyi (IQ -3.03%)?

Baidu controls over 70% of China's online search market, according to StatCounter. It generates most of its revenue from online ads scattered across its search engine, related portals, and mobile apps.

However, Baidu's ad revenue has declined year over year for five straight quarters due to competition from other ad platforms and the slowdown in China's economic growth. Competition seems to be the more pressing issue, since rival platforms like Tencent's messaging app WeChat, ByteDance's Douyin (known as TikTok overseas), and the anime and gaming platform Bilibili all generated stronger ad revenue growth than Baidu over the past year.

The decline of Baidu's ad business forced the company to rely more heavily on iQiyi, the video streaming unit it spun off in an IPO in 2018, for revenue growth. But iQiyi remains unprofitable -- and the higher mix of iQiyi's revenue is reducing Baidu's margins.

Analysts expect Baidu's revenue to rise less than 1% this year but for cost-cutting measures to boost its earnings by 6%. Those growth rates are anemic compared to Baidu's ecosystem rivals Tencent and Alibaba, which are both expected to generate double-digit revenue and earnings growth this year.

Why is Baidu expanding into digital healthcare?

It might seem odd for Baidu to invest money in AI-powered biotech tools considering the challenges it's facing. However, these investments could expand its broader AI ecosystem -- which already includes its Apollo driverless platform, domestic robotaxis, DuerOS virtual assistant, Xiaodu smart speakers, and various smart city tools and services. 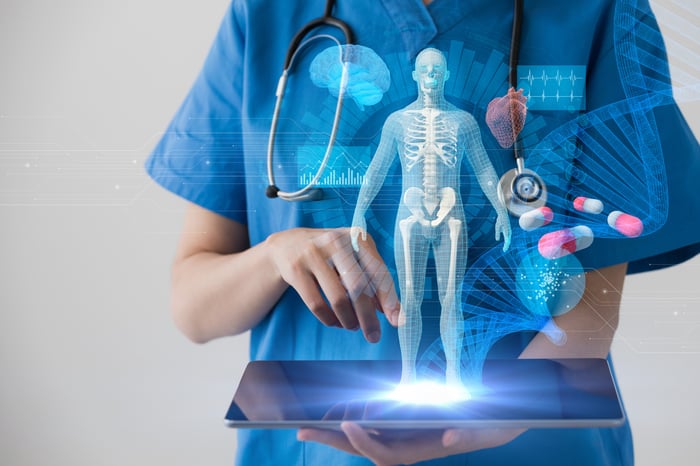 The development of this AI ecosystem could expand Baidu's search engine beyond PCs and mobile devices, which would widen its moat against Tencent, which is pulling away users with WeChat's Mini Programs and integrated searches, and Alibaba, which turned its online marketplaces into China's largest digital advertising platforms.

But just like Alphabet and its core Google business, Baidu will still generate most of its revenue from online ads for the foreseeable future. Baidu's AI efforts are impressive, especially in the fields of driverless cars and language processing, but they won't generate meaningful revenue or offset its dependence on ads or iQiyi anytime soon.