Please ensure Javascript is enabled for purposes of website accessibility
Log In Help Join The Motley Fool
Free Article Join Over 1 Million Premium Members And Get More In-Depth Stock Guidance and Research
By Evan Niu, CFA – Sep 11, 2020 at 8:45AM

The Mac maker should make more of its services available across platforms to broaden the appeal of the expected bundle.

Apple (AAPL 2.32%) has been rumored to have been working on a services bundle for over two years, and the offering may finally be ready to launch. This week, the Mac maker formally announced that it would be hosting a virtual product event next Tuesday with a "Time Flies" tag line. While there are some hopes that Apple will unveil the iPhone 12, it's possible that the company will focus on Apple Watch and iPad and host a separate iPhone event, according to Bloomberg.

See you in 7 days! #AppleEvent pic.twitter.com/zDXneII5di

Will the Cupertino tech juggernaut take the opportunity to announce the highly anticipated "Apple One"?

9to5Google reports that a recent update to the Apple Music app for Android includes references in the code to Apple One under the codename "Aristotle." Apple Music is one of the rare cross-platform subscription services that Apple offers; most services are only available on the company's own products. Unfortunately, there are no clues as to pricing. 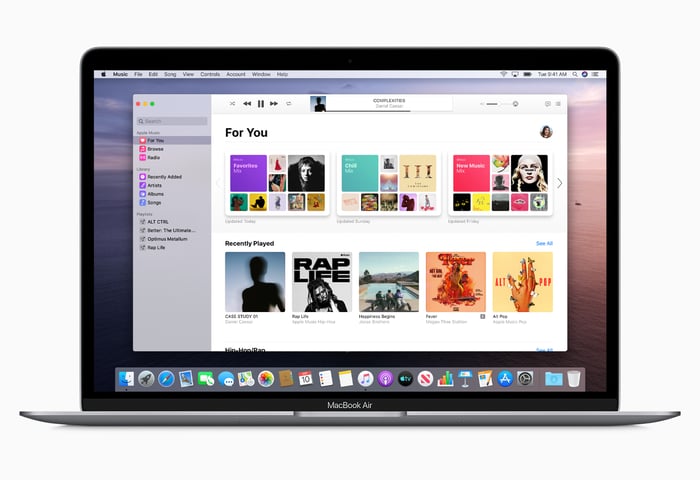 Perhaps the biggest unknown with the greatest strategic implications is whether Apple will make more of its services available on competing platforms, just like Apple Music. Apple has been aggressively expanding availability of its Apple TV app, which is effectively becoming a streaming platform that includes Apple's own service Apple TV+ in addition to third-party premium channels.

Both Apple Music and Apple TV+ -- both of which are cross-platform -- are expected to be included in the most basic tier of Apple One. Other possible tiers could include various combinations of Apple News+, iCloud storage, or Apple Arcade. There's even speculation that Apple might be working on a virtual fitness service that offers workout classes and could potentially compete with Peloton.

It would be difficult to make some of those services -- like Apple Arcade and iCloud Storage -- available on other platforms, as those offerings are inherently tied to Apple hardware, but adding support for other operating systems to other services could broaden the appeal of an Apple One bundle.

For instance, Apple is about to start redirecting regular web links from News+ publishers to Apple News in iOS 14 and macOS Big Sur for News+ subscribers. That move is controversial in itself, as critics argue that the tech titan is trying to hijack web traffic from publishers, potentially in order to strengthen bargaining leverage for the platform that some prominent publishers are already abandoning. Those criticisms aside, such a strategy would be far more effective if the company made Apple News a cross-platform service.

If Apple is as serious about growing its services business as it's been telling investors for years, it should make Apple One available to as many people as possible, regardless of what device they're using.