Please ensure Javascript is enabled for purposes of website accessibility
Log In Help Join The Motley Fool
Free Article Join Over 1 Million Premium Members And Get More In-Depth Stock Guidance and Research
By Rich Smith – Sep 12, 2020 at 8:07AM

Getting an accurate fix on SpaceX's costs is hard, but figuring out the trajectory of those costs -- down -- is easy.

How much does it cost to launch a rocket?

Historically, satellite launches conducted by NASA prime contractor United Launch Alliance (ULA) have cost taxpayers as much as $400 million per launch. But ever since Elon Musk entered the space race with his pioneering space company SpaceX, he's been working to drive that cost down by 75% -- or more.

Already, launches conducted by SpaceX's Falcon 9 and Falcon Heavy rockets, which cost as little as $62 million and $90 million respectively, have seriously undercut ULA's prices. Musk's challenge now is to drive those costs down even further. The more success he has with this, the harder it's going to be for publicly traded space companies like Lockheed Martin and Boeing (joint owners of ULA) to compete with SpaceX.

And last week, the SpaceX CEO told us how he does plan to succeed. 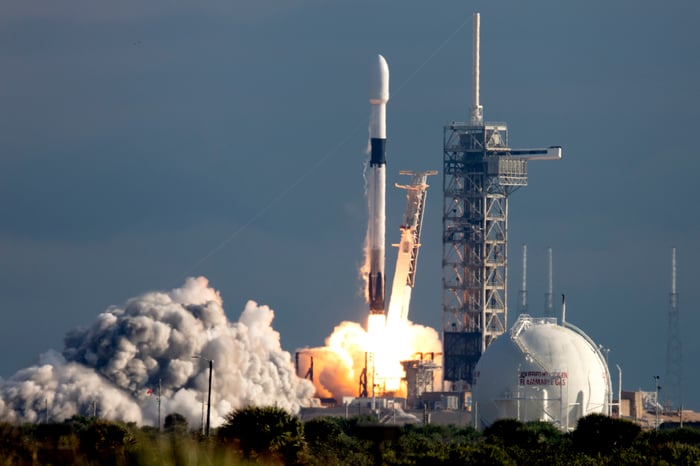 According to SpaceX's "Capabilities & Services" statement, a single Falcon 9 rocket, fully loaded with fuel and launching the biggest payload it can carry to Low Earth Orbit (22.8 metric tons), costs $62 million -- more than a 75% discount from what ULA used to charge.

That's the base price for launching a Falcon 9 rocket. But what about reusability? SpaceX has argued that firing off a rocket just once and allowing its two stages to burn up in the atmosphere is like building an airplane, flying a full load of passengers across the Atlantic -- and then junking the airplane on arrival. To get back home again, you'd have to buy an entirely new airplane.

In SpaceX's view, it makes more sense to design rockets so that they can be reused.

Now, to reuse a rocket, you must carry extra fuel up, so you have fuel to burn coming back down. Carrying that extra fuel, said Musk in comments relayed on Twitter, displaces the payload a Falcon 9 can carry by about 40%. And once the rocket has been recovered, it must be inspected and refurbished to ready it for relaunch -- adding perhaps 10% of the cost of building a new rocket.

As a result, says Musk, between the reduction in capability (~40%) and the cost of recovery and refurbishment (~10%), reusing a rocket roughly halves its efficiency relative to an expendable rocket's carrying capacity -- and roughly doubles the launch cost per kilogram.

... and how low is low enough for reusability to make sense

But that's just on the first launch, says the CEO: "You're roughly even [on cost] with 2 flights [and] definitely ahead with 3."

Payload reduction due to reusability of booster & fairing is <40% for F9 & recovery & refurb is <10%, so you're roughly even with 2 flights, definitely ahead with 3

So third time's the charm. And here's the thing: Last month, one of SpaceX's reusable Falcon 9s completed its sixth launch and landing.

Mathematically speaking, launching and landing a single Falcon 9 six times should be about half as expensive as building, launching, but not landing six brand new rocketships, enabling SpaceX to underprice its competition by at least half, and still remain profitable itself. Moreover, according to Musk, "there isn't an obvious limit" on how many times a Falcon 9 should be able to be reused. "100+ flights are possible" on a single rocket, although SpaceX would incur expenses covering the cost of replacing parts as they wear out.

And there may be room for further improvement. As SpaceX works to reuse more and more rocket parts, costs could fall dramatically. Consider that, on a single $62 million rocket launch:

Ultimately, Musk hopes to push the "marginal cost for a Falcon 9 launch ... down under $5 million or $6 million" -- i.e. just those costs "associated with the launch itself" -- by reusing every part of a rocket. Granted, if you add the costs for reconditioning those parts for reuse, that probably adds back another 10% (of $62 million). But even so, this probably pushes costs down below $12 million per launch for an entirely reusable rocketship.

Mind you, all of the numbers stated above are in flux. They seem to change just a bit every time Musk addresses the question of his cost structure. According to a recent column on Inverse.com, for example, Musk says the "best case" cost for a fully reusable rocketship would be $15 million. But whether the final answer is $12 million or $15 million -- or really, anything in that neighborhood -- the ultimate result is clear.

No one used to charging hundreds of millions of dollars for an expendable rocket launch is going to be able to match SpaceX prices in the low tens of millions. And that's the most important thing to know about the SpaceX Falcon 9 rocket: It's simply too cheap to beat.

Why Nio Shares Were More Than 6% Higher This Morning
351%