Staying away from these blunders will make you much wealthier.

Investing your money is a great way to grow wealth and set yourself up for a secure future. But if you're going to invest, the last thing you'll want to do is fall victim to these blunders that could leave you broke and miserable.

When the stock market crashes (which happens more often than we'd like), it's easy to immediately panic and start selling off investments before their value tumbles even more. But if you go that route, you're likely to lock in losses that could've otherwise been avoidable.

Remember, you only lose money in stocks when you sell investments when they're down. But some market downturns are only temporary, and if you sit back and ride them out, your portfolio can recover. Just look at what happened earlier this year. In March, stocks plunged into bear market territory, and many investors were convinced we'd be in for a prolonged down market. Instead, those losses were erased by August. 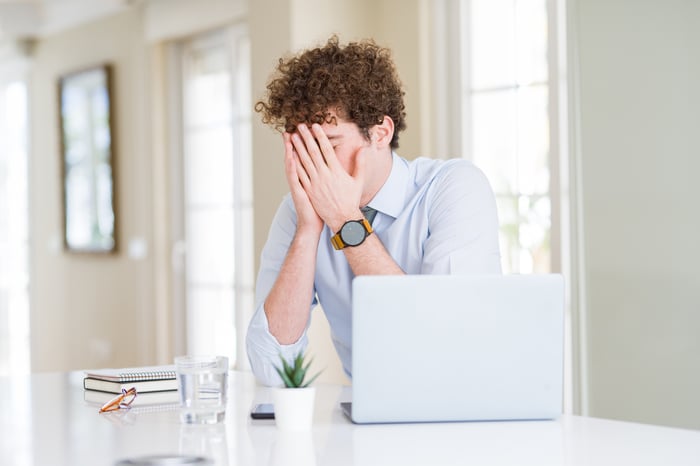 As a general rule, you should only keep money invested that you won't need for at least seven years so that you'll be in a good position to leave your portfolio intact when the market goes south. Stick to that system, and you shouldn't feel compelled to unload stocks the moment things take a turn for the worse.

2. Trying to time the market

Seasoned investors who have been following the stock market for years often struggle to time it, and the same thing is likely to happen to you. Predicting exactly when the broad market will rise or fall is extremely difficult, and it's a strategy that could cause you to lose out on money for no good reason. Rather than attempt to time the market, pledge to invest consistently.

A strategy called dollar-cost averaging can help you in this regard. In short, dollar-cost averaging involves investing a certain amount of money at predetermined intervals. For example, you might decide to invest $100 a week in a specific stock or set of stocks, rather than attempt to buy $400 worth of stock at one low point during the month. This way, you're more likely to end up with a lower average purchase price.

3. Holding losing stocks for too long

Not every stock you buy is guaranteed to be a winner, and frustrating as it may be to have an underperforming stock on your hands, you need to know when to cut your losses. If there's a stock that's been dropping in value since you bought it while the rest of your portfolio is thriving, you shouldn't hesitate to cut the cord. Holding onto that stock for longer could mean watching its value sink even further.

For many people, investing is a work in progress. You might start out with a certain strategy only to have it evolve over time as your budget and appetite for risk change. But whether you're first starting out as an investor or have been doing it for years, be sure to steer clear of the above mistakes. Doing so will help ensure that your portfolio serves you well, both in the near term as well as the long term.