A brief look at both positive and negative trends visible in the software-as-a-service specialist's recent performance.

Since cloud database platform provider MongoDB (MDB 9.05%) released its fiscal second-quarter 2021 earnings report on Sept. 2, its shares have experienced an extended swoon, falling 17% to date despite vigorous results. The reasons aren't hard to identify. Some investors chose to take money off the table despite the solid report -- the stock had gained roughly 80% year to date before the release. In addition, a choppy market environment in the first several days of September has further pressured shares. Let's take a step back, however, and look at four important themes from last week's report that will have a longer-term impact on share price than current selling pressure.

The professional services segment is a loss leader

At $5.8 million this quarter, the professional services segment makes up just 4% of total revenue. But importantly, the business is designed to make sure that new customers maximize their understanding and use of MongoDB's products early on. 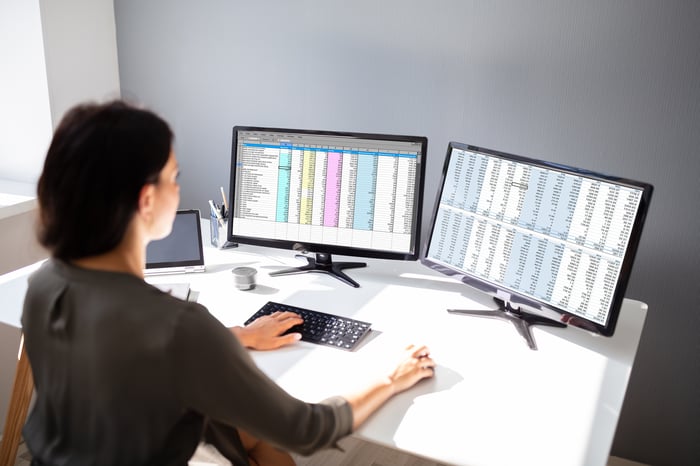 In the company's earnings conference call, management didn't directly attribute the gross margin drag to professional services, but rather to growth in the Atlas cloud database. Atlas is MongoDB's fastest-selling cloud-based software service. CEO Dev Ittycheria observed on the call that Atlas sales leaped 66% against the prior-year quarter, and now represent 44% of total company revenue.

Thus we can gather that the professional services segment, for now, is aimed squarely at onboarding new Atlas customers. Professional services is a loss leader,  compressing margin at present while paving the way for higher lifetime sales per customer.

A clear yield on investment in R&D

MongoDB increased year-over-year research and development expenditures by 33% in the second quarter, a hefty expansion rate that slightly trailed the quarter's 39% revenue growth. Of course, current-quarter R&D expenditures have little impact on current sales; rather, they entail a future pay-off.

To understand how investment in innovation is growing over time, and any correlated impact on sales growth, we really should examine the R&D spend over several periods. Here, I've charted both R&D expenditure and recorded revenue for the past eight quarters: 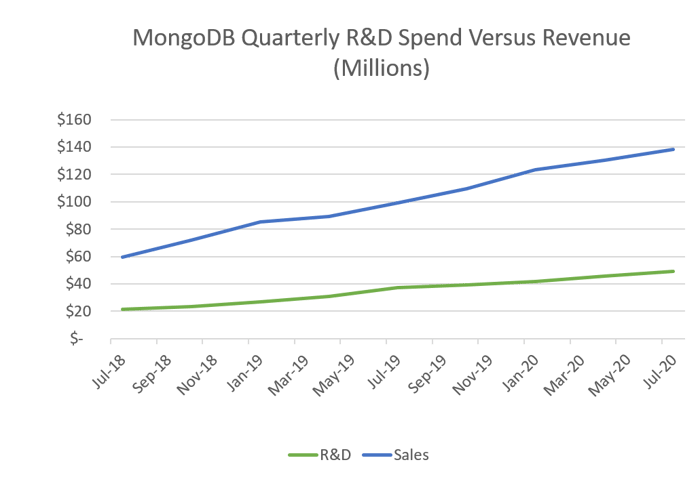 In the quarter ended July 31, 2018, MongoDB recorded $21.4 million in R&D expenditures. Fast forward to last week's report: The company's R&D spend of $49.3 million represents a cumulative increase of 130% in quarterly innovation investment over the past two years.

During the same period, quarterly revenue has jumped from $60 million to $138 million -- also a gain of 130%. MongoDB obviously enjoys a fairly direct relationship between innovation and revenue. Its allocation of resources to product development has so far proved an accurate indicator of top-line expansion.

Cash flow continues to flow in the red

For all its sales progress, Mongo DB still runs at a cash deficit. Negative free cash flow of $13.8 million in fiscal Q2 2021 was unchanged versus the comparable quarter, and in the first half of this year, this metric has nearly doubled to $21.2 million against the same period in fiscal 2020. This cash burn shouldn't concern investors too much, however: MongoDB has $975 million in cash and short-term investments on its balance sheet, thanks to a $1.1 billion convertible debt issuance completed early this year.

Nonetheless, this borrowing has created a profitability hurdle in terms of generally accepted accounting principles, or GAAP. Interest expense of $12.2 million in the second quarter was equal to nearly 25% of the company's operating loss of $49.8 million during the period, helping to drive total net loss for the quarter to $64.5 million.

In an impressive sign of selling strength during the pandemic, over the past two quarters, from Feb. 1 to July 31, MongoDB increased its share of customers generating annualized recurring revenue (ARR) of at least $100,000 by 9% sequentially from the end of fiscal 2020, from 751 to 819 customers.

Similarly, remaining performance obligation, or RPO, which is essentially deferred revenue plus all other unbilled contractual performance obligations, rose to $221 million, in comparison to $175.7 million at the end of the comparable period. MongoDB's healthy RPO, or revenue "backlog," is widening every quarter, and should provide a persuasive data point for shareholders looking for evidence that the organization can sustain its growth trajectory in the immediate future.

Why MongoDB Stock Was Falling Today
357%