Please ensure Javascript is enabled for purposes of website accessibility
Log In Help Join The Motley Fool
Free Article Join Over 1 Million Premium Members And Get More In-Depth Stock Guidance and Research
By Alex Carchidi – Sep 13, 2020 at 6:45AM

The ability to globally distribute a vaccine is as important as the vaccine itself. To the best-equipped victors go the spoils.

Competition in the race for a coronavirus vaccine is hotter than ever, as a smattering of companies make steady headway through their clinical trials. Early leaders like Moderna (MRNA -0.07%) are facing new pressure from pharmaceutical giants such as Pfizer (PFE 0.77%) and AstraZeneca (AZN 2.72%) as the market recognizes the increasing probability of multiple competing vaccine products by next year. At the same time, investors are carefully scrutinizing the competitors to determine which will have the manufacturing and distribution capabilities that will be required to capture a significant portion of global demand.

How can investors prepare for multiple companies to produce a successful coronavirus vaccine, given that it's difficult to predict which efforts will succeed at all? Maintaining a diverse portfolio of the most promising contenders is one possible answer to this question, but it isn't enough. Tossing vaccine developers' stocks into a basket doesn't account for the effect of competition on each company's market share or its bottom line. Let's envision a hypothetical situation in which two companies create an effective coronavirus vaccine to explore the effect of the competitive landscape. 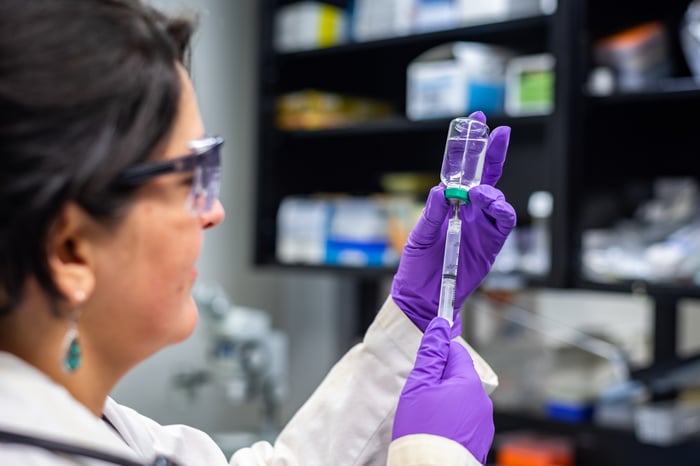 Biotechs may be outmatched by pharmas

Let's assume that one of two vaccine race winners is a biotech company along the lines of Moderna, and that the other company is akin to an established multinational pharmaceutical company like Pfizer. Let's also assume that the smaller and leaner biotech company earns the appropriate regulatory approvals to sell its candidate two months before the pharma company as a result of initiating the development process slightly faster at the start of the pandemic. This is a reasonable assumption, as Moderna dosed its first clinical trial participant on March 16, whereas Pfizer and its collaborator BioNTech (BNTX 2.68%) didn't start until more than a month later. Finally, let's assume that the competing prophylactics are indistinguishable in terms of their safety, tolerability, and efficacy so that they're easier to compare.

Right off the bat, it's obvious that the smaller company will struggle to manufacture enough doses to meet demand. Pfizer plans to produce at least 100 million doses this year, and around 1.3 billion doses of its inoculation using its manufacturing facilities by the end of next year if its candidate earns regulatory approval. Moderna, with minimal manufacturing capacity of its own, has initiated a slew of collaborations with larger companies that will only yield several hundred million doses in the same timeframe. Over the next decade, Moderna's collaboration with Lonza (LZAGY 8.64%) provisions for up to one billion doses per year, meaning that it will only match Pfizer's output after a lengthy lag.

Biotech vaccine developers will also be at a major disadvantage when it comes to product distribution. Pfizer and other large pharma companies maintain relationships with hundreds of different distributors worldwide. This means that when customers, such as hospitals, seek to purchase the company's vaccine, there is already a conduit in place that is able to facilitate the exchange. This conduit would reduce the amount of additional work and transaction costs required of the buyer and the seller alike. In contrast, many biotech companies like Moderna have no such infrastructure, so they'd need to build it from scratch to sell products at scale, incurring substantial costs and slowing vaccine deployment.

The implications of these disparities in manufacturing and distribution are difficult to overstate. In the first few years after safe and effective vaccines hit the market, larger competitors will be dominant simply because they won't need to scale up their operations as aggressively or make as many new partnerships to match global demand.

At best, a company like Moderna would get a slice of the market early on. At worst, it might struggle to maintain its position in the face of a larger competitor flooding the market with a less expensive yet equally effective product. The fact that the smaller company had a head start or an abundance of government funding through Operation Warp Speed (OWS) for research and development doesn't necessarily help it establish a massive foothold in the market.

If more than one company successfully produces a coronavirus vaccine, the next few years will probably be the most favorable for a company like Pfizer rather than one like Moderna. This isn't to say that you should avoid including biotechs in your coronavirus portfolio because they're too small to compete with the larger fish. Instead, it's prudent to weigh your investments according to each company's demonstrated ability and concrete plans to serve demand at a mass scale. Doing so will ensure that you're less exposed to potential downsides from weaker-than-expected sales stemming from insufficient manufacturing output, while also leaving you exposed to the upside from successful vaccine deployment. If you're lucky, you'll have a handful of different winners in your back pocket.