Companies are trying to figure out the best strategic moves.

The Nasdaq Composite (^IXIC 0.03%) has finally faced some struggles over the past week or so, but Monday morning seemed to bring some respite for the benchmark index. Greater optimism about the potential for a COVID-19 vaccine helped to bolster sentiment among investors. That helped send Nasdaq futures up more than 1%. The Invesco 100 Trust (QQQ 0.01%) posted similar pre-market gains.

Also driving interest in Nasdaq stocks were some big deals. Both NVIDIA (NVDA 0.98%) and Gilead Sciences (GILD -0.91%) made big moves in mergers and acquisitions (M&A), showing that in areas like technology and biotech, there's a lot of demand for trying to find ways to grow in a fiercely competitive industry environment. 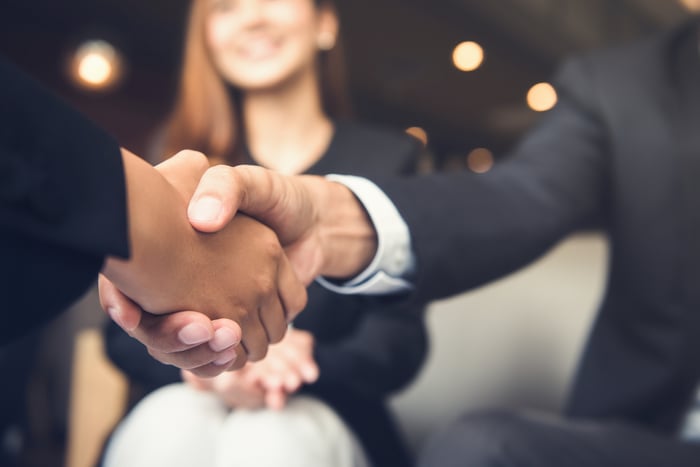 NVIDIA gets hungry for chips

Shares of NVIDIA were up 6% in pre-market trading Monday morning. The graphics chip giant is looking to make the biggest acquisition ever seen in the semiconductor space, fighting back at rivals that have done a good job of retrenching and challenging some of its fast-growing business.

NVIDIA will pay about $40 billion to acquire the Arm Holdings unit of SoftBank (SFTB.Y 0.27%). The merger would combine NVIDIA's artificial intelligence (AI) computing platform with Arm's ecosystem, creating what NVIDIA sees as the premier AI company. SoftBank will own a stake in NVIDIA, but it's expected to be less than 10%.

However, industry experts expect fierce opposition to the deal from several quarters. Arm's customer network has global reach and includes many of NVIDIA's biggest rivals. Arm has also taken a more open-licensing approach toward its intellectual property, and any threat to that model could raise an outcry from customers, especially in South Korea and China.

To address that issue, NVIDIA will keep Arm's headquarters in the U.K. and keep open licensing intact. Yet that won't be enough to satisfy every Arm customer. It'll be interesting to see what plays out as the approval process moves forward.

Elsewhere, Gilead Sciences stock was down about 1.5% in pre-market trading. The biotech giant announced a major acquisition that helped shares of Immunomedics (IMMU) more than double Monday morning.

Gilead will spend $21 billion to acquire Immunomedics, the companies announced late Sunday. The deal values Immunomedics at $88 per share, which shareholders will receive in cash. Gilead hopes to close the deal before the end of the year.

The acquisition has the clear benefit of adding Immunomedics' Trodelvy treatment for breast cancer to Gilead's developing oncology product line. Trodelvy recently got accelerated approval from the Food and Drug Administration to fight breast cancer, and analysts expect the antibody-drug conjugate to reach multibillion-dollar levels in annual sales.

It'll take awhile for Gilead to reap the benefits on its bottom line, as the company expects it to be neutral to accretive to adjusted earnings in 2023. After that, though, the buyout should be a big bonus for Gilead. Shareholders have to hope that the biotech company isn't paying too much for the promise that Immunomedics offers.