Please ensure Javascript is enabled for purposes of website accessibility
Log In Help Join The Motley Fool
Free Article Join Over 1 Million Premium Members And Get More In-Depth Stock Guidance and Research
By John Ballard – Sep 14, 2020 at 8:31AM

The video game powerhouse is releasing new sports titles this fall into a larger installed base of players.

Millions of new gamers have joined Electronic Arts' (EA -0.89%) EA Player Network since the beginning of April. Gamers were highly engaged during the pandemic, which resulted in strong earnings for the company last quarter, but the lingering question on investors' minds has been how long this period of heightened player activity might last.

The latest sales data for Madden NFL 21, which was released on Aug. 28, might hint at the answer.

EA reported that sales of the new Madden are up nearly 20% year over year in the first week after release. The game is also being played more with over 17 million games played in the new mode, The Yard. 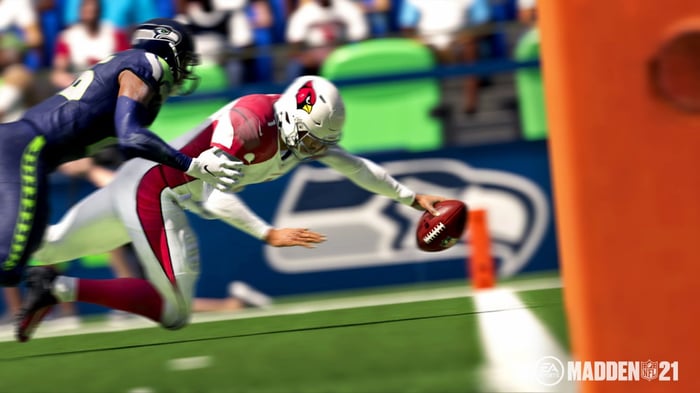 This comes after Madden NFL 20 experienced its own record year for the franchise with the highest engagement levels in its history. Madden NFL 20 contributed to a strong fiscal first quarter of growth in EA's live services business, which grew net bookings 61% year over year to $1.1 billion. Live services include in-game spending on Madden and FIFA Ultimate Team.

Player acquisition in Madden NFL 20 was up 140% year over year last quarter. This trend also played out in FIFA 20, which attracted seven million new players. As Chief Operating Officer Blake Jorgensen said during the July earnings call, "This is significant, in that people who have played the game recently are more likely to buy the new one."

That certainly seems to be the case with Madden. The growth in sales for the newest version comes after CEO Andrew Wilson explained previously that the consumption of sports and entertainment is moving from linear to interactive. "We've seen both of these trends accelerate during the COVID-19 period," he said.

What's on tap next quarter

If sales of Madden 21 are any indication, EA may end up having a very strong fall season of gaming and continued growth in live services revenue.

Upcoming sports releases include FIFA 21 on Oct. 9 and NHL 21 on Oct. 16. "We have more people than ever before playing and connecting through FIFA, and when FIFA 21 launches on Oct. 9, the world's leading football experience will expand with more ways to play with friends," Wilson said during the last call.

Later this year, EA will also have updated versions of FIFA 21 and Madden 21 available with the launch of the Sony PlayStation 5 and Microsoft Xbox Series X.

In light of the significant outperformance on revenue and net bookings last quarter, management raised its full-year guidance for those metrics to $5.63 billion and $5.95 billion, respectively. For net bookings, that would represent growth of 11% over fiscal 2020 (which ended in March).

However, that guidance was based on a cautious near-term view, which assumed that EA would continue to see a modest tailwind in engagement. Management also considered the impact of a weak economy on sales and the slightly delayed launches of sports titles. For example, FIFA 21 is releasing in the company's fiscal third quarter instead of its second.

But with players remaining engaged with Madden, and with the unemployment rate down from its April high of 14.7% to 8.4% in August, EA seems to be in great shape as it heads toward the end of 2020.

The only caveat is that some of Madden's revenue may be pushed into next year due to some Ultimate Team events being delayed, given that EA's employees are working on games from home. But this will only pad next year's results for this top video game stock that has already risen 17% year to date.

Should You Buy Electronic Arts Stock?
356%