If you're retired, you're probably looking for stocks that offer dependability and a (preferably growing) dividend. Your primary concern is likely wealth preservation, or getting income to supplement Social Security payments and increase your standard of living.

Retirees thus have a conundrum in this age of change. While today's disruptive growth stocks are exciting, they usually don't pay dividends, and often come at expensive -- and therefore risky -- valuations. At the same time, many tried-and-true blue chip stocks of yesteryear have fallen on hard times. Take a look at the struggles of "old" U.S. corporate stalwarts General Electric, Boeing, or even the mighty ExxonMobil, which just got booted off the Dow Jones Industrial Index after being one of its mainstays for 92 years.

So where are retirees to turn? Have no fear. Even for retirees, there are still plenty of stocks out there that offer staying power, growth prospects, and a nice dividend as well. If you're retired, consider investing in the following well-positioned dividend stocks for the long haul. 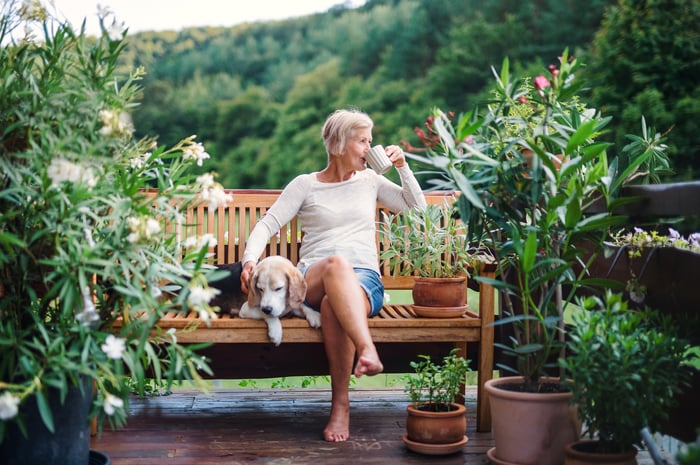 Professionals often instruct retail investors to "invest in what you know." As the No. 1 broadband and cable provider in the U.S., Comcast (NASDAQ:CMCSA) is familiar to many.

Comcast's core broadband business has made it resilient to the COVID-19 turbulence, and its NBCUniversal unit is set to bounce back with the economy as advertising recovers and consumers return to its Universal Studios theme parks.

Yes, the NBCUniversal part of Comcast's empire is hurting right now, but the company still generated $6 billion in free cash flow during the pandemic-plagued second quarter. That covered the company's $1.1 billion dividend payment many times over. With the return of live sports and the economy recovering from the recession, expect Comcast's profits to grow.

That should continue to fuel Comcast's dividend, which currently yields 2.1%, but has grown 6.5 times over since 2009. While cord-cutting has been a concern for some in the cable industry, Comcast's broadband and new wireless offerings, combined with the introduction of its new streaming service Peacock, mean that management is adapting well to industry changes. In any case, Comcast's recent results in trying times only reinforce that it's a rock-solid dividend stock that retirees can own without worry for years to come.

Speaking of resilient stocks, Brookfield Infrastructure Partners (NYSE:BIP) (NYSE:BIPC) gives retirees a nice dividend that should provide long-term growth in good times and bad. Now that the company has split its shares into both partnership units and corporate shares, investors have the option of investing either through the partnership -- which currently yields 4.2%, but comes with some tax headaches for unitholders -- or the shares, which currently yield 3.7%.

As its name implies, Brookfield buys and owns infrastructure assets on a diversified global basis across utilities, transportation terminals, energy transport, and data infrastructure. Fixed-fee contracts back about 95% of the EBITDA of these assets, providing resilience in economic downturns. Moreover, Brookfield targets about 6%-9% organic growth from these assets based on rate increases, increases in GDP, and the reinvestment of cash flows above and beyond the distribution. Brookfield recently grew its distribution 7% over the prior year, even in the economic turmoil of the pandemic-plagued second quarter.

Brookfield's solid dividend beats the 10-year Treasury yield seven times over. When you consider Brookfield's history of growth and market-beating returns, this infrastructure stock seems like a prime candidate for any retiree's portfolio.

While the semiconductor industry is often regarded as volatile, large and diversified chipmakers really should be part of retirees' stock portfolios. Even older investors should have exposure to the big tech trends of today, including 5G, artificial intelligence, and the Internet of Things. Technology companies might be the new blue chip industrials of this century, and ignoring this sector could mean missing out.

Broadcom (NASDAQ:AVGO) is one of the safest, highest-yielding chipmakers. A product of the massive 2016 merger between Broadcom and Avago, the combined company makes leading semiconductors across a host of digital applications, from data centers and connected devices to mobile handsets and industrial automation.

As if that weren't enough diversification, Broadcom recently branched out with the acquisitions of CA Technologies in 2018 and Symantec in 2019, gaining exposure to application development and cybersecurity software. Currently, these software businesses make up a little less than a quarter of Broadcom's revenue, adding a nice recurring income stream to even out the volatility of chip sales.

Broadcom's dividend currently yields about 3.65% and is well-covered almost three times over by the company's ample free cash flow. In its recent quarter, Broadcom managed to grow revenue by 6% and free cash flow by a whopping 33%, showing off nice resilience in the pandemic economy.

With next-gen technology applications set to continue growing over the next decade and beyond, Broadcom looks like a solid bet to maintain and grow its dividend in the years ahead, making this a good tech stock for retirees.