Please ensure Javascript is enabled for purposes of website accessibility
Log In Help Join The Motley Fool
Free Article Join Over 1 Million Premium Members And Get More In-Depth Stock Guidance and Research
By Prosper Junior Bakiny – Sep 15, 2020 at 6:18AM

The biotech is facing several headwinds. Should investors get on board anyway?

Biogen (BIIB -2.15%) hasn't had the best year -- and not necessarily because of the COVID-19 pandemic. Back in June, a judge invalidated a patent on Tecfidera, which is the biotech's best-selling drug. Because of this decision, Biogen will face generic competition for Tecfidera from Mylan, and this competitive pressure could lead to lower sales volume for the multiple sclerosis (MS) drug.

The drama surrounding Tecfidera is one of the reasons Biogen's stock has been so volatile all year long. As of this writing, the company's shares are down by 9.5% since Jan. 2. However, there is much more going on with Biogen, and before deciding whether it is a good biotech stock to buy, let's dive a little deeper into its business and financial performance. 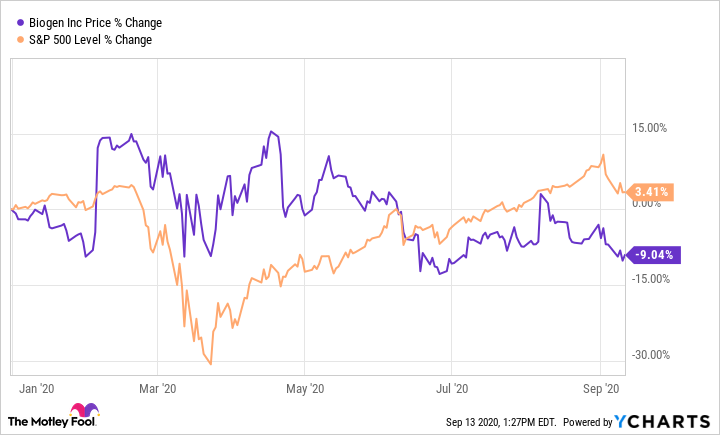 Biogen benefited from a couple of positive bumps during its second quarter, which ended June 30. Product revenue got a $100 million boost thanks to higher sales caused by the COVID-19 pandemic, and "other" revenue jumped by 155% year over year, to $408 million. Management attributed the latter growth to the licensing of manufacturing-related intellectual property to one of its partners (the company did not specify which). Despite these favorable developments, Biogen's total revenue increased by a meager 2% year over year to $3.7 billion.

Tecfidera saw a revenue increase of about 3% to $1.2 billion, accounting for roughly 32.1% of the company's total. Meanwhile, Biogen's Spinraza, which is used to treat spinal muscular atrophy, posted sales of $495 million, 1% higher than Q2 2019. Spinraza was Biogen's second top-selling product during the quarter. The company's third best-selling medicine was MS drug Tysabri, but its sales dropped by 9% year over year to $432 million, in part because of lower demand caused by the COVID-19 pandemic. 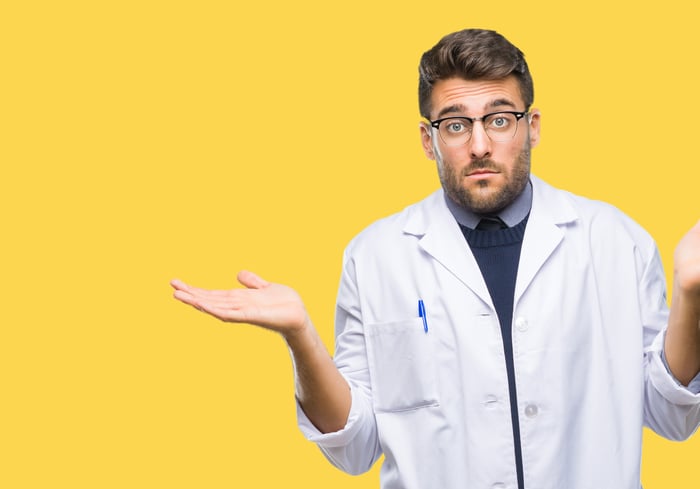 On the bottom line, Biogen recorded net income under generally accepted accounting principles (GAAP) of $1.5 billion, a 3% year-over-year increase. However, the company benefited from $103 million in unrealized gains from equity investments it made in Sangamo Therapeutics and Ionis Pharmaceuticals. Overall, Biogen's Q2 results were not that encouraging, despite the fact that they came in ahead of analyst estimates.

Biogen has been developing a treatment for Alzheimer's disease (AD) called aducanumab, but the process has been rocky. In March 2019, the company dropped the project when aducanumab failed to prove effective in a phase 3 clinical trial. But in October 2019, Biogen said it would seek regulatory approval for the drug after all. What changed? The company argued that analysis of a larger data set from the aforementioned clinical trial revealed that AD patients treated with aducanumab "experienced significant benefits on measures of cognition and function."

The company submitted the medicine once more to the U.S. Food and Drug Administration (FDA) in July, and the health industry regulator granted it a priority review this time, which will expedite the process. There are currently no approved treatments for AD, and in the U.S., there were 5 million people living with the disease as of 2014, according to the Centers for Disease Control and Prevention (CDC). That number is projected to continue growing, which means there is a large and untapped market opportunity for Biogen in this segment. But that's only if aducanumab earns regulatory approval, which is far from a sure bet at this point.

Biogen has other things going its way. The company is currently working on more than two dozen clinical trials -- including at least six phase 3 studies -- and it could add more products to its lineup as time goes by. One of these experimental drugs is called BIIB059, and it is being developed as a treatment for lupus, an inflammatory disease in which the body's immune system attacks its own tissue. There are few treatment options for this condition, and it affects approximately 800,000 in the G7 countries (the U.S., the U.K., Canada, France, Germany, Japan, and Italy).

Also, with a forward price-to-earnings ratio of 7.71 -- and a price-to-earnings growth ratio of 0.29 -- Biogen's shares are currently attractively priced. I think its stock will remain highly volatile in the near term, in part because I expect the FDA to reject the company's new application for aducanumab, which could cause its stock to fall off a cliff. Biogen's stock is worth considering for long-term investors, as the company has a deep enough pipeline to eventually turn its recent misfortunes around. That said, I'd advise against buying shares of this biotech stock today; instead, investors should wait until after the aducanumab decision to initiate a position.