Earlier this year, Warner Music became a publicly traded company offering 77 million shares of stock at a price of $25 per share. Despite the successful IPO, COVID-19 has been a dark cloud over the company, as fewer people have purchased physical copies of albums from brick-and-mortar stores. However, the growth from digital music streaming has provided some silver lining for investors. 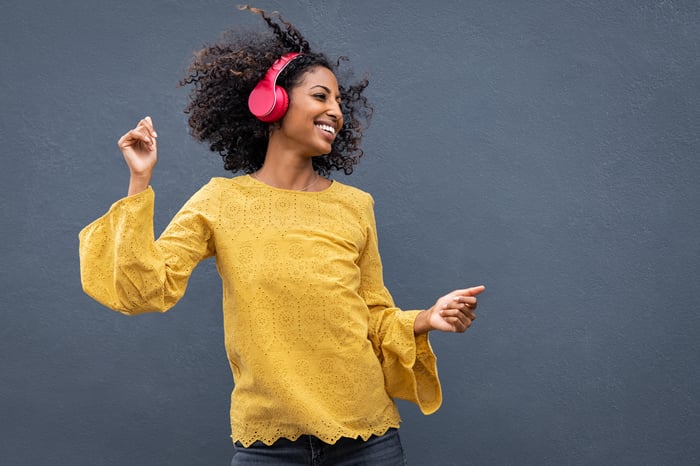 The impact of COVID-19 on Warner Music

When Warner Music reported its third-quarter 2020 earnings (period ended June 30), it showed that it wasn't completely immune from the coronavirus pandemic. Despite posting a 10% increase in digital music revenue, overall revenue still fell 5% in Q3 due to a decline in physical music sales and unfavorable currency exchange rates.

The company's total revenue was somewhat stable because of strength in digital music streaming. Fans still wanted to listen to music from their favorite artists and could still purchase music at home or listen to their favorite streaming services. The good news is that digital revenue now accounts for over 70% of total company revenue, so even if the coronavirus pandemic continues to be an issue in 2021, the company should still be able to generate most of its revenue online.

It makes sense that sales of music from retail stores fell in 2020 -- many malls and record stores around the country have had to close at some point during the pandemic. Warner Music has told investors to expect physical music sales to recover in 2020 as stores reopen; however, physical sales of recorded music were decreasing significantly prior to the pandemic.

With physical music sales in long-term decline, the investment bull case for Warner Music rests on the continued growth from digital channels. Market trends indicate that digital should continue to be a bright spot for years to come. This is largely driven by the popularity of platforms such as Spotify, which have made it easy for anyone to take their entire music library with them wherever they go.

As smartphones become more ubiquitous and mobile internet speeds around the world continue to accelerate, digital music should only increase its penetration of the overall music listening pie. For these reasons, digital music is more commonplace in developed countries like the U.S., Germany, and France. However, many emerging market countries such as China and Brazil are well-positioned to see digital take off because most people already have mobile phones -- they just may not have internet plans ready for streaming.

One of the great things about digital music is that the internet removes the importance of geographic barriers. It is much easier for an artist to get their catalog into another country online than it is to get their physical copies in retail stores. Record labels like Warner Music are seizing this opportunity. Warner has been establishing a greater global presence by opening new offices around the world focused on marketing and promotion. The company has also started to cultivate local artists in a push to become a truly global company and fully capitalize on its international potential.

The pandemic did impact Warner Music's business. In spite of the headwinds and lower physical album sales, the company managed to grow its operating income due to digital music delivering a higher margin stream of revenue. Warner is well-positioned to benefit from widespread smartphone adoption and the popularity of services such as Spotify. Music fans can now listen to their library whenever they want, where ever they want, and the company is collecting a healthy share of royalties from that listening time.

Is Warner Music Stock a Buy After New CEO Hire?

This Beaten-Down Stock Could Be Music to Investors' Ears