The basketball shoe, researched for a year, is said to include special engineering for women's physiology.

The UA HOVR Breakthru is a thoroughly researched women's basketball shoe announced today by Dick's Sporting Goods (DKS 0.19%) and Under Armour (UA 2.49%) (UAA 2.95%), the two companies teaming up to make the shoe available. According to Under Armour's President – North America, Stephanie Pugliese, the freshly released shoe "was designed by a team of extraordinary women" and is "tailored specifically with the female basketball player in mind."

Working to put its best foot forward, Under Armour spent a year researching in preparation for HOVR Breakthru's launch. The basketball shoe, which retails for $109.99, is described as including features designed to match up to the female foot's physiology, which is said to have such characteristics as "greater flexibility, a narrower heel and the higher percentage of sensory receptors." 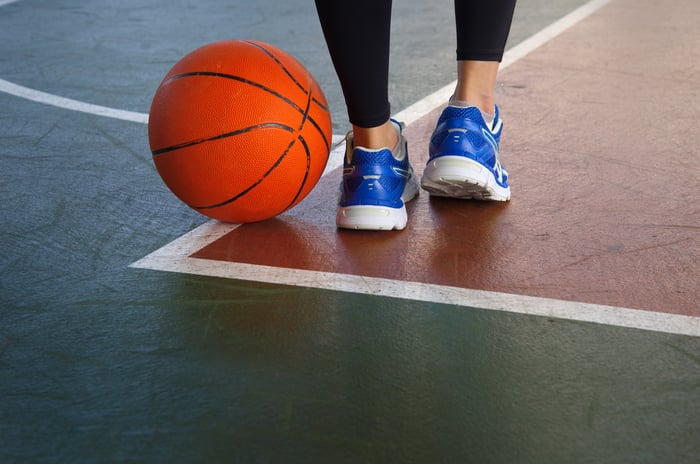 The shoe is noted as being close-fitting, incorporates "energy return" cushioning already used in other HOVR products, and is flexible, soft, and lightweight compared to basketball shoes designed for men.

While Under Armour is producing the shoe, the press release indicates Dick's came up with the concept originally. Its president, Lauren Hobart, remarked that the sporting goods company "saw a gap in the market for a basketball shoe developed specifically for women" but "needed the support from a major footwear brand to create this type of shoe." The shoes will be sold exclusively through Under Armour and Dick's outlets, both brick-and-mortar and online.

Dick's Sporting Goods saw its sales plunge 30% in its first quarter as COVID-19 slammed the U.S. economy, but has since posted red-hot gains, climbing close to its all-time record share price of $61.59, set four years ago in September 2016.