Please ensure Javascript is enabled for purposes of website accessibility
Log In Help Join The Motley Fool
Free Article Join Over 1 Million Premium Members And Get More In-Depth Stock Guidance and Research
By Herve Blandin - Sep 15, 2020 at 7:45AM

When Zscaler (ZS 4.80%) last week released its strong results for its fiscal 2020 fourth quarter (which ended on July 31), it also revealed a potentially troubling shift in its plans.

CFO Remo Canessa announced that the company was postponing its long-term profitability goal to improve its non-GAAP (adjusted) operating margin to the 20% to 22% range when annual revenue reaches the $800 million to $1 billion range. Should shareholders worry about that decision?

Thus, the spring's shelter-in-place orders and the widespread decisions by businesses not to bring employees back into offices yet have driven new clients to the company. Its fiscal fourth-quarter revenue increased 46% year over year to $125.9 million, exceeding the guidance range of $117 million to $119 million.

That also suggests the company is gaining market share. The research outfit MarketsandMarkets estimates the global cloud cybersecurity market will grow at a much lower -- yet still attractive -- compound annual growth rate of 14.7% through 2025.

Over the last several years, management prioritized growth over profitability while the company worked to gain scale. Illustrating the results of that strategy, in Q4, Zscaler's losses deepened to $49.5 million, compared to $5.3 million one year ago, as its sales and marketing spending grew to 71% of revenue, up from 57% in the prior-year quarter.

So far, the added scale has failed to improve the company's operating margins because of those high sales and marketing expenses. 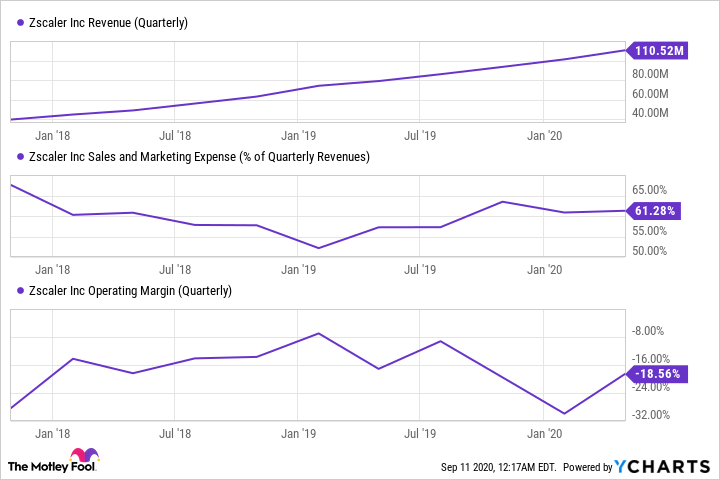 However, management had reiterated over the last several quarters that it had confidence in improving profitability, and it put forth the goal of reaching a non-GAAP operating margin of 20% to 22% by the point that the company was generating $800 million to $1 billion in annual revenue. Given Zscaler's strong double-digit revenue growth and based on analysts' expectations, the company should attain that revenue range by fiscal 2023.

But Canessa said during the earnings call he will now aim to hit that non-GAAP operating margin range of 20% to 22% in fiscal 2024 instead, as the company will keep prioritizing growth to capture significant market opportunities.

That shifting long-term goal doesn't alter the investment thesis for this tech stock, though: Zscaler remains a high-growth cloud cybersecurity specialist that prioritizes scale over profitability. However, shareholders should take the update with a grain of salt.

But postponing its effort to reach those operating margins means Zscaler will spend a higher-than-expected percentage of its revenue over the next few years to fuel its growth. In addition, management didn't provide a long-term revenue growth target, which leaves hazy the magnitude of extra revenue these higher expenses are expected to bring.

Beyond the non-GAAP operating margin

Besides, even if you weigh Zscaler based on that inflated non-GAAP operating margin, the valuation remains demanding. Let's assume:

Based on these suppositions, Zscaler stock is trading at 62 times its estimated operating income of $282.75 million in fiscal 2024.

That lofty valuation ratio indicates the market expects the company to gain market share over the next several years in a crowded, competitive environment while significantly improving its margins. And even if that happens, the upside potential of the stock seems limited.

Therefore, shareholders shouldn't focus on the company's shifting profitability long-term goal. Instead, they should realize the market is already pricing flawless execution into this stock no matter how management balances growth and profits, which doesn't leave much margin of safety.

Is Zscaler a Top Stock to Buy Now?