Legacy cable companies are among the cheapest in today's market. People are abandoning the legacy cable bundle in droves. In 2013, there were over 100.5 million cable bundle subscribers. By 2023, research firm eMarketer expects that number to fall to just 72.7 million.

With declining numbers, investors have been selling off legacy cable network companies that may not have the scale to compete in the streaming world. But has the hate gone too far?

Cable network AMC Networks (NASDAQ:AMCX) -- the channel that brought you The Walking Dead, Mad Men, Breaking Bad, and Killing Eve -- thinks so. It's putting its money where its mouth is in a massive buyback. Should you follow management and gobble up some shares, which are down 47% on the year? 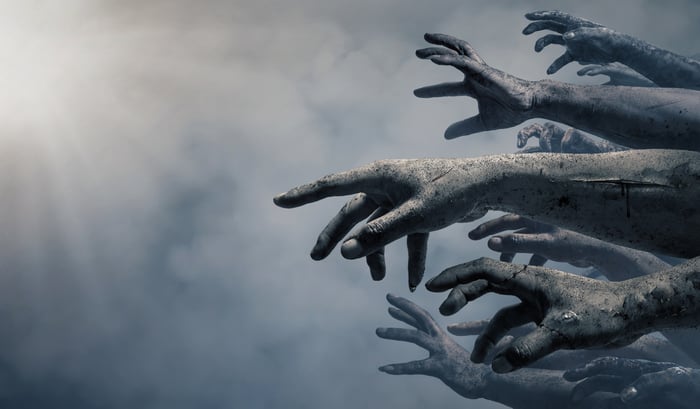 On Tuesday, AMC Networks management announced the launch of a Dutch tender to buy $250 million of its shares at a price between $22.50 and $26.50 per year. The stock responded by shooting up over 21% the next day. Yet even after the stock surge, the company's entire market cap, based on its $25.18 share after Wednesday's trading, was $1.31 billion. The buyback would equate to around 19% of shares outstanding.

That's quite a hefty amount of shares to buy back all at once, especially considering that it builds on $120 million of buybacks through the first six months of the year. Management is taking the buyback opportunity since shares have fallen almost 50% this year and 65% over the past three years. 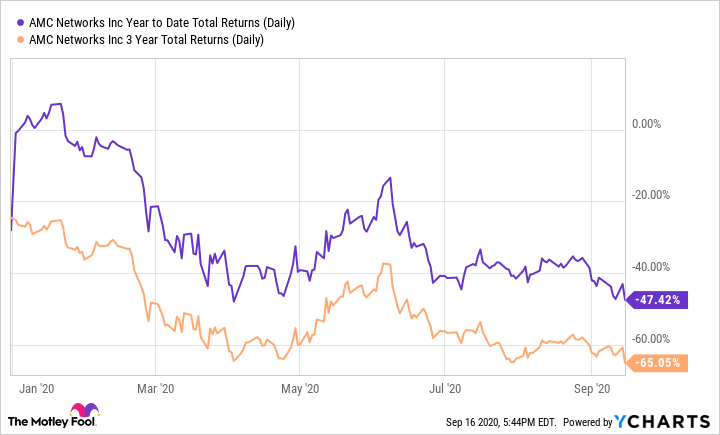 What's even more remarkable is that the company itself had $890 million in cash and cash equivalents at the end of the second quarter, after generating $392 million in free cash flow in the first six months of the year.

Of course, some of that free cash flow generation was due to the fact that the company saved cash by not having production up and running during the post-pandemic period, though even in the first six months of 2019, AMC generated $230 million in free cash. CEO Josh Sapan said, "AMC Networks has a strong financial position and the proposed tender offer is a significant expression of strength and the Board's confidence in our company's future."

So is this stock the steal of the year? Or a value trap?

There's some legitimacy to the pessimism around AMC's stock price. In the second quarter, revenues fell 16.3% as cord-cutting and an advertising slump dented the company's results. The company also took a massive $130 million writedown of its international business, which continues to generate losses.

Seeing the writing on the wall, the company has launched a slew of over-the-top streaming channels with its niche brands. These include Acorn TV (British cinema), Shudder (horror), Sundance Now (indies and documentaries), and UMC (Black programming). Recently, the company also launched AMC+ based on its namesake cable network, along with We+, or women's entertainment.

While the company's cash is over half of its market cap, AMC also has a not-insignificant $2.9 billion or so in debt. While the stock is incredibly cheap on a market cap basis, on an enterprise value basis, it's a bit more expensive. A high debt load also gives the company the possibility of bankruptcy, although I think that's a long shot at this point.

How management could right the ship

Aside from buybacks and launching its niche OTT streaming channels, management is also making moves to fundamentally strengthen the business.

AMC was the first network to joint On Addressability, a consortium of the leading cable providers that will amalgamate viewer data to better target ads, much like data-rich social media companies do. AMC is also participating in OpenAP, another targeted ad consortium, as well as Xandr, another ad exchange.

The company also debuted channels on free or low-cost streaming services PlutoTV and Sling, which should help offset some of the flagging ad revenues from linear. AMC also just reacquired the rights to Mad Men, the hit show that originally aired on AMC years ago. That will likely bolster the launch of AMC+.

Whether AMC's portfolio of niche channels will generate the scale needed to offset declines is an open question. The multiple streaming channel strategy is a new one. AMC doesn't really have the broad audience programming of the large streamers or even of legacy cable networks looking to make a similar transition, like rival ViacomCBS (NASDAQ:VIAC).

Nevertheless, Sapan maintains that because these are targeted, slimmed-down programming OTT channels, AMC won't need tens of millions of subscribers for them to be profitable. Management also noted that 80% of its streaming subscribers subscribed to another large streaming bundle, so streaming is not a winner-take-all market.

As they say, time will tell. However, there's no denying the stock is cheap based on current numbers. If AMC can merely stay afloat and generate its current level of cash, this value stock could skyrocket. However, if its OTT offerings and ad tech improvements don't catch on and linear TV's decline accelerates, all bets are off.

AMC Networks Is Buying Back 20% of Its Stock. Should You Follow? @themotleyfool #stocks $AMCX $VIAC Next Article
Current